Flying Against The Odds is the story of one man’s remarkable journey that began 17 years ago. It took him from staring death straight in the eyes to surviving aggressive kidney cancer.

The author is recently retired Air France pilot Jean-Jacques “JJ” Trochon. Once you know that, it’s easy to understand the book’s title. Firstly, it’s as much literal as figurative testimony to the power of the human spirit. Secondly, it’s a metaphor for finding the strength to face fear. Thirdly, it’s about turning fear into the courage and commitment needed to survive a dread disease.

Lastly, it gives renewed hope to all those fighting cancer. Flying Against The Odds charts a heady mix of the power of modern (orthodox) medicine and ancient, evidence-based complementary methods. The subtitle also speaks volumes: One Man’s Journey to New Ways of Healing. That journey has involved negotiating the turbulence of disease relapse. And redirecting energy in body and mind towards health.

Trochon’s co-author and “co-pilot” is wife Heather, a translator by profession. In a poignant introduction, she writes of supporting him “from the wings” as he has navigated his “personal storm”.  And as any pilot knows, “only as a team is it possible to land safely when the going gets tough”.

Flying with an elite team

Theirs is a shared journey with an elite team of experts Trochon gathered as his guides to safe landings. Many have become close friends. Among them are:

One of this book’s many strengths is the valuable insight into these experts’ work. Just as importantly, readers get to know Trochon’s “four pillars of health” firsthand:

Most importantly, as Seyfried writes in the comments section, the pillars “selectively target the abnormal metab­olism and blood vessels (angiogenesis) of malignant tumors”. Escudier adds that Trochon’s boundless enthusiasm for life convinced him that doctors should evaluate the ketogenic diet and metabolic treatment as “novel” cancer therapies.

Crucially for the book’s integrity and reliability of information, Trochon built the pillars on compelling evidence for diet and nutrition to treat cancer.  He presents them clearly as adjuncts to (in addition, not instead of) conventional cancer treatment. 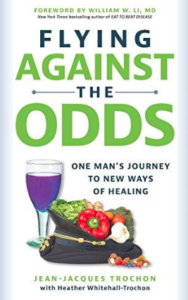 Critically too, Flying Against The Odds documents consistent support from Trochon’s oncology team. They showed remarkable openness of mind and acceptance that orthodox medicine does not have all the answers. Above all, they worked compassionately with him and kept a watchful eye on his progress.

Trochon writes movingly of the moment in France in 2003 that first led doctors to diagnose aggressive kidney cancer. He had been feeling sharp pains in his lower back and went to the toilet to urinate. At that instant, what he saw terrified him.

‘I knew I was in serious trouble’

“Bright red blood,” he writes. “An alarming fire-extinguisher red, which was practically glowing against the stark white of the toilet bowl. I had blood in my urine. Or, to be more precise, urine in my blood! In a moment of absolute clarity, I knew I was in serious trouble.”

Doctors at a clinic he rushed to, knew it too. Within 24 hours, surgeons had removed a large, malignant tumour and one kidney. His oncology team suggested the possibility of chemotherapy and radiation in few months, depending on his progress.

Trochon started reading and building his pillars. That began with changing his diet, dramatically reducing his intake of sugar and other carbohydrate foods. He did so well that his doctors took chemotherapy and radiation off the medical menu. However, as the years passed and he progressed well, he became complacent. The lure of French pastries was difficult to resist.

Trochon describes the devastation in 2012 when symptoms returned and tests revealed a relapse. That led doctors to diagnose stage-four secondaries of the kidney cancer.

In medical terms, doctors define stage-four cancer as a spread “from where it started to at least one other body organ”. Therefore, it is known as “secondary” or “metastatic” cancer and the prognosis (survival outlook) becomes bleak. His oncology team recommended surgery to his lungs and thereafter, drug therapy, including antiangiogenic drugs.

Trochon looked beyond bleakness and went straight back into pilot mode. As a pilot, he writes, he is trained to stay focused and follow a decision-making procedure called FORDEC. It’s an anagram for Facts, Options, Risks, Decision, Execution and Check. “We are taught to apply this methodology to any procedure, checklist or situation that requires a decision.”

A flight plan for health

For that reason, he instinctively applied FORDEC to his own health and life.

He was reluctant to try anti-cancer drugs, such as chemotherapy and immunotherapy, and radiation, because of their well-documented toxicity – along with efficacy. As well, anti-angiogenesis drugs had not lived up to expectations. Instead, as Trochon told me in an interview for our first meeting in Paris in 2017, he had decided to “intelligently postpone” them all. (That decision was as momentous as it was controversial. It continues to ruffle orthodox feathers in cancer establishments worldwide.)

He agreed to more surgery, this time on his lungs. To help him prepare for the surgery, Longo advised a “plunge into an immediate 12-day fast” – water only. The idea appalled Trochon’s friends, including doctors. Reactions ranged from “mild concern to incredulity and even shock”. In other words, they believed that he risked starving to death.

However, many people don’t realise that the human body “is well-equipped to cope with long periods without food”, Trochon writes – as long as they have adequate supply of water.

Longo’s research builds on other studies showing that fasting can make chemotherapy and radiation more effective. Importantly, it does so with far fewer nasty side effects from the toxic treatments.

Thereafter, Trochon explained more at the groundbreaking Rethinking Cancer 2017 conference that he initiated and invited me to cover.

The conference took place at the Gustav Roussy Institut in September that same year. It drew global experts, all dedicated to improving the way doctors treat cancer.

I attended the conference and met Seyfried there. He memorably told me that doctors shouldn’t have to “slash, burn and poison patients just to treat their cancer”. In Flying Against the Odds, he writes that Trochon’s “avoidance of toxic radi­ation, chemotherapy and immunotherapy” in his case was wise. That’s because these “can contrib­ute to rapid tumor recurrence”.

Certainly, emerging scientific evidence shows that most, if not all, cancers suffer “a common defect”, Seyfried says It is one where “fermentation replaces oxygen-dependent respiration for growth”. The success of Trochon’s alternative approach to managing his metastatic tumors is “consistent with the new understand­ing that cancer is primarily a metabolic disease”. In other words, it can be managed “with non-toxic metabolic therapies”.

Trochon also believes strongly that his decision to “intelligently postpone” chemo and radiation was right in his case. Thus, Li calls him “not your typical cancer survivor”. Rather, he is a “cancer warrior”, an “extraordinary human” and an “amazing odds-beater”.

Ultimately, Flying Against The Odds shows how one man “flew directly into the headwinds of cancer”, writes Li. Trochon used “the latest scientific data on nutrition as his Operating Manual”. Above all, he found “new ways to land safely on his journey to healing”.

In the wake of Trochon’s health success, hundreds now reach out to him daily across the globe. Not only cancer patients, as Heather notes, but doctors as well. All have questions “to which today’s medicine doesn’t hold all the answers”.

Trochon has also learned many lessons on his journey. For example, that the best tools in any pilot’s armoury are “thinking quickly and keeping calm”. However, there’s always “an element of luck” and he prays daily that his luck holds out.

Together, he and his wife invite their readers to “fasten your seatbelts and take flight with us”.

So, I recommend anyone interested in health and healing to board that flight. The ticket is Flying Against The Odds.