Every now and then there comes a vegetarian cookbook that is a real gem, a healthy gift that goes on giving – even for meat-eaters. The newly published Banting 7 Day Meals Vegetarian (Quivertree) is it.

Neither of them is a doctor, scientist or nutritionist. Despite that – perhaps even because of that – theirs is a winning collaboration. Their book is reader-friendly, packed with helpful information, tips and recipes and is beautifully illustrated.

The Gourmand World Cookbook Awards 2020 named it the national winner in their Vegetarian category. That means automatic qualification for the final awards round in Paris next year to win ‘best in the world’.

My money is on Venter and her team to take the title.

I’m not just biased in favour of fellow-South African authors. As humans, we are all biased.  What matters most is how we manage our biases.  In this case, that requires favouring fact and scientific evidence, not fiction.

Facts and the evidence show that this book is an idea whose time has come. It has twin drivers propelling its likely success in the South African market. 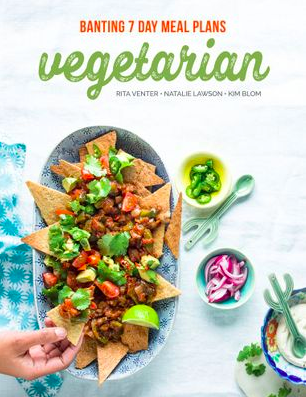 LCHF and keto have crept into mainstream globally to treat and prevent obesity, type 2 diabetes, heart disease and more. Both are also proving useful adjuncts to conventional treatment for type 1 diabetes. For proof, look to the personal and clinical experience of physicians with type 1 diabetes. Among them are UK GP Dr Ian Lake, Australian radiologist Dr Troy Stapleton and US orthopaedic surgeon (and vegan) Dr Carrie Diulus.

Secondly, the Banting 7 Day Meals Vegetarian feeds straight into another global movement – so-called ethical, “clean”, “plant-based” eating. Of the book’s more than 100 delicious vegetarian meals, all have been scrupulously checked by dietitians and chefs, and 40 are vegan. That’s a smart, strategic move.

As an aside, the vegan movement has appropriated the term “plant-based” for its own ends. The rationale, from what I can make out, is that plant-based is less “provocative”. It helpfully skirts distracting, divisive controversy over agendas other than health. In this case, it’s extremist animal-rights groups that are more concerned with animal welfare, not human or even planetary health. That’s beyond the scope and intention of this review.

The Banting 7 Day Meals Vegetarian shows that it is possible to follow LCHF and keto lifestyles while observing the choice to reduce or avoid animal foods altogether. It also aims to inspire those who do choose to eat meat but want more variety and taste in their plant-based foods.

The authors have, therefore, perfectly positioned their new book as a constant companion to its precursor, the BANTING 7 Day Meal Plans. Quivertree published it in 2019. It shot straight to the top best-seller list within the first week after publication and has stayed in the top 10 since.

Both books share the main strength and USP: Venter, a Cape Town entrepreneur and visionary founder of the BANTING 7 Day Meal Plans Facebook support group. She set it up in 2014 to give voice to a global community interested in low-carb, high-healthy-fat (LCHF) therapies and lifestyles. It has grown from humble beginnings to more than 2.3 million members at last count. They come from all socio-economic backgrounds. Many of them are vegetarians.

Thus, in the Banting 7 Day Meals Vegetarian, the authors are refreshingly inclusive, practical, cost-effective and realistic in their approach to eating  “real food” –that is nutrient-dense and as close to its natural, unprocessed, unadulterated state as possible. They are also nutrition myth-busters of note.

They destroy enduring myths and misinformation that low-carb and keto are dangerous, fads and unsustainable. The authors destroy myths that LCHF means no-carb or zero-carb, that it is high-protein or that it means stuffing your face with fat.

And, of course, they destroy the myth that LCHF is synonymous with eating meat – or having to eat any animal products at all.

Of the book’s more than 100 delicious vegetarian meals (scrupulously checked by dietitians and chefs), 40 are vegan. That’s a smart, strategic move.

As an aside, the vegan movement has appropriated the term “plant-based” for their own ends. The rationale, from what I can make out, is that plant-based is less “provocative”. It skirts distracting, divisive controversy over agendas other than health. That’s particularly the case with extremist animal-rights groups that are more concerned with animal welfare, not human or even planetary health. That’s beyond the scope and intention of this review.

Venter writes in the introduction that when she started the low-carb journey, she thought it was “impossible for vegetarians to follow the Banting lifestyle”. Her research proved that wrong.

Together with her co-authors, she has produced a comprehensive resource for vegetarians and vegans who are drawn to low-carb living. To that end, the book’s content menu is varied. It includes the basics of Banting (LCHF), essentials and tips to get vegetarian and vegan meals just right. There are meal plans, and foods lists grouped into three allowed categories: Always, Sometimes and Never. Recipes cover breakfast, main courses, side and smaller meals, desserts and soft drinks, all cost-effective meals and macronutrient (carb, protein and fat) profile

Staying ‘true’ to a vegetarian lifestyle

Ingredients include previously “off the table” – from classic LCHF – vegetables . Among these are kidney and black beans, chickpeas, lentils, green peas, corn on the cob and beetroot. Even peanuts (that are legumes, not nuts) enjoy a return as an “affordable way to include non-animal protein”.

In the foreword, paediatric dietitian Katherine Megaw says that the authors have achieved “something quite unique”: a “clever marrying of clean eating, environmental sustainability and health”.

The authors say they want to help readers take charge of their health, manage their weight, restore their energy and “stay true” to their vegetarian lifestyle.

They achieve all that in the Banting 7 Day Meals Vegetarian and more.