Are you or is anyone you love battling cancer? If so, you need Canadian nephrologist (kidney specialist) Dr Jason Fung on your side. Failing Fung’s physical presence, your next best weapon is his new book, The Cancer Code (Thorsons). He delivers on the subtitle’s promise: A Revolutionary New Understanding of a Medical Mystery.

His book is up there with two of my all-time bests on cancer. One is The Emperor Of All Maladies, A Biography of Cancer (Scribner 2011) by Dr Siddartha Mukherjee, a US physician, cancer researcher and an assistant professor of medicine at Columbia University. The other is Tripping Over The Truth: How the Metabolic Theory of Cancer Is Overturning One of Medicine’s Most Entrenched Paradigms (Chelsea Green 2017) by US science writer Travis Christofferson.

The Cancer Code is the logical extension of Fung’s earlier, landmark best-sellers: The Obesity Code, Unlocking The Secrets of Weight Loss (Greystone 2016) and The Diabetes Code: Prevent and Reverse Type 2 Diabetes Naturally (Greystone 2018). It is a riveting read, as realistic as it is well-researched, well-referenced and revolutionary. Among its strengths are its panoramic scope and future vision of treatment.

Fung crisscrosses the history of cancer from ancient times to the present. He identifies a fundamental research question and goes a long way to answering it: “What turns normal cells into cancer cells in some people in some situations but not others? In other words, what causes cancer?”

He focuses his sights on three historical paradigms on causes. The first paradigm is the theory of cancer as the result of “unregulated cell growth”. Fung eviscerates it with the consummate ease of a skilled surgeon wielding a scalpel.

It was a “huge medical advance”, he says, but could not explain how malignant cell growth begins. It led to invasive treatments with limited efficacy, such as chemotherapy, radiation and surgery. These remain the bedrock of conventional treatment protocols. They have helped to save lives but also take lives.

Chemotherapy’s severe side effects have led patients to describe the treatment as “worse than the disease”. It has had doctors scrambling to kill the cancer before the treatment kills the patient.

A drug’s ability to shrink a tumour is “immaterial to overall patient survival”, writes Fung. A drug that destroys half the tumour is “no better than surgery to remove half the cancer”. In other words, it is “almost completely useless”. Despite that, authorities have approved most new drugs based solely upon this “questionable marker of efficacy”.

Radiation led to “impressive remissions” but also burns, damage and no lasting cures. Fung shows that surgery is a similarly mixed bag.

Surgery aims to prevent life-threaten metastasis (spread), not because the cancer is too big. But surgeons go to “great lengths” and excise “huge swaths of normal tissue” in a misguided quest “to get it all”.

The second paradigm is the gene or “somatic mutation theory” of the 1980s and 1990s. According to this theory, genetic changes (mutations) to DNA within cells cause cancer. Fung shows that it opened up a much-needed new front in the “War on Cancer” that then-US president Richard Nixon declared in 1971.

It led to the discovery of a “disorienting number of genetic mutations” associated with each type of the disease. However, despite a massive, multimillion-dollar international collaboration overseeing the 2003 completion of the Human Genome Project, it did not lead to much progress. Thus, the paradigm proved ultimately to be “barely within the realm of possibility”.

The third, most recent, newly developed paradigm is the most exciting. It is ecological and the result of “the most powerful force in biology”: evolution. Fungs says that it’s not a new idea. Experts just need to “rediscover it”. It does not negate the importance of the genetic paradigm but adds to it. It recognises that cancer is not just a genetic but also an “ecological disease”.

The environment “plays a huge role in determining whether a cancer grows”, he says. It involves both the “seed and the soil” that cancer needs to take root, thrive and survive in a host body. Getting seed and soil right to improve survival odds lie at the heart of this book and combine to make it revolutionary.

Fung has probably ruffled many feathers in medical establishments in writing it. He has a well-developed habit of ruffling medical feathers. Many may see him as straying far from his “turf” as a kidney specialist. Yet he hasn’t strayed from his turf at all in this book. He has simply expanded it to embrace elements that are natural and integral to his turf. 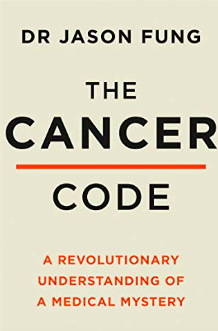 As a nephrologist, he regularly sees patients with “diabesity”, as doctors now call the common co-existence of obesity and type 2 diabetes. Kidney disease is one of the most common complications of type 2 diabetes, along with heart disease, blindness, limb amputation, cancer and declining cognitive function.

And Fung is not just a nephrologist. He is also an acknowledged world authority on diet, nutrition and intermittent fasting to treat and prevent diabesity.

In particular, he is a specialist in low-carbohydrate, high-healthy-fat (LCHF) and ketogenic (very LCHF) diets and therapies for diabesity.

Don’t think this makes his book mainly about diet, nutrition, LCHF and slagging off sugar to treat and prevent dread disease. Fung puts diet and nutrition into a proper perspective that is solidly evidence-based. He introduces the link between diabesity and cancer early on. He shows that cancer is increasingly an obesity-related disease with insulin resistance at its core. Obesity, for example, now accounts for between 20% to 30%  of the risk of common forms of the disease.

He makes it clear that there is no miracle food or diet to keep cancer at bay and presents diet and nutrition as adjuncts to – in addition to, not instead of – conventional treatment.

Click here to read: Cancer: Li cooks up revolutionary menu to beat it

He covers in-depth the “Warburg revival” and “Warburg Effect”. That’s based on the work of German physiologist and Nobel laureate Dr Otto Warburg in the 1920s. Fung builds on the work of leading cancer researchers globally who take the Warburg Effect to bold new heights. Among them is US biochemical geneticist, professor of biology at Boston College Dr Thomas Seyfreid.

Seyfreid is author of another groundbreaking book, Cancer as a Metabolic Disease (Wiley, 2012). He is withering about the financial burden modern medicine forces cancer patients to carry, often to bankruptcy point, and calls cancer “an industry”. He has memorably said: “We should not have to slash, burn and poison patients just to treat their (disease).”

He readily acknowledges modern medicine’s notable successes – the many battles, forays and skirmishes won following Nixon’s war on cancer.  He shows that despite decades and billions devoted to research, the experts have lost the war by going down the wrong roads and aiming at the wrong targets

Cancer death rates for children have dropped by about 50% since the 1970s, he writes. This proved “a major victory in a minor skirmish” because it is “the quintessential disease of aging”.

However, “(a) sober look at the available data indicates that progress in cancer research has lagged behind that of almost every other field of medicine”.

On the nutrition front, while it may sound trivial, Fung says there are ” four bits of knowledge” that have cost “hundreds of millions of dollars of research money and many decades of work”. These bits are that:

Fung investigates arguably the most important question in nutrition science involving the disease:  “What component of the diet is responsible for so much cancer?”

He looks at the role of insulin resistance – that is now epidemic in many countries – in contributing to the development of cancer. Fung also takes a long, hard look at the high cost of cancer drugs and treatment.

He sees special promise in immunotherapy developments and believes that immunotherapy represents “the future of cancer medicine”. Other researchers have described immunotherapy as transitioning from “a pipe dream to an established powerful cancer treatment modality”. Fung says it is proving to be effective and can make other, older treatments more effective.

However, it’s an understatement to say that affordability is not one of its advantages. “Given the exorbitant price tag of these treatments, many providers question the feasibility of using these advanced drugs,” Fung says.

He sees rising cancer rates in young adults as “a warning for future disease burden”.

“If you think it’s scary now, wait until this generation gets older,” he says. ” The obesity epidemic is affecting younger and younger patients and cancer is following closely behind.”

He shows that the youngest people are facing the steepest rises in rates. In contrast, most cancers not related to obesity are decreasing. That’s especially those related to viruses, smoking, and HIV (human immunodeficiency virus). The rate of pancreatic cancer – that has one of the worst prognoses – is increasing by 0.77% per year for those aged between 45 and 49. For those aged between 25 to 29, it is increasing six times faster.

Fung has written this book in his signature, reader-friendly style and punctuated it with acerbic wit and informed, provocative opinions. It is as accessible to the layperson as the scientist and medical doctor.

Hopefully, all oncologists worldwide will read it.