Life In The Fasting Lane (Harper Wave) is a brave, new book on one of the oldest, traditional healing modalities. The three authors – a doctor, a researcher and a layperson – promise the “absolute, unfiltered truth” about fasting.

That’s a big, brave promise. In this case, Dr Jason Fung, Eve Mayer and Megan Ramos are uniquely placed to deliver on it.

But their book is about more than just the “F” word – “Fasting”. The word still strikes fear into hearts and minds of MDs and dietitians who equate it, wrongly, with hunger, starvation, deprivation, even premature death.

The book’s subtitle speaks volumes: How to Make Intermittent Fasting a Lifestyle —and Reap the Benefits of Weight Loss and Better Health. 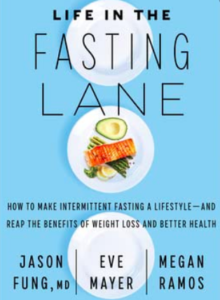 Intermittent fasting  (IF) has become a buzzword on weight-loss and health scenes in recent years. Like its extended parent, it is not new.  It’s an umbrella term for different forms of relatively short, time-restricted fasting. These typically vary between splitting the day or week into eating and fasting periods.

The focus is – or should be – on healthy, nutrient-dense foods. But IF is as much about when as which foods to eat.

And while IF benefits accrue in part from calorie-reduction, it’s not the generally debunked CICO (calories-in-calories-out) model of obesity in another guise.  I say “generally” debunked because many doctors and dietitians still believe that CICO is cast in scientific stone.

Not surprisingly, those same doctors and dietitians regularly denigrate IF. They dismiss it as yet another “fad diet” filled with danger for the unwary. That’s despite growing evidence for efficacy and safety of well-designed IF eating plans.

Canadian Fung is a Toronto-based physician and nephrologist (kidney specialist). He is also a pioneering medical mind. Over the past decade, he has added fasting, obesity, diabetology and endocrinology to his list of clinical and research expertise.

In the book, Fung explains why he changed his medical practice radically, 10 years ago.

As a nephrologist, he has always had many patients with obesity and diabetes. Along with kidney disease and an increased risk of cancer and heart disease, the most common diabetes complications are blindness, non-traumatic limb amputations and infections.

For years, he adhered religiously to orthodox protocols to help patients with kidney problems, obesity, diabetes, cancer, inflammation and more.

Putting nephrologists ‘out of a job’

He prescribed all the  “proper medications”, recommended the “right treatments and surgeries” and followed “correct procedures” for all these life-threatening conditions. When he reviewed his work over a decade, he found that he was often harming, not helping his patients. He was making them fatter, sicker and coming back for more drugs. He was treating symptoms, not root causes of disease.

He works to take patients off medications and to “escape the surgeon’s knife and avoid dialysis”.  Basically, Fung writes, his life’s mission has become to put nephrologists like him “out of a job”.

Not surprisingly, those sentiments make Fung the target of sustained attack from conventional MDs and dietitians on and off social media. Dietitians, in particular, seem to take it personally that he dares to stray onto their professional “turf” by talking to patients about diet and nutrition.

Fellow Canadian Ramos works closely with Fung and has done since her early teens. She is a clinical researcher and co-founder with Fung of Intensive Dietary Management,  (IDM). It’s an innovative program that provides digital and in-person solutions for weight loss, type 2 diabetes and metabolic syndrome.

Ramos is now disease-free and sustainably slender, thanks to meeting and working with Fung.

Mayer, a US-based speaker, author, and entrepreneur also speaks from personal experience.  After decades of struggling with obesity and at her heaviest, weighing 300 pounds, she discovered Fung and fasting. She changed her diet.

Mayer also (and at the risk of being accused of fat-shaming) completely transformed her looks and her life. She has, quite simply never looked back – or looked so brimful of health and vitality from the inside out.

Mayer speaks and consults worldwide on digital marketing, diversity and inclusion, wellness and fasting. She also created the Life in the Fasting Lane website. She has designed it as a safe space for people who “never give up on their health” to support each other.

While fasting is as old as the hills of ancient Greece, it may not come naturally to many in modern times. And for optimum, sustainable health and weight loss, IF needs a firm, informed and experienced, guiding hand.

That’s where Life In The Fasting Lane comes in.  At its core, says Mayer, the book is a “lifestyle guide”. It helps you prepare yourself, your kitchen and family for a whole new approach to optimum feasting and fasting, she says.  It’s a guide to finding your very own “fasting lane”.

Much of what the authors say about fasting and foods for optimum health (low in carbohydrate and high in healthy fats) is not new. And if you follow their work and their writings, you may feel you’ve read a lot of it before. It’s all worth repeating.

The book’s strength lies in a compelling symbiosis of their skills, knowledge, expertise, openness and, most of all, empathy. It’s also helpful to find what they all have to say in one book, making it a one-stop resource-shop.

Fung is a prolific author on the topic. His seminal work, The Obesity Code, Unlocking the Secrets of Weight Loss has a foreword by University of Cape Town emeritus professor Tim Noakes. Noakes calls it “perhaps the most important popular book yet published on this topic of obesity”.

If you harbour any doubt about why you should fast, Fung sums it up in Life In the Fasting Lane. “Fasting regulates your hormones,” he says. Hormone regulation is vital for optimum organ functioning, as he explains it. Whether extended or intermittent, fasting “resets your body’s internal controls”, he writes. It allows you to burn just the right amount of energy to “keep you alive”.

Fasting and your sex life

There are other vital reasons to make fasting a part of your life. From a purely medical standpoint, Fung says that excess body fat causes many diseases. It increases your risk of heart disease, stroke, type 2 diabetes and cancer. It may also raise your blood pressure, lead to or aggravate arthritis, disrupt sleep, cause back pain, liver disease and more.

But weight is not the whole story of the magic of fasting, as the authors show. People may be slim – as defined by body mass index (BMI) – but still metabolically unhealthy. Or overweight, again defined by BMI, but metabolically healthy. Fasting benefits many.

The authors cover in-depth all the major benefits of dietary change and IF, from sustainable weight loss to boosting heart health, reducing or reversing diabetes symptoms and boosting cognitive function.

The effects of IF on brain function are particularly exciting.  Doctors and dietitians in the thrall of conventional “wisdom: about fasting (long or short) claim it causes “brain fog”, not cognitive clarity.  Ramos explains why fasting clears rather than causes cognitive cobwebs.

Another major focus of her work is growing evidence for the link between food, fasting and improved mood.

The authors give tips on which foods to eat and avoid for optimum weight loss and health. They look at side-effects of fasting and which you need to worry about these. They also address key myths, misinformation and fears that doctors and dietitians still perpetuate about fasting.

An enduring myth is that fasting will slow down your metabolism and make you put on weight faster, thereafter. Spoiler alert: it won’t.

Another myth is that fasting will dampen your sex drive. The same spoiler alert applies.

Because fasting helps regulate all hormones, many women find that it increases their sex drive, says Ramos. That takes time. Positive sexual side effects usually occur within the first three months of consistent fasting, she says.

The authors are also not afraid to look at the benefits of fasting (and LCHF) for cancer patients. And they look at the vexed question of bariatric (stomach) surgery in weight loss. Mayer’s input is particularly relevant.

She had bariatric surgery not once but three times to treat her burgeoning girth. She saw upsides to going “under the knife”. Mayer was able to go off medications and reduce the side effects of PCOS. She was also able to become pregnant and later give birth to her daughter.

Mayer saw the serious downsides. Each time, after surgery, she gained some, if not all, of the weight she lost. And with the wisdom of hindsight, if she had known about fasting at the time, she says that she would have opted for it instead of invasive surgery.

Some doctors tout bariatric surgery as “the only scientifically proven method of long-term weight loss”. They even push it as first resort for type 2 diabetics, even if they are not morbidly obese.

Fung isn’t one of them.

Bariatric surgery is “rife with problems” and not “usually successful” long-term, he says. Medical who agree with him critical say that’s putting it mildly. Fung says his clinical experience of bariatric surgery techniques tells “much the same story”.

Bariatric surgery techniques have refined over the years, but Fung says we don’t need better surgical techniques. We need a complete overhaul of the “entire culture of weight loss”.

Conventional medicine is still steeped in the CICO (calories-in, calories-out) model of obesity. When it fails – “which it inevitably does”, Fung says – doctors resort to “drastic and draconian measures of mutilating a normal body for the purposes of weight loss”.

That is “an admission of defeat”, Fung says. Simply put, it is “not good medicine”.

This book is all about good medicine. It is presented in a reader-friendly accessible writing style with solid references.

Some reviewers have noted the frequent changes of “voices” from one author to the next, even in a chapter, and found it distracting. It does not detract from the message and wealth of information contained within the covers of this book.

It is a much-needed guide to a safe, effective, cheap, accessible and age-old method of transforming your health.