Hospitals are places of healing, dedicated to patients’ health, right? Wrong. They should be, of course, but they aren’t always.

Particularly when it comes to hospital food.Critics say that junk food is just another symptom of hospitals that practise the lucrative repeat business of sick-care, not health-care.

The latest medical expert to wade into hospital food is Dr Aseem Malhotra, an NHS (National Health Service) and Harley Street consultant cardiologist at ROC Private Clinic in the UK.

Malhotra took to Twitter and Facebook last week to blast an NHS hospital for the snack it served his father, Dr Kailash Chand, after major sinus surgery.

The offending snack?  An egg mayonnaise sandwich on white bread.

In a tweet, Malhotra called it “obscene, ultra-processed junk”.

He asked: “Why are patients still served such disgraceful meals when nutritious food is essential to good recovery?”

If we really want to fix healthcare, Malhotra tweeted, “we need to fix the food”.

Was he over-reacting? Not according to many of his colleagues, nutrition specialists and hospital patients and their families on and off social media. The UK Daily Mail quickly picked up the story.

UK cardiologist Dr Jagan John was among those who heartily endorsed Malhotra’s sentiments.

It’s time for a “national patient charter for food quality in hospitals,” John tweeted. Hospital patients are “in their most vulnerable state”, he said. Most of his patients “do not eat in hospital”. It is time to “encourage good quality food as it aids their recovery – and reduces bed days.” 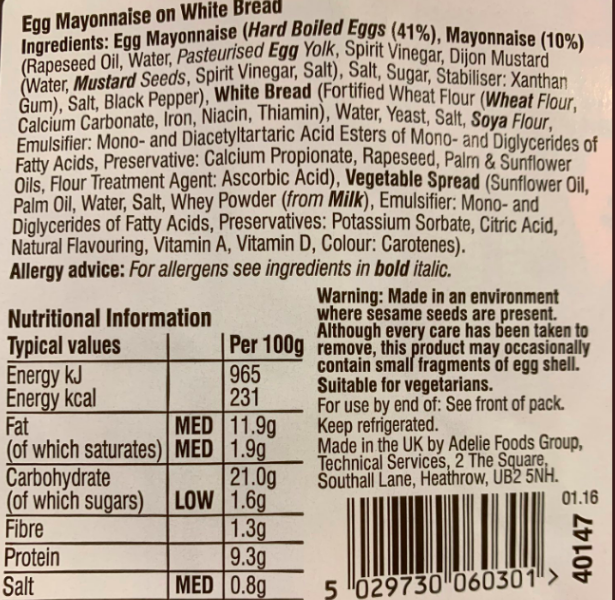 UK GP Alice Hodkinson was similarly on board. She saw good reason that the egg in the sandwich was not enough to avoid Malhotra’s ire.

Hodkinson tweeted her “shock” that anyone thought the snack could be good food. Other critics also saw a nutrition nightmare in label listing the snack bread’s ingredients (see right), a who’s who of the ultra-processed food industry’s major, artificial, chemical, junk-food additives and players.

“There’s money in it somewhere,” Hodkinson tweeted. “How about supporting ppl who produce nourishing food instead of plastic ‘bread’!”

She later tweeted that “some hospitals provide a fry-up after surgery. Much better nutrition than a plastic sandwich.”

Prof Tim Spector, a genetic epidemiologist at Kings College, London, tweeted agreement: “Need to tackle both hospitals and health care workers who should be leading the fight not suffering from it.”

Of course, it’s not only NHS hospitals or other UK hospitals that serve junk, ultra-processed food to patients. And bad hospital food is a global phenomenon, say experts. Worldwide, it’s as common in public as in private hospitals and clinics. 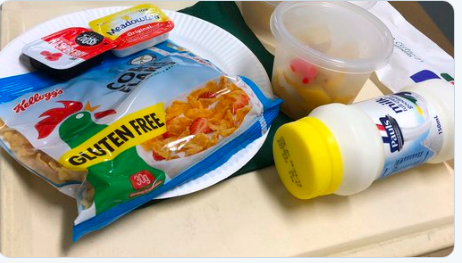 Australian David Fowler tweeted a picture of a breakfast (see left) that he was served during hospital stays over the past year.

“At least the milk was full-fat,” he tweeted.

It’s true that there has been some progress. UK vet Dr David Renney tweeted that he recently spent a week in Cheltenham General, an NHS hospital in Gloucestershire. He was “pleasantly surprised to be served proper, appetising meals, including red meat and good vegetables. So it does not have to be fake food in hospital.”

And lest anyone accuse Malhotra of a narrow focus, he is one of the drug industry’s most relentless bêtes noires on statins (cholesterol-lowering drugs).

But when it comes to nutrition, Malhotra told The Guardian last year that measures in place are not enough and much more is needed for hospital food to become good for patients.

The newspaper report was on an NHS audit showing that three-quarters of food bought in UK hospitals is unhealthy. The audit noted that by March 2017, Scottish hospitals had to ensure that at least half of the products they sold met “enhanced nutritional standards”. And in the same year, NHS England began to offer cash incentives to hospitals if 80% of their snacks had fewer than 250 calories.

However, the audit found obstacles in the way of hospitals taking steps to promote healthier eating, according to the report.  Medical staff, patients and visitors tended to “shun nutritious snacks in favour of crisps, sweets, cakes and other baked foods including pastries and muffins”.

Hospital food in his sights

Malhotra has had bad hospital food in his sights for many years. Way back in 2011, he wrote an opinion piece in The Guardian. It was scathing, starting with the headline: “I mend hearts. Then I see my patients served junk food by our hospitals”.

He gave credit where credit was due and acknowledged some “beacons of good practice”. One was the Royal Brompton NHS trust (where he worked) in London. A team led by chief caterer Mike Duckett has worked to utilise budgets to provide meals using fresh, seasonal produce, Malhotra wrote.

That raised the question – and still does: Why don’t all NHS and other hospitals serve nutritious food?

Malhotra has initiated and successfully led campaigns in the UK against excess sugar consumption. He has motivated leading academics and politicians to make sugar reduction a health priority in the UK by publishing commentaries in the BMJ and mainstream media. He is a founding member of the Public Health Collaboration.

In 2018, he was behind a world-first: a 70-day challenge by Tameside Hospital in Greater Manchester to the 250,000 people it serves to go sugar-free.

In 2013, Malhotra attended the British Medical Association (BMA)  annual conference in Edinburgh and proposed a motion recommending all hospitals to ban all junk food and drinks and to sell only healthy products. 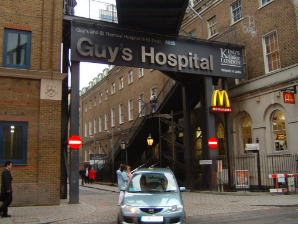 In a report in The Guardian, he argued that it was “obscene” for places that promote health to have fast-food outlets on site. One of the most egregious examples Malhotra gives in his talks internationally is the prestigious Guys Hospital, London, once flagrantly advertising McDonalds on site.

The 500 conference delegates overwhelmingly endorsed the motion calling on hospitals to ban all junk food and sugary drinks. They also called on the BMA to lobby the UK’s Department of Health and NHS Confederation that represents hospitals “to ensure that all NHS premises should clearly display the health risks involved with junk food and drinks, especially in kitchen areas and on vending machines”.

Malhotra, a cardiologist at London’s Royal Free hospital at the time, told delegates: “It is appalling to observe on ward rounds patients, some of whom are not fully mobile, gorging on crisps, confectionery and sugary drinks.

“These are the “very food items that may have contributed to their admissions in the first place”.

He called it “obscene” that many hospitals have high street fast-food franchises on site. They also have corridors “littered with vending machines selling junk food”.

Confederation director of policy Dr Johnny Marshall said that hospitals made “little money” from such franchises.

“There isn’t a hospital trust in the country that would prioritise the relatively small amount of income they get from these sources above the overall health of their local community,” Marshall said in The Guardian.

Patients, their families and hospital staff valued commercial outlets in hospitals, he said. Most sold healthy products as well as sweet treats. It was “unfair and unrealistic to deny patients the right to buy sweets to cheer themselves up”.

Where are hospital dietitians in this debate? They can probably count themselves lucky to get a free pass from Malhotra’s wrath this time around.  But many experts say that hospital dietitians can and should be proactive to ensure that patients always receive nutritious food.

Malhotra is often critical of dietitians and the role they play. He is also a founder member of the UK-based Public Health Collaboration (PHC). It’s a non-profit organisation with a major focus on the epidemics of obesity and type 2 diabetes. The PHC also works to change official low-fat, high-carbohydrate dietary guidelines and dietetic practice that lack an evidence base.

“We need to be much more radical given where we are with the obesity epidemic. Hospitals should be setting an example,” Malhotra said

“We need to ban the sale of junk food completely in hospitals. If people want to buy this stuff, that’s fine, they can go out and get it but hospitals should not be selling it.

“They should be selling decent, healthy food.”