Will 2020 be the year that “real food” – low in refined carbohydrate,  high in healthy fats – finally goes medical mainstream to treat and prevent a wide range of life-threatening diseases? Will dietitians be the main movers and shakers who achieve that magic by dispensing cutting-edge, 21st Century, evidence-based dietary advice?

Is 2020 the year they become healers who use food as medicine?  Or will many of them just carry on dishing up unscientific, industry-led dietary dogma that researchers say makes them dinosaurs – and a public-health hazard?

Another is the planned launch in April of Diabetes India’s Low Carb Nutrition Diploma course through the e-learning model. The diploma has official recognition. Those completing it will be able to practise legally as low-carb nutritionists in India.

The Nutrition Network launched its course in October 2019 with a focus on LCHF training for health promotion and medical nutrition therapy. The training is worth 25 CPD (Continuing Professional Development) points and has accreditation from the internationally respected CPD Standards Office.

The Network is powered by the Noakes Foundation. University of Cape Town (UCT) medical doctor and emeritus professor Tim Noakes, the pioneer of LCHF in South Africa, set up the family foundation in 2012 with a specific aim: To conduct independent scientific research into optimum nutrition for health and to treat and prevent life-threatening disease. 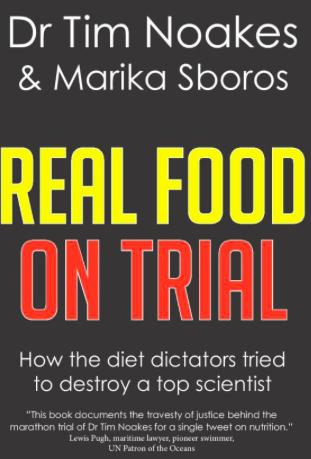 Noakes and I are co-authors of Real Food On Trial, How The Diet Dictators Tried To Destroy a Distinguished Scientist (Columbus). In it, we document why so many dietitians – and doctors – are still pathologically resistant to LCHF. And what lain in wait for pioneering medical doctors and scientists who have dared to challenge orthodox dogma on diet and promote LCHF.

The Nutrition Network has already spent more than a year training thousands of medical doctors and other health professionals globally to integrate LCHF (aka Banting in South Africa) and ketogenic (very LCHF) therapies into their practices.

The Foundation launched the new LCHF course for dietitians and CNS in October 2019. It’s an innovative, dynamic offering that doesn’t just put the fun back into nutrition training. It also puts back the solid, scientific evidence base required for effective nutrition therapy.

An international team of dietitians, CNS and medical doctors has contributed to and scientifically vetted the course.  Content covers three key areas:

A main driver of the course is to provide and empower dietitians and CNS with the tools to stem the pandemics of so-called non-communicable diseases (NCDs), worldwide, says Nutrition Network MD Jayne Bullen.

Doctors often refer to NCDs as lifestyle diseases – chronic health conditions caused by bad lifestyle habits, a major one of which is diet. Chief among lifestyle diseases are obesity, type 2 diabetes and heart disease as well as some cancers and dementia.

Dementia diseases are becoming so common that doctors often refer to it as type 3 diabetes.

Another major driver of the course is to fill decades-long, glaring gaps in university courses for dietitians with up-to-date, evidence-based information and training, says Bullen.

Researchers have identified a long and unedifying list of reasons for those gaps. Top of that list is biased teaching that for decades has promoted official, influential but largely unscientific low-fat, high-carbohydrate dietary guidelines.

That teaching, say critics, has produced generations of dietitians who have contributed to spiralling rates of preventable diseases. They have done so, whether by default or design, by dishing up industry-led, unscientific dietary advice and dogma to the public.

The US launched those guidelines in 1977 and most of the English-speaking countries followed suit.  Compelling research by UK public health researcher, Dr Zoë Harcombe shows that the guidelines had no solid science backing them up when the US first launched them. That status quo remains.

The guidelines also spawned decades of “fat phobia”, as the demonisation of saturated fat is known. That’s a legacy, say the experts, of the unproven but enduring diet-heart hypothesis that saturated fat causes heart disease.

(It doesn’t, but that’s for another time. For more information, read The Big Fat Surprise, by US science journalist Nina Teicholz. In it, Teicholz documents how and why low-fat diets can be lethal – and killers.)

The effects of the guidelines on public health have been nothing short of catastrophic, say researchers. For proof, you only have to look at spiralling rates of NCDs globally, despite decades of conventional low-fat, high-carb dietary advice.

Another item on the list is drug industry funding of medical schools and health faculties that house nutrition departments. Umbilically tied to that is research revealing the pernicious influence of food and soft-drink industries on dietary guidelines and advice. The sugar industry and Coca Cola are egregious examples.

Universities haven’t helped, say researchers, by turning resolutely blind eyes to the compromising effects of industry funding. And overt conflicts of interests in lecturers and professors who have close ties with drug, food and soft-drink companies.

Yet another aggravating item on the list is lecturers and professors who have never practised as dietitians and, therefore, have no clinical experience to offer.

All that is part of a global phenomenon and in South Africa, it is rife in the country’s top universities. UCT, the University of Stellenbosch and North-West University have been particular hothouses for conflicted nutrition academics.

It’s why more dietitians now openly acknowledge what they would previously only admit to privately. They started out at university knowing that at least half of what they would learn would be wrong.

They just didn’t know which half – until now.

The Nutrition Network’s LCHF course aims to redress that imbalance.

It does not present LCHF as a one-size-fits-all or a panacea for all ills. But Nutrition Network RD Tamzyn Murphy says that dietitians have “a duty” to know about and offer it as an option to patients.

Dr Caryn Zinn, a UCT graduate and New Zealand-based RD and academic has gone further. Zinn says it is “unethical” for dietitians who know about  LCHF not to offer it as an option to patients.

Murphy says that dietitians are the only healthcare professionals whose entire university degree is “dedicated to equipping them to prescribe personalised nutrition and dietary interventions to promote health and prevent and treat specific health conditions”.

That’s particularly the case, she says, with the many people who have insulin-resistant conditions that include obesity, type 2 diabetes and cardiovascular disease.

Yet dietitians still do not receive specialised training in LCHF nutrition at university.

Medical Nutritional Therapy (MNT) is dietitian’s bespoke dietary assessment and prescription is, Murphy says. Dietitians are qualified and equipped to use MNT in the treatment of a variety of diseases, from chronic kidney disease to liver failure, cardiovascular disease (heart attack and stroke) diabetes, obesity and cancer.

They do so in a variety of populations from paediatric to palliative.

“Unfathomably, apart from the application of ketogenic diets (the strictest form of LCHF) for paediatric refractory epilepsy, dietitians’ extensive nutritional training does not include research-based application of LCHF diets.”

Estimates are that around 30-60% of the population may be insulin resistant, she says. This number is rising alongside obesity prevalence in many countries.

This implies that LCHF could improve the health and reduce the risk of disease in a big portion, if not the majority, of people, Murphy says. This alone is “sufficient reason” for training all dietitians in LCHF nutrition.

There is also mounting evidence that an LCHF diet may be as good as, if not better than other dietary interventions for improving body weight control, heart disease risk and endurance performance, she says. In its strictest ketogenic form, LCHF may also be helpful as adjunctive treatment in cancer and Alzheimer’s disease.

That makes it essential that dietitians become knowledgeable about LCHF as an MNT option for all of these, Murphy says.

More dietitians are realising how effective LCHF diets can be for a variety of clinical applications, she says. They see the need for professional guidance for patients pursuing this dietary intervention.

“Previously, interested dietitians had to educate themselves on this intervention,” Murphy says.

This has made their knowledge ad hoc and dependent on the time they had out of clinical practice to investigate. It’s one reason that the Nutrition Network LCHF course has been so well-received by participants so far.

Canadian RD Kathy Ladd has found the course “valuable”.  Ladd recently left hospital practice as a dietitian. She currently works in a medical practice in Manitoba with physicians who offer LCHF and fasting as options for patients.

She says that about 50% of her university education was “useless and a waste of time and money”. There was no clinical application of courses or any course on behaviour modification or food addiction.  All the professors had never practised as dietitians and, thus, had no clinical experience.

What she did learn, therefore, meant that her career, and indeed her whole life, centred around “fat-phobia” and low-fat, high-carb diets, she says.

Four years ago, she became aware of evidence showing that food companies and political motives were behind official dietary guidelines. She was shocked to realise that the guidelines – and thus, her advice to patients –  had been “wrong all along”.

She signed up for the Nutrition Network course because she was looking for “reputable training”.

“I wanted a course that provided all the necessary information, evidence and references to back up clinical use of LCHF and fasting therapies,” she says.

South African RD Tracey Williams says that the course has restored her passion for her profession.

Williams is a UCT graduate who says she emerged from university fat-phobic and with “big gaps” in her knowledge. Training was all very much in line with conventional nutrition and so-called “prudent” dietary guidelines, Williams says.

“Nothing slightly unconventional was ever entertained.”

She took a break from her profession for eight years because she felt “ineffective”. A colleague who had been working with LCHF kept trying to “convert” her, she says. Williams succumbed and eventually tried it (under her colleague’s guidance).

She found it effective and began to rediscover her excitement for the field of nutrition.

Williams is still working through the course. She says it has all the information she needs and credible studies backing it up. It is making her feel more confident to pass on this knowledge to patients and apply the principles in her practice.

“I finally feel that we (dietitians) can advise patients in a way that will make significant changes to their health,” she says.

“We have needed someone like Tim Noakes to come and shake things up a bit for a long time.”

Of course, while scientific support for LCHF is vital, it’s not the only reason that dietitians should become proficient in LCHF MNT. It’s also about choice and options.

After all, patients have the right to choose their own course of treatment, including dietary intervention, says Murphy.

LCHF, in its various forms, including Paleo, Banting and ketogenic diets, is rising in popularity worldwide, she says.

Globally, people are equipping themselves with information. They are seeking out  health professionals to guide them in applying their carbohydrate-restricted diet-of-choice, to troubleshoot problems, assess risk and enhance efficacy. But they often lack support.

“Lack of support at best can lead to ineffective dietary interventions; at worst, adverse effects, disenchantment with the medical fraternity, or even the unnecessary proliferation or progression of a disease,” she says.

“It is a dietitian’s responsibility to know how to guide patients and clients to the best form of LCHF for them and then tweak it for success.

“Dietitians must also be able to advise when to proceed with caution or contraindicate LCHF in particular patients or situations.”