Is it most correct to call Dr Antti Heikkilä Finland’s Tim Noakes, Gary Fettke? What about Shawn Baker, Annika Dahlqvist or Èvelyne Bourdua-Roy?

You’d be most correct to say he’s a mix of all five medical doctors from around the globe. Or even a precursor of most of them.

He has much in common with Noakes in South Africa, Fettke in Australia, Baker in the US, Dahlqvist in Sweden and Bourdua-Roy in Canada. Like them all, Heikkilä has incurred establishment wrath. And for the same “crime”:  for daring to challenge medical and dietary orthodoxy for obesity, type 2 diabetes, heart disease and other life-threatening illnesses.

But while establishment attacks on all the others have waned – publicly, at least – they continue against Heikkilä. So much so, that he now spends more time practising in Hamburg rather than his home town of Helsinki.

Like the others, Heikkilä changed his medical practice after reading compelling research on benefits of low-carb, high-healthy-fat (LCHF) diets to treat and prevent chronic diseases.

Heikkilä also began using LCHF and ketogenic (very low-carb, very high-fat) diets in his practice more than 20 years ago. That’s earlier than most of the others.

And like them all, once he started, he just couldn’t stop. After all, Heikkilä says, it’s difficult to unsee robust scientific evidence that is staring you right in the eyes. More so, when you see it dramatically improving obese, diabetic patients’ lives.

And as with all the others, many of  Heikkilä’s patients have been able to lose vast amounts of weight quickly and safely. They have also been able to reverse all their diabetes symptoms. Most are also able to manage their conditions without drugs or with significantly reduced doses.

Heikkilä has much in common with Fettke and Baker. Like them, he is an orthopaedic surgeon who balked at having to amputate growing numbers of obese, diabetic patients’ limbs. And like them, he infuriated his hospital management for cancelling surgeries after patients’ symptoms improved dramatically.

Managements of privately-run hospital tend to look unkindly on surgeons who reduce profit margins by cancelling operations for patients whose symptoms improved by less drastic means.

Surgeons straying from their ‘lanes’

They also don’t seem to like surgeons straying out of their “lanes”, for example, by talking to obese, diabetic patients about diet.  Unless, that is, they dispense the same advice as orthodox hospital dietitians dispense, despite no evidence-base.

Heikkilä can probably count himself lucky that his medical regulatory body has stayed in the background.

In the case of Noakes, Fettke, Baker, Dahlqvist and Bourdua-Roy, their regulatory bodies investigated them after complaints from dietitians. In all cases, the regulators backed off.

Click here to read: Noakes exposed: Real beef dietitians have with him!

Compare that with the intransigence of the Health Professions Council of South Africa (HPCSA) in its dealings with Noakes. Despite two of the HPCSA’s own committees comprehensively vindicating Noakes, the last case on appeal in 2018, it has yet to apologise. Or even to announce that ruling on its website.

Sweden’s National Board of Health and Welfare (Socialstyrelsen) looks more efficient by comparison. It took two years to clear Dahlqvist in 2008.

Compared to all three, Quebec’s College of Physicians in Canada looks like it’s on steroids. It took fewer than eight months to clear Bourdua-Roy of any impropriety. And to give a nod to LCHF as part of obesity and diabetes treatment.

Baker headed the US medical regulators off at the pass. He voluntarily surrendered his licence in late 2017 after increasing attack from his hospital administration and competitors surgeons in the area. By June 2019, however, his medical regulatory body invited him to reapply for his licence – and quickly reinstated him.

Finland’s medical regulatory body, probably wisely, has chosen not even to try to prosecute Heikkilä for promoting LCHF and keto diets. However, it has also ignored relentless defamatory attacks on him by different groups.

Among those are dietitians, food and drug industries, the Finnish Diabetes Association (FDA) and the media.

It’s probably no coincidence that attacks against Heikkilä began after publication of his first book on LCHF, Nutrition Therapy for Diabetes in 2008. He has revised and updated it under the title, Diabetes Remission Through Nutrition.

The Finnish Medical Journal also published a negative review. And when Heikkilä wrote in defense of the book, the journal chose not to publish it.  At the same time, he says, the FDA issued circulars to bookstores saying that “instructions for the extreme restriction of carbohydrates and insulin (can be) fatal”. 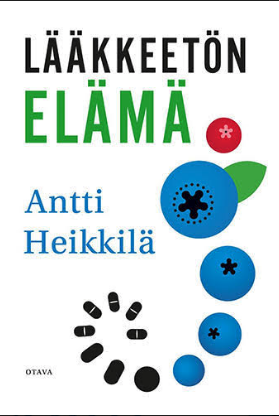 It is also probably not coincidental that attacks have resurged in the wake of his latest book, A Life Without Drugs, (Lääkkeettön Elämä). The state broadcasting company Yle and the private Helsingin Sanomat once again published negative “reviews”. Bookstores don’t want to stock it.

In an email to Hellevig, Häme-Sahinoja expresses concern at “someone claiming that type 1 diabetes can be treated without insulin”. Such a claim can be “life-threatening”, she writes. The FDA has a duty to “rectify critically incorrect information that can be life-threatening to a diabetic”.

Yet Heikkilä’s books are very clearly aimed at treatment for type 2 diabetics. And he does not advise type 1 diabetic patients to go without insulin.

“That would be a dangerous, unscientific and crazy thing to do,” he says.

Although Heikkilä knew establishment knives were once again out for him, what happened next surprised even him. The Eira Hospital, where Heikkilä has practised  for more than 35 years, suddenly forced him out.

On November 29 2018, Heikkilä received an email from hospital CEO Nella Ginman-Tjeder. In it, she advised him of the usual annual increased rental and he replied to accept. He says this was standard practice for all the time he has been a tenant.

A week later, he received a call from Eira Hospital chief physician Dr Mikael Railo. Railo said that the board had “unanimously dismissed” Heikkilä because of media coverage.

Via email, Eira Hospital CEO Nella Ginman-Tjeder claimed that the hospital had simply terminated his rental agreement “according to the mutual right to terminate”. She said that this was “standard procedure”.

What ‘crime’ did Heikkilä commit?

Ginman-Tjeder also claimed that the termination “was in no way related to Dr Heikkilä promoting ketogenic diets”. However, she refused to say whether the hospital supported LCHF and ketogenic diets for obesity and diabetes. She also declined to confirm or deny the content of Railo’s call to Heikkilä.

Of course, Hellevig can seem biased, as a friend of Heikkilä’s. However, as a lawyer, he knows about the need to have all his factual ducks in a row when building a case.

In a hard-hitting blog, Hellevig says Heikkilä has “fallen prey (to) an unprecedented persecution by Finland’s globalist elite”. His “crime”: to publish a book about “the importance of healthy lifestyles.”
The establishment “went berserk”, Hellevig writes, after publication of A Life Without Drugs.

He doesn’t hold back about those he thinks are behind that persecution. He fingers the media, in particular, Yle and Helsingin Sanomat. Hellevig calls the latter the country’s “leading totalitarian propaganda outlets”, popularly known as “the Pravda of Finland”. A more suitable name, he writes, would be the “Völkischer Beobachter” (National Observer). That’s a reference to the National Socialist German Workers’ Party newspaper in the 1920s).

Hyperbole to talk of ‘persecution’?

But is it hyperbole to call the attacks on Heikkilä “totalitarian persecution”. Hellevig doesn’t believe so.

The attacks recall the persecution of Galileo and those who dared to go against the doctrines of the Catholic Church and “every other authoritarian power structure”, he says.

The Galileo comparison cropped up in Noakes’s trial – that the public quickly dubbed “an inquisition” “Nutrition Trial of the 21st Century”. And research by Fettke and wife Belinda, during AHPRA’s case against him, has revealed insidious religious indoctrination at the heart of conventional dietary advice worldwide. In particular, the Fettkes exposed the contribution of the Seventh Day Adventist Church’s practice of so-called “medical evangelism“. They also exposed a sinister global nexus between the church and food and drug industries.

Hellevig says that Heikkilä’s case is the result of all that is wrong in Finnish society.

“Attacks on him are all about money, power, beliefs and hurt feelings,” he says.

People in positions of power and influence are likely to “remain in denial” that they have been wrong about the “core of (their) supposed knowledge, even on their death beds, he says.

Hellevig says that this phenomenon is not restricted to Finland’s medical or scientific fraternities. It is “the same all over the Western world”.

There are “credible reports” of medical doctors being ostracized for their research, fired from their positions and being banned from publishing – or in a worst-case scenario, being killed – because they have gone against dogma, he says.

Hellevig says that Heikkilä is being persecuted despite the evidence and simply for “presenting an alternative view”. And that is dangerous for the public as well as for doctors and scientists.