Did interests opposed to low-carb therapies sabotage the group? Did Facebook assist that agenda without checking for conflicts of interest?

The group’s creator, Cape Town businesswoman Rita Venter has “no idea whatsoever” why Facebook deleted the group. “There was no warning, nothing that would have made us believe that the group was in danger of being taken down.”

Facebook claims that a “user” hacked and deleted the group. That made the deletion “voluntary” from within, it says. If so, what does that mean for the personal data of the group’s more than 1,6million users?

There are 1.1 million South African “Banters” – as supporters of low-carb, high-healthy-fat (LCHF) therapies are known in that country. The rest are scattered across the planet. Could the hack have compromised their data? Could the user have hacked Facebook as well?

Facebook has gone to great lengths to suggest otherwise. It reinstated the group on May 17 but not before its sudden removal on May 14 went viral. That precipitated a tsunami of protest from users and supporters around the world on Facebook and Twitter.

Facebook’s communications head for sub-Saharan Africa, Kezia Anim-Addo said via email that it did not delete the group. That’s despite notification to the group’s admins logged in at the time that it had done just that.

Facebook hasn’t explained the use of the word, “still”. It suggests previous and ongoing breaches of community standards. Facebook’s own evidence suggests there were no breaches.

Anim-Addo said that Facebook investigations “seem to show” that a user hacked the group. The company had now “disabled” the user, she said.

It “does appear” that the group was deleted “as a result of an admin being disabled”. This was the result of “violations of (Facebook’s) community standards outside of this group” that took place on May 14, she said.

Click here to read: Did disgruntled dietitians set Noakes up?

Due to confidentiality and data protection, Facebook “cannot reveal who or what the violations were”. Given the link that (Facebook) has “with an admin being disabled, in addition to the group being hacked, this does appear to be the likely case”.

It is “worth noting”, Anim-Addo said, that only admins can remove groups. And that “all admins will receive email notifications around this”.

Source of the ‘bad news’? 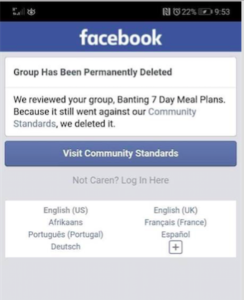 However, Facebook was “unable to locate” any email messages to admins about removal for violating community standards. Facebook has also taken “further security action”  on other admin accounts, Anim-Addo said.  “…It appears these may have also been comprised.”

Facebook brushed aside a claim from a reliable internal source. The source told a group admin that the news was “not good”. Facebook deleted it after receiving “thousands of reports” over a short period, the source said. These reports alleged that the group was dispensing medical advice.

Anim-Addo was “not sure where the information came from about violations and Facebook removing as a result”. But this is “not the case”.

Venter says that the group does not dispense and never has dispensed medical advice.

There are a doctor and nurse among its 28 fulltime administrators (admins). “To say they were devastated when Facebook took the group down is an understatement,” Venter said.

The group’s comprehensive rules include keeping a close watch on Facebook’s community standards to ensure compliance.

Admins also make regular checks on Group Health. That’s a section where Facebook advises if the group is violating rules and community standards. 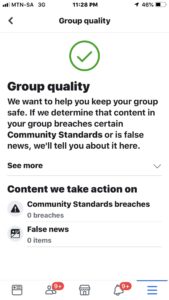 “We check this daily. We have never received any indication from Facebook that our group is doing anything wrong.”

After Facebook deleted the group, Venter tried calling. As Facebook does not offer voice assistance, the company advised Venter to appeal via its online help section.

She filled in the requisite forms and Venter received further notification from Facebook. It said, among others, that Facebook had the right to delete any person or group from Facebook “at any time without warning”. The notification also advised Venter to read “very thoroughly” the link to conditions around violation of community standards.

Venter appealed further online. Facebook informed her that its investigators would “analyze the request” and get back to her. Facebook reinstated the group on May 17.

Venter set up the group up in 2014 as a voice for a community interested in low-carb, high-healthy-fat (LCHF) therapies. She has never monetised the group and has no intention of doing so. ” We have admins from all around the world who give up their time out of the sheer love of the LCHF lifestyle and helping others. Nobody is paid.”

The group has advertisers. Venter asks only that they “pay” for advertising by doing regular giveaways to the group members.

At the time she set it up, there were many Banting (LCHF) groups on Facebook. One, in particular, was selling meal plans.

“That got my back up so badly that I started a group doing free meal plans and helping everyone for free. This ethos has never changed.”

Click here to read: Meat: Giving it up won’t save the planet – or you

Venter realised that many indigent South Africans needed to follow a diet of real food. Therefore, she focused on making the LCHF lifestyle affordable for all. That meant finding alternatives for expensive foods and oils. These were simply outside the budget of people who live on R5000 a month – or less, she said.

“We started suggesting traditional food, such as chicken feet and heads, tripe and organ meat. We told people that the ideal is to eat grass-fed beef and organic foods. And we said that it ok to eat what they could afford as long as they cut out sugar and junk food.”

She gave up her job in 2018 to concentrate on helping people in the group fulltime. “It’s deeply moving to see that so many appreciate what I do.”

The group’s successes have been “nothing short of awe-inspiring”, Venter said.

“People have improved their health and in many cases come off medication altogether after consulting their health professionals.”

The group has grown quickly as word spread and users posted success stories. The focus remains on diet instead of drugs to treat life-threatening illness, such as obesity, type-2 diabetes and heart disease.

That focus has attracted critics among vested interests in food and drug companies opposed to LCHF. Critics also include doctors and dietitians who support orthodox treatment protocols for these diseases.

Venter paid tribute to the “support and love of the LCHF community” globally.

“The way everyone pulled together to express their outrage (at Facebook’s deletion) and support for the group is humbling,” she said. “The world community came together and spoke with one voice.”

Among those was Crossfit founder Greg Glassman. Glassman spokesperson Karen Thomson said that he had contacted US senators and attorneys to get explanations. Glassman was also ” considering a class action suit against Facebook on behalf of the group members”.

Venter believes that the group was most likely the victim of a cyber-attack.

“I can’t be sure because Facebook hasn’t explained or apologised for taking us down or reinstating us.”