It’s official. US President Donald Trump is obese and shorter than he claims to be.

Trump physician Dr Sean Conley has released his patient’s latest physical exam results. Despite (or perhaps because of) the results, Conley declared Trump to be in rude, good health. He also predicted that Trump’s “good” health would continue throughout his presidency. And forever after.

Conley is the first psychic physician to serve the White House incumbent. His medical crystal ball, however, is faulty. Other US MDs are not so sanguine about Trump’s health.

It turns out that Trump is more obese than Conley claims he is. He also has more serious health problems in body and mind than Conley’s crystal ball reveals.

Conley claims that at a weight of 243 pounds (110kgs) and height of 6 feet 3 inches (190.5cms), Trump’s BMI (body mass index) is 30.4. Trump regularly claims the same height. BMI is a standard calculation of body weight in relation to height. Doctors use it to diagnose if someone is overweight or obese. Anything above 30 is considered obese. 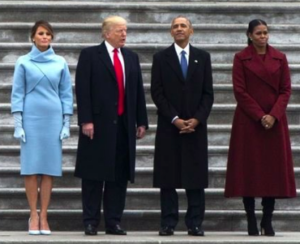 But Trump is not quite as tall as he and Conley claim he is. He is no taller than 6 foot 1 inch. That’s obvious from photographs of Trump next to other leaders, including ormer US President Barack Obama who is just over 6 foot 1 inch. And Canadian President Justin Trudeau who really is 6 foot 3 inches.

The height claim  may just be a symptom of a mental problem from which Trump suffers: a chronic inability to tell the truth.  In other words, pathological lying

Of course, it’s not the worst lie to say you are taller than you really are. It’s in the nature of those who suffer from narcissistic personality disorder to be vain and to lie.

However, it’s not rocket psychological science to know that if you lie about small things, you’re more likely to lie about big things. You’re also likely to spin tall tales and not just about your height.

Trump’s former physician Dr Ronny Jackson reported that Trump is taking the common male hair-loss drug Propecia (finasteride). Among side effects of finasteride are impotence and loss of sex drive.

On a more mundane level, the lie about height means that Trump’s BMI is likely higher than 30.4. But BMI, as experts will tell you, is not a good predictor of overall health. More important is percentage of body fat and evidence of other symptoms of ill-health. That proves the possibility of being “skinny-fat” – to be thin and have a body-fat percentage that puts health at risk.

All of which Conley appears oblivious of or conveniently just ignores.

Some MDs (who wish to remain anonymous) have told me that just by looking at Trump, they can see that he has a serious metabolic condition. It is insulin resistance (IR), a condition that has become epidemic worldwide, including in the US.

Among the common symptoms of IR, are not just Trump’s puffy, bloated face and skin. (The fake tan doesn’t hide the pallid, pasty condition of his skin.) Another symptom is the excess adipose tissue or “tyre” round his middle. Adipose tissue is the medical profession’s euphemism for excess body fat.

IR also significantly increases the risk of heart disease. The tyre around Trump’s middle is from what doctors call “visceral” fat in the abdominal area. Visceral fat is dangerous not just because it migrates to surrounding organs that include heart, liver and kidneys. It is also a sign of bodily inflammation that can affect cognitive function.

IR also raises the risk of cancer and dementia diseases, such as Alzheimer’s. Dementia is now becoming so prevalent that doctors are referring to it as type 3 diabetes. And that’s just not good news for longevity in body and mind.

So where does that leave Trump, with his supposed “clean” bill of health? It’s muddy because obesity can be a complex issue. Or at least, orthodox medical doctors and dietitians like to say it’s complex.

They also like to say that obesity is the result of gluttony and sloth. In other words, all you need to do to lose weight is eat less and more.

Growing numbers of MDs and dietitians don’t buy into that conventional “wisdom”. They say that’s it’s a myth that weak research created. Processed food, drink and drug industries also perpetuate and feed off it because they make billions from it.

Research also shows that the most common cause of IR is a high-carbohydrate, low-fat diet. In other words, the SAD (standard American diet). Trump’s penchant for high-sugar, junk-food binges, late-night cheeseburger meals is well-known.  And pictures of him drinking sugar-free soft-drinks and snacking on potato crisps suggest that his diet is indeed SAD.

US physician Dr William Wilson has a long-standing interest in obesity and doesn’t mind speaking on the record about Trump’s health. He says many “experts” have got it all wrong. Wilson has unpacked the obesity issue and Trump’s health in an entertaining blog. Here’s some of what he has said. (Scroll down to read it in full.)

The US National Institutes of Health (NIH) decided to use BMI to define obesity 20 years ago, according to Wilson. He believes that they made “a huge mistake” (no pun intended, he says).

Obesity is medically defined as “excessive body fat”,  yet BMI is only a size measure. Wilson also says that he can tell how big someone is by simply looking at them.

Although BMI and percent body fat correlate in populations, BMI doesn’t tell you anything about how much fat is in an individual, he says. Wilson makes the point that he treat individual patients, not populations.

“When you lose or gain weight, BMI tells you absolutely nothing about exactly what you gained or lost. Was it muscle, water, fat, or organ tissue? Without actually measuring body composition you are only guessing – never a good idea in medicine and science.

As a result, Wilson started measuring body composition on all his patients. And over several decades he has measured over 10,000 such readings in primary care. Wilson refers to a 1999 article in the New England Journal of Medicine “telling us dummies in front-line medicine how to diagnose obesity”. It went along with the NIH decision to use BMI.

At the time, the NEJM published a letter from Wilson essentially telling the experts that their recommendations were “foolish and unscientific”.

He cites an example: Actor and former California governor Arnold Schwarzenegger who had a BMI of 30.1 at age 29, very close to Trump’s BMI.  Schwarzenegger’s percentage body fat was 7%, an extremely low reading.

Wilson estimates that Trump’s percentage body fat is between 30% and 40%.

Of course, he acknowledges that it’s possible to be obese but metabolically healthy. But that’s only in a small percentage of those with excessive body fat. In his patients. Wilson also noticed some patients with a normal or low BMI had percentage body fat readings in the obese range.

These are the ones termed “skinny fat”, he says. And they usually suffer from metabolic problems and chronic inflammation, which Wilson calls “the scourge of most chronic diseases”.

It is clear from looking at Trump that he has excessive body fat, especially at the waist, Wilson says. This “central obesity” is “more dangerous than obesity that is evenly spread throughout the body”.

That’s because excessive body fat in the abdominal area is highly correlated with chronic inflammation in the body. And this type of inflammation drives virtually all serious chronic diseases such as type 2 diabetes, heart disease, hypertension, strokes and many common auto-immune diseases.

Traditionally, research has associated LDL cholesterol with cardiovascular disease, Wilson says. It has also been the target of treatment with statin-type drugs. But the reality is more complex.

“We know Trump is obese,” Wilson says.  And he almost certainly has significant excessive body fat, he says. But we know nothing about his metabolic health – apart from what his physical appearance strongly suggests.

Is Trump the ‘lucky one’?

“He could be one of the lucky few who have excessive body fat but no metabolic or inflammation problems. But if I were him I wouldn’t ignore the possible risks to his physical and mental health,” Wilson says

That’s because doctors know that excessive body fat is also strongly associated with most chronic brain problems, he says.

CARB syndrome can be associated with up to 22 symptoms that can have profound adverse effects on all areas of executive brain function, Wilson says.

“It’s possible that in the future we will eventually face a country full of obese folks with poor brain function.”

He recommends that Trump “wakes up and finally takes his own obvious obesity problem seriously”. He should initiate programs to reverse this trend on a national level”.