If you think robust evidence of serious health risks has dealt a terminal blow to the billion-dollar statin industry’s heart, think again. Statins are still the world’s most prescribed drug and the drug industry’s most profitable medicine ever.

In a new meta-analysis in The Lancet, UK scientists attempt CPR on the drug’s ailing reputation. They want doctors to prescribe statins to more people over 75. They say that doing so will save 8000 lives annually. Some experts have even called for doctors to put just about everyone, including children, on the drugs. The authors also claim that statins produce “significant reductions in vascular events (heart attack and stroke) irrespective of age”.

Independent researchers say those claims don’t stand up to scrutiny and the study is riddled with terminal errors. They also say the authors are conflicted with long-term links with drug companies.

Editors-in-chief of 24 major cardiovascular journals worldwide have joined the fray. In a co-ordinated defence of statins in an editorial in the Journal of the American Heart Association (JAHA), they “sound the alarm that human lives are at stake”. They say the danger is from  “medical misinformation” on statins that “travels faster through social networks than truth”.

They say that risks about statins are overhyped and due to “rogue” voices. “In many instances, celebrities, activists, and politicians convey false information”, they say. And not uncommonly, “authors with purely venal motives participate”.

British public health researcher Dr Zoë Harcombe sees things through a very different, independent lens. Although she is not a medical doctor, Harcombe has done intensive research into the cholesterol-lowering drugs.

She once memorably called them “one of the biggest crimes against humanity that the pharmaceutical industry has unleashed”.

In a rapid-response critique of The Lancet study, she identifies material errors and false claims. Among others, Harcombe hones in on the study’s main recommendation of statins for those over 75.

She cites the “warnings and precautions” list on the package insert of Lipitor, the most prescribed statin: “Speak to your doctor, pharmacist or nurse before taking Lipitor if ….  you are older than 70.”

Scottish MD Malcolm Kendrick says that The Lancet authors are conflicted. And that it shows in their many false claims.

Kendrick has decades of clinical experience in treatment of CVD. He is also author of The Great Cholesterol Con: The Truth About What Really Causes Heart Disease and How To Avoid it.

His latest book due for release in June is A Statin Nation: Damaging Millions in a Brave New Post-health World.

Spoiler alert: Kendrick does not believe that a deficiency of statins causes heart disease.

Essentially, (the authors of The Lancet study and JAHA editorial) feel that certain issues, such as prescribing statins, are so vitally important that critics should be silenced. Perhaps all these editors should try reading this: 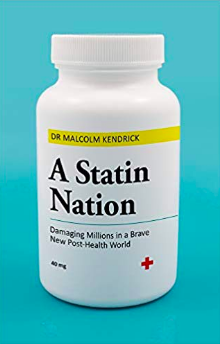 ‘Congress shall make no law respecting an establishment of religion or prohibiting the free exercise thereof; or abridging the freedom of speech, or of the press; or the right of the people peaceably to assemble, and to petition the Government for a redress of grievances.’

Yes, the US founding fathers knew the first thing tyrannies always wish to do is remove freedom of speech. From that, all else follows. If they don’t get that message, they should all be forced to read 1984 by George Orwell.

“Freedom is the freedom to say that two plus two make four. If that is granted, all else follows.”

Getting back to The Lancet paper. What do I think of it? The first thing to note is ‘who done it’.

Well, of course, it was the Cholesterol Treatment Trialists Collaboration (CTT) from Oxford. Run by Professor Sir Rory Collins and Professor Colin Baigent. They do almost all these meta-analyses on statins because they hold all the data. So, no-one else can really do them.

Pact with devil or drug companies?

The CTT are very closely associated with the Oxford Clinical Trials Service Unit (CTSU). The CTSU is run by, and has employed, most of those in the CTT. Collins and Baigent, etc.

The CTSU is a clinical trials unit. Last time I looked, it had obtained nearly £300 million in funding from the pharmaceutical industry for running clinical trials on various cholesterol lowering medications.

The CTT will not let anyone else see the data they hold. Including all the data on adverse events [side-effects] and serious adverse events. It is kept completely secret.

Anyway, my point here is that the CTT is a horribly conflicted organisation that has been paid, directly or indirectly, a great deal of money by the pharmaceutical industry.

(Editor’s note: Click here for the long list of conflicts of interest Kendrick gives for The Lancet authors. It’s a sobering read.)

As to the study itself. I wrote this as a rapid response to an article Baignet wrote in The BMJ about the study: I would like to ask Colin Baigent one question: … why did you call this study ‘Efficacy and safety of statin therapy in older people: a meta-analysis of individual participant data from 28 randomised controlled trials’?  (Click here for Kendrick’s full ‘rapid response’ in The BMJ.)

Yes, they claimed to have done a meta-analysis of 28 studies, yet they could only use data from 14 to make their claims. The largest of which was the Heart Protection Study (HPS), carried out by, guess who, Rory Collins from the CTSU and CTT.

As for the actual data, it is the usual obfuscation, skirting as close to the direct lie as possible without crossing that line.

Click here to read: Really! Statins side effects all in the mind?

I will look at one issue. The main claim was that “statin therapy or a more intensive statin regimen produced a 21% (RR 0·79, 95% CI 0·77–0·81) proportional reduction in major vascular events per 1·0 mmol/L reduction in LDL cholesterol.”

A 21% reduction in major vascular events. That sounds terribly impressive. However, if you have read my book, Doctoring Data,  you will know that what is most important here is not what is said, it is what is not said.

Do you see any mention of overall mortality here? No, you don’t. Which means that it did not change. Also, you may note this wording: “reduction in major vascular events”.

What is a major vascular event? Well, it is mainly a non-fatal heart attack or a non-fatal stroke. There are other CV (cardiovascular) events but they are much less common.

A heart attack (myocardial infarction or MI) can be a crushing near-death event. It can leave the heart severely weakened and liable to trigger into a fatal heart arrhythmia at any time. The patient can be left a cardiac cripple.

Alternatively, doctors can diagnose a heart attack by a marginal rise in cardiac enzymes with no symptoms at all and no residual problems. Yet, they will list both of these events, so completely different in their impact, as a non-fatal heart attack, with precisely the same weighting.

Equally, a stroke can leave the person virtually paralysed down one side, incontinent, unable to speak, eat, or move. Or, it can be a half-hour strange sensation with slight facial weakness that fully resolves. Again, doctors will list both these events with precisely the same weighting.

That is a problem in itself, in that these trials list events of completely different severity as being equivalent. It also leads into another problem: Who will make the diagnosis of a mild heart attack or stroke – and on what grounds?

It will most likely be a doctor. And that doctor will have prior knowledge of whether or not the patient was on a statin – or placebo. Yes, I know, clinical trials are supposed to be double-blinded. Which means that neither the participant, nor the investigator, should know who is taking the drug, or the placebo.

However, in reality, they both know full well.

I was at a meeting a while back where one of the investigators for the PCKS-9 drug Repatha was talking about the study. At one point he mentioned that a trial participant told him that he knew he was not taking the cholesterol-lowering agent. When questioned how he knew, he said: “Because my cholesterol level is the same as it always was.”

He still wanted to continue on the trial because he thought he was doing a “good” thing and helping to move medicine forward – and suchlike. It may be considered churlish to point out that the only thing he was helping to move forward was the profit margins for Amgen.

The reality is that when you have a medication that has a significant effect, e.g. lowering cholesterol by 40%, this is a very difficult to thing to hide from the patient or the doctor. They can see the figures on a computer screen in front of them.

And when you are on a clinical trial and you enter hospital, the doctors have to be told you are in a clinical trial and what it is. So, these double blinded studies on statins are not effectively, or even remotely, double-blinded. Which means that bias in clinical decision-making is now an option.

Was it a heart attack, or not? Well, they are on a statin, so probably not. Or, they are taking a placebo, so it probably is. Bias, the very thing you are trying to remove has crept straight back in the side door.

Another issue with an event is that there are many different sorts of clinical event. Death would be one – obviously. Breaking your leg another. Kidney failure would also count as one, as would a severe rash, or emergency admission to a hospital for almost any reason.

So, when a study states, as this one does, ‘reduction in major vascular events’, my mind, as it is now trained to do, thinks to itself: “ What about other events that happened to them? Were they also reduced, did they stay the same or did they go up?”

Because if you reduce major vascular events but other serious events go up, then you have achieved exactly and precisely nothing.

This is a variation on pushing people off cliffs to stop them dying of heart attacks.

Results: ‘Pushing 100 people prevented all trial participants from suffering a fatal heart attack. We therefore recommend pushing everyone off a cliff to reduce the incidence of heart attacks in the general population.’ A.N. Idiot et al.

Which leads on to the next question, do we know from the statin trials if statins do reduce SAEs in total? The answer is that we do not know this, for sure. That’s because the CTT has these data, and refuses to let anyone else see them.

However, Big Brother has not censored some data. The Cochrane collaboration (before they started the sad slide to bias and corruption) looked at this issue – way back in 2003. They got as much data as they could from the five major primary prevention statin trials at the time.

Here was (The Cochrane Collaboration) conclusion on SAEs:

Serious adverse event data is available to trial authors, drug companies and drug regulators. The other measure of overall impact, total mortality, is available in all five trials and is not reduced by statin therapy.

What does this mean in reality? Well, gathering it all together: Statins (in the over 75s) do not reduce mortality. They do not prevent fatal MIs and strokes. While they reduce serious cardiac events, previously published results demonstrate they do not reduce total serious adverse events.

Which means that they are, wait for it, absolutely and completely useless.

Two plus two does equal four. Always bear that fact in mind.