Some find it puzzling that cardiologists still tell patients to avoid saturated fat like the plague. And that they also tell patients to lower their levels of so-called “bad” LDL cholesterol.

It’s as if cardiologists don’t know that there isn’t such a thing as “good” or “bad” cholesterol. And that LDL isn’t cholesterol at all. Never was, as Scottish GP Dr MalColm Kendrick explains in this two-part series.

Kendrick has a special interest and clinical experience in cardiovascular disease over decades. He is a voice of sanity in a mad scientific debate. Here, Kendrick explains why saturated fat can’t “cause” heart disease by raising blood LDL cholesterol levels. And why there are more important things to worry about for your heart’s sake.  – Marika Sboros

“Explanations exist; they have existed for all time; there is always a well-known solution to every human problem — neat, plausible, and wrong.’ HL Mencken.

Of all the flaws of the human mind, the Number One must be the overwhelming desire to find simple, easy to understand answers – to everything. I think this is why my favourite film of all time is Twelve Angry Men. It was a stage play first.

A black youth is accused of killing his father. The evidence that the prosecution has presented seems utterly overwhelming. A unique knife is used for the murder, one that the youth was known to carry. He was seen leaving the apartment after shouting “I’ll kill you”,  and suchlike.

In the film, prejudice presses down heavily on most of the jurors. There are hints that some would have found him guilty no matter if there had been any evidence or not.

Here we have all the worst aspects of human decision making on show. Confirmation bias, prejudice, gathering together only the evidence that supports a case. And the desire to “get on with it” and not hang about listening to people who just want to make things complicated.

In my mind, for many years, I have changed “black youth” into the word, “cholesterol”, as I watch “heart disease jurors” in action. A suspect was found, fitted up, put on trial and found guilty by people just desperate to get on with it.

(In the US) at the very first congressional meetings on dietary guidelines, officials railroaded any attempts to wait until there was sufficient evidence.

In this article on Diabetes.co.uk website, the author writes:

“When the US government introduced ‘Dietary Goals for the United States’, they did not have unanimous support. The guidelines, which urged the public to cut saturated fat from their diet, were challenged by a number of scientists in a Congressional hearing. The findings were not based on sufficient evidence, they argued.

“They were ignored. Dr Robert Olson recounts an exchange with Senator George McGovern in which he said: ‘I plead in my report and will plead again orally here for more research on the problem before we make announcements to the American public.’

“McGovern replied: Senators don’t have the luxury that the research scientist does of waiting until every last shred of evidence is in.’ ”

Click here to read: Teicholz: how low-fat diets can kill you

McGovern might as well have said: “Listen, son, we know that saturated fat raises cholesterol and causes heart disease, we don’t need any damned evidence.”

Of course, they didn’t have any evidence at all. None. But they still managed to find saturated fat and cholesterol guilty. Some people would call this proper leadership. Make a decision and go with it.

I would call it monumental stupidity.

I am stepping back in this blog to look at saturated fat – again. That’s because I am going to share some thinking with you, which I have not really shared before. 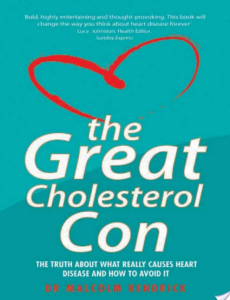 Some of you will know that I am a “first principles” kind of guy. I take very little at face value. And I am certainly highly critical of accepted wisdom. I usually translate it, in my mind, into accepted stupidity.

So, I am going to try and explain to you that saturated fat cannot raise blood cholesterol levels. By which I mean low-density lipoprotein levels (LDLs). This is the substance which someone or another ended up calling “bad” cholesterol.

LDL is the lipoprotein that is thought to cause CVD.

However, LDL is not cholesterol and never was. We do not have a blood cholesterol level. But we are seemingly stuck with this hopelessly inaccurate terminology for all time.

Anyway,  the driver of the idea that saturated fat raised cholesterol in the late 1940s was Ancel Keys. The first point here is that when Keys first started his anti-fat crusade, no-one knew that there was such a thing as LDL. You took a blood test, gathered together all the lipoproteins you could find (good, bad, indifferent) and measured them all.

Quite what they were measuring is a good question.

Despite this rather important gap in his knowledge, Keys was able to create an equation to exactly predict the effect of saturated and polyunsaturated fatty acids in the diet on serum cholesterol levels.

This became the accepted wisdom. You could believe, given the apparent precision of this equation, that Keys did some proper research to prove it was true.

Keys even knew this himself. To quote him from a paper in 1956:

“In the adult man, the serum cholesterol level is essentially independent of the cholesterol intake over the whole range of human diets.”

In 1997, Keys, emeritus professor at University of Minnesota, wrote:

“There’s no connection whatsoever between cholesterol in food and cholesterol in blood. And we’ve known that all along. Cholesterol in the diet doesn’t matter at all unless you happen to be a chicken or a rabbit.”

More recently, experts have reaffirmed the fact that cholesterol in the diet has no impact on “cholesterol levels” or CVD. In 2015, the US Dietary Guidelines Advisory Committee, having reviewed all the evidence, made this statement: “Cholesterol is not considered a nutrient of concern for overconsumption.”

The likes of Walter Willet and Steven Nissen even supported it:

“Nutrition experts like Dr Walter Willett, chair of the Department of Nutrition at Harvard School of Public Health, called the plan a reasonable move. Dr Steven Nissen, chair of cardiovascular medicine at the Cleveland Clinic, told USA Today: ‘It’s the right decision. We got the dietary guidelines wrong.’ “

Anyway, Keys had started out with a hypothesis that cholesterol in the diet raised cholesterol levels in the blood. But he discarded it after feeding eggs to volunteers (eggs contain more cholesterol than any other food) and finding that their cholesterol level remained stubbornly unchanged.

Undaunted, he did what no scientist should ever do: He simply changed the hypothesis. The nutrient of concern was no longer cholesterol, it was saturated fat. So, what is it about saturated fat that can raise LDL? I wanted to know the exact, proven, mechanism.

We start with the certain knowledge that the body is exceptionally good at keeping all substances in the blood under strict control. If the level of something rises too high, mechanisms are triggered to bring them back under down, and vice-versa.

The entire system is known as homeostasis. Thus, if saturated fat intake really does cause LDL levels to reach damaging levels, it must be overcoming homeostasis, and breaking metabolic and physiological systems. How does it do this?

To try to answer this question, we should look at what happens to saturated fat when we eat it. The first step is that it binds to binds to bile salts in the bowel. Bile salts are a form of mildly adapted cholesterol, synthesized in the liver and released from the gall bladder.

Without bile, the body cannot absorb fat well, if at all. Fat simply passes through the guts and out the other end.

The body then packs the absorbed saturated fat  into a very large lipoprotein (known as a chylomicron). Once a chylomicron is formed, it travels up a special tube, called the thoracic duct, and is released directly into the bloodstream. However, tt does not –  and this is important – pass through the liver.

Thereafter, chylomicrons travel around the body, lose their fat and shrink down until they become about the size of an LDL. At which point they are called chylomicron remnants. The liver absorbs these back  – using LDL receptors – and breaks them down into their constituent parts

Therefore, a small amount of fat that you eat will end up in the liver. However, the vast, vast, majority will go straight from the guts to fat cells (adipose tissue). Whereupon the body stores them away for later use.

In fact, this is the fate of all types of fat: saturated, polyunsaturated, or monounsaturated. Therefore, there is nothing unique about saturated fat in the way that the body absorbs and transports it around.

And anyway, as you may have noticed, none of this has anything to do with LDL whatsoever. Nothing. Ergo, the consumption of saturated fat, or any fat, can have no direct impact on LDL levels.

I suppose the next question to ask is simple: Where does LDL come from?

LDL is created when VLDLs (very low-density lipoproteins) shrink down in size. VLDLs are the type of lipoproteins that the body synthesises in the liver and then releases into the bloodstream.

They contain fat and cholesterol. And as they travel around the body, they lose fat and become smaller and smaller. That’s until they become an LDL, which contains proportionately more cholesterol.

LDL receptors in the liver remove almost all LDL molecules from the circulation. These are then broken down and the contents used again. Some LDL continues to circulate in the blood. Thus, cells that need more cholesterol synthesize an LDL receptor to bind to LDL molecules and bring the entire LDL/LDL receptor complex into the cells.