South African scientist Prof Tim Noakes is a free man. Noakes has won his final battle with the Health Professions Council of South Africa on a charge of professional misconduct for a single tweet.

The HPCSA’s committee has dismissed an appeal against the comprehensive not-guilty verdict for Noakes in April 2017. (Click here to read the full decision.)

The unanimous ruling came down late on Friday, June 8, 2018. It is as complete an exoneration as Noakes could have hoped for.

It clears him of any wrong-doing in his tweeted exchanged to a breastfeeding mother in February 2014. Noakes dared to tweet that good first foods for infant weaning are LCHF (low-carb, high-fat).

Crucially, the ruling confirms that his tweet was neither “unconventional” nor “dangerous” as the HPCSA claimed. In other words, that LCHF is no threat to babies – or anyone else, as the HPCSA and its expert witnesses claimed.

The appeal committee is also highly critical of the HPCSA’s prosecution of its case against Noakes. The ruling criticises the HPCSA for effectively thumb-sucking the claim of a “duty to protect the public” in appeal. It dismisses the claim as an afterthought, “a fishing expedition”.

Noakes’s lawyers pointed out that the HPCSA only made the claim after they realised their case was unlikely to succeed.

Thus, the ruling also confirmed the main defence submission. That the HPCSA’s case against him was without merit from the start. In other words, the HPCSA should not have embarked on it in the first place.

When Noakes and instructing attorney, Adam Pike, of Pike Law, announced the ruling on Friday, social media went into overdrive. And stayed there.

Doctors, scientists, dietitians and others globally tweeted and posted Facebook messages of support for Noakes.

That has left the HPCSA reflecting on losing a case that lasted more than four years and cost millions. It lost the case despite instructing an expensive team of external lawyers after gaping holes appeared in its case late in 2015.

The HPCSA didn’t help itself with the “ferocity” of its prosecution – as Noakes’s lawyers described it. They called it “an unprecedented prosecution and persecution of a distinguished scientist for his scientific opinions”.

In their closing arguments first time round, they said that the HPCSA went after Noakes on the whim of a “disgruntled dietitian”, Johannesburg dietitian Claire Julsing Strydom. Strydom was president of the Association for Dietetics in South Africa (ADSA) when she reported him to the HPCSA for his tweet.

They argued that Strydom was disgruntled because the public was listening more to him than to her. And that she used her position as ADSA president and his tweet as a pretext to persuade the HPCSA to prosecute him.

Noakes has welcomed the ruling as everything he hoped for – well, almost everything.

“I always expected that (the decision) would go my way,” he told me immediately after receiving the ruling. It came as “a huge relief” even as it “hasn’t yet sunk in”.

He has had “troubled, weird dreams” in the nights before the ruling, he said. Noakes expects to sleep easier once it sinks into his mind that it “really is all over”.

The case was both a professional and emotional burden from the outset, he said. The worst moments, the “nadir”, he called it, came when the HPCSA began presenting its case.”It exposed the pettiness and incivility of the prosecution,” Noakes said. It exposed “the hostility of the expert witnesses and the banality of their arguments”. 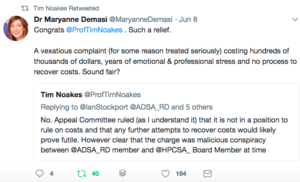 “I’m glad it is all over because it means we don’t have to do any more to expose the mendacity of what was going on behind the scenes between ADSA and the HPCSA,” Noakes said.

Pike has also welcomed the ruling – despite the lateness. It came more than two months after the March 31, 2018, deadline.

“It took a little long and we were becoming impatient,” he said.

That made it difficult for Noakes’s legal team to “exercise the requisite patience”. But when the ruling came it was “well worth the wait”.

“It was as good as we expected,” Pike said. “It exposed the prosecution and the manner in which the HPCSA undertook it”.

The appeal ruling accepted Noakes’s “true position”. He did not have a doctor-patient relationship with the breastfeeding mother. He acted as a scientist and tweeted scientific information.”

It’s true that the three-member appeal committee of two lawyers and a medical doctor did their job. And they did it as well as anyone could expect of them.

They stuck to the evidence for what they identified as the three main issues:

They found comprehensively for Noakes on all counts. They set aside the defence counter appeal arguing for costs, as there was no cost order in the first verdict.

However, much as his lawyers might have hoped, their ruling does not speak to the manifest unfairness of the process. Nor does it shed light on evidence of hypocrisy, double-standards and chronic breach of his rights in the HPCSA’s prosecution of Noakes.

The reality is, say legal experts, that Strydom couldn’t have done it all on her own.

She had extensive help from academics and doctors at all three of South African universities – Cape Town (Noakes alma mater), Stellenbosch and the Witwatersrand. It’s probably also no coincidence that most, if not all, have food and drug industry links.

Among these is UCT nutrition professor Marjanne Senekal. Senekal was a colleague of Noakes, in the same faculty. She became a consultant to the HPCSA after its case began to falter.

Evidence also suggested that Senekal and Stellenbosch became also involved in questionable research. It is the Naude Review, named after lead author from Stellenbosch Dr Celeste Naude. The hearing heard evidence that the researchers embarked on it with the specific aim of propping up the case against Noakes.

In Lore of Nutrition, which Noakes and I have co-authored, we expose the organised campaign that the many conflicted doctors, dietitians and academics conducted against Noakes and LCHF for years. We name and shame them all.

Their silence – and the silence of all their universities – in the wake of revelations at the hearing and documented in our book is astonishing and disturbing.

Our ongoing research has identified another disturbing phenomenon: academic bullying or “mobbing”. It is not restricted to Noakes or this case.

Evidence suggests it’s one reason that so many health professionals could act in concert against Noakes. And lay the fertile groundwork for the HPCSA’s eventual case against him.

And why, so far, they have done so with impunity.

Other important evidence that the appeal ruling did not canvas showed that the process really was rigged against Noakes from the start. And that it began with the HPCSA’s own preliminary inquiry committee.

Evidence on the record includes an incriminating chain of emailed correspondence between Dhai and her committee. (The evidence fell into the lap of Noakes’s legal team quite by accident during the disciplinary hearing.)

It shows them going far beyond their legal – and ethical – remit. They indulged, as his lawyers diplomatically argued, in “highly irregular conduct” to ensure that the case proceeded.

That went some way to answering a question the hearing raised. Just how did Strydom, a dietitian with a business to protect, manage so easily to get a statutory body (the HPCSA) to do her bidding?

In effect, the evidence strongly suggested that vested interests used Strydom as a pawn. And that Noakes and LCHF were always the targets.

The evidence also suggested that whether by default or design, Strydom and other ADSA dietitians have probably been pawns in this case.

That points to another limiting factor of the appeal ruling. The committee could not canvass new evidence that came to light since the not-guilty verdict last year. It showed up in a PAIA (Promotion of Access to Information Act) request that Noakes’s instructing attorney, Adam Pike, made to ADSA in June 2017.

In one email Strydom and Gallagher appeal to Wentzel-Viljoen for help with the “Tim Noakes problem”. 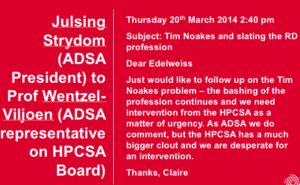 Crucially, Wentzel-Viljoen communicates with them before Noakes’s February 2014 tweet. In a later email, she reassures Strydom and Gallagher that the HPCSA “has a plan” for Noakes.

Coupled with correspondence exchanged between role players even before Noakes’s tweet, the correspondence between Dhai and her committee members makes it even harder for them all to argue good faith.

It supports the defence closing argument that Strydom was not just disgruntled but also “vexatious”. Thus, the case against him amounted to “malicious prosecution”.

Set up from start

It also supports the argument that he was set-up from the start.

Noakes hopes that the committee’s finding will drive LCHF as a treatment option in future. And that it will contribute to much-needed change in conventional, unscientific low-fat, high-carb dietary guidelines.

Going forward, there are many in this case who can count themselves lucky that Noakes is not in vengeful mode. Despite that, many on social media continue to ask why he doesn’t sue the main architects of the case against him.

The trial has cost him dearly both emotionally and financially. The financial burden would have been far heavier had his advocates Michael van der Nest (SC) and Dr Ravin “Rocky” Ramdass not offered their services for free from the start and throughout.

Noakes is grateful simply that his academic career, reputation and scientific legacy are intact. And with the wisdom of his good friend, hindsight, he would do it all again. He and wife Marilyn never faltered in their decision to fight the charge against him.

“We knew that we had right and truth on our side,” he said. “It may take time but truth always wins.”