In China, a “cuppa” usually means a cup of green tea. Green tea is a staple of traditional Chinese medicine and has been for centuries.

It is popular globally these days as people drink it to treat a wide variety of ailments. These range from mood disorders to digestive complaints, aches and pains and even cancer.

Canadian-Chinese nephrologist (kidney specialist) Dr Jason Fung is a big fan of tea – green and black. He is also a big fan of fasting.

Fung introduced fasting as a therapeutic option for patients about five years ago. That’s part of his Intensive Dietary Management program for weight loss and type 2 diabetes reversal.

Here, Fung looks at why green tea is helpful for fasting and weight loss. – Marika Sboros

Our singular focus (in the Intensive Dietary Management program) on dietary interventions rather than medications has allowed some remarkable successes.

While fasting is effective, it’s not always easy. And I’ve looked for ways to make it easier for patients.

After all, if something is hard but good for you, then we, as physicians, should not say: “Don’t do it.” Instead, we should ask: “How can I help you?”

When we give chemotherapy for cancer, we don’t say to patients: “Well, it’s really tough, so forget it.

“Yes, the cancer will kill you but we don’t think you’re up to it”.

That’s ridiculous. Instead, we look for ways to make the treatment tolerable — anti-nausea medications, pain medicines and such.

At the time the IDM program started, no decent reference books on fasting and very little good information were available anywhere. That was the case even on the Internet, which has information on everything.

With nothing available, I wrote The Complete Guide to Fasting to provide a trustworthy, reliable source of credible information. The same problem exists for fasting aids. There is simply nothing available for people who have trouble dealing with hunger pangs and other issues while fasting. 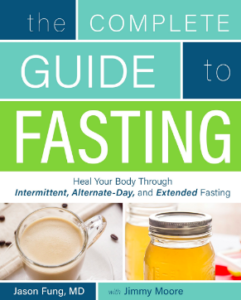 If nothing was available, then I would need to create it from scratch. Sure, some people take to fasting like a duck to water. But others have issues, and there is nothing designed specifically to help them. Until now.

I’ve always encouraged patients to drink green and black tea during the fasting period for a number of reasons. Successful weight loss depends NOT on counting calories but upon controlling the body’s hunger mechanisms and energy expenditure.

With weight loss, hunger increases and basal metabolic rate decreases. And this compensation often leads to weight regain. Does anything help?

Many clinical studies support the weight loss effects of green tea. The compounds responsible for the benefits are thought to be the green tea catechins (GTC), of which EGCG is the main one.

The GTCs activate the sympathetic nervous system (SNS), responsible for the so-called “fight or flight” response. When confronted with a lion, for example, the SNS is stimulated to prepare the body for upcoming action. That’s to either fight or run really fast.

Since green tea contains both GTC + caffeine, this could work together to increase the calorie expenditure by up to 4%. That’s a rather significant amount of energy if sustained daily.

SNS activation metabolizes body fat (lipolysis). It also pushes stored energy (glucose and body fat) into a readily usable form (blood glucose) to prepare for the upcoming fight or flight. Certain areas of body fat, the abdominal areas are more sensitive to the fat burning effects than others.

For example, one study in type 2 diabetes showed that green tea could reduce waist size even though body weight was unchanged. That indicated a decrease in the dangerous visceral fat.

In diseases of excess nutrition, anti-nutrients (such as fiber) can be valuable tools. Taking GTC with food (meals) may lead to malabsorption of up to 25% of the glucose load. GTC blocks the enzymes needed for carbohydrate absorption, and some of it passes right through our bodies.

In one study, researchers gave participants a carbohydrate-rich meal (rice) with a mixture of green tea, black tea and mulberry and measured the amount of breath hydrogen. When carbohydrates are eaten but not absorbed, they ferment in the intestinal system and produce hydrogren, which scientists can then measure.

The tea mixture clearly blocked the body from absorbing all the available carbohydrate. That’s exactly the effect we want for weight loss and type 2 diabetes.

The potential benefits of green tea as an aid to fasting is very promising. In medicine, doctors must evaluate every potential therapy according to the benefit/risk ratio.

The benefits of green tea are smallish but the risks are almost non-existent. People have used the tea without major health issue for millennia. If there was going to be a problem, we, as humans would have known about it long ago. Thus, the benefit/risk ratio is very high for the use of tea.

So, just drink some green tea? Not so fast. You would need to drink upwards of five to  cups per day to get the doses of GTCs used in those studies that showed benefits. This might work in Asia but elsewhere, three cups would be a more reasonable amount.

Cold brewing is a potential work-around to drinking 10 cups a day.

The cold-brew process is more familiar in coffee and allows for better tasting coffee for several reasons. Coffee contains many aromatic chemicals that are water soluble. Hot water brewing extracts these solubles quickly and releases them into the air.

That’s why there is such a nice smell in the room.

Using this same idea, cold brew tea is able to extract more fully the delicate polyphenols and catechins thought to be responsible for much of green tea’s metabolic benefits.

You can steep green tea in room temperature water for six hours to extract more of the catechins out. This sounds kind of daunting. But it isn’t much different from cold-brewed coffee, which requires overnight steeping.

Getting the balance right

This method extracts up to two or three times the amount of GTCs from the green tea, compared to hot-water brewing. You could drink two to three cups per day of cold-brewed tea to obtain the equivalent amount of catechins used in studies (five to 10 cups per day).

This “wholefoods” method of cold brewing tea preserves all the natural elements in its natural balance. Compare that with trying to buy industrially processed green tea extracts.

There are some more convenient options available. Some companies have cold brewed green tea dehydrated into convenient single serving packages. This preserves the high catechin content without the need to cold brew the beverage yourself.

I understand fully that fasting is not always easy. It’s no shame to get some help. In almost every other pursuit in life (like golf) there are aids. They might look ridiculous but we still use them because they are useful.

Green tea may allow people to harness the healing power of their own bodies. If they are better able to deal with hunger, then they can allow their bodies to “eat” their own body fat. That’s the precise reason why it is there in the first place.

If green tea allows people metabolic rate to maintain stability, that may be the knife edge between failure and success.