Australian physician Dr Joe Kosterich is right about Big Pharma and Big Food. Both have a right to make a living, he says. Just as we all have the right. And just as many of us have, Kosterich has a healthy scepticism about the way these industries conduct themselves.

They have no right to mislead the public with false claims about their products, he says. Nor do they have a right to skew research in their favour. That is scientific fraud and puts profits before patients. Yet both industries chronically indulge in it.

Kosterich has been looking at lessons Big Food has learned from Big Pharma’s scare tactics, “disease mongering” and conflicts of interest.

One lesson is about best ways to silence what industry proxies call the “noisy group”. These are renegade doctors, dietitians and citizens who do not receive payment from processed food manufacturers, says Kosterich. The industry, therefore, perceives them as a threat – which they are.

Another devilish lesson lies in halo effects from “health washing”. Health washing is rampant in both industries. US “marketoonist” Tom Fishburne calls it a “close cousin to green washing”. It’s about “spinning a product to make it sound better than it is”. And he should know.

Fishburne is a veteran marketer and cartoonist who started cartooning as a student at Harvard Business School. He says that it’s tempting to highlight the best features of a product and minimise the rest. However, there’s a “slippery slope from milking a ‘health halo’ to health-washing”. His book,  Your Ad Ignored here , is well worth buying, as funny as it is deadly serious.

Let me be very clear. We all have to make a living. And only the government can forcibly extract money to keep itself going. The rest of us need to exchange goods or services in return for money.

A business that employs people needs to do the same. Otherwise, it goes broke and people lose their jobs.

I have been a critic of some of the ways the pharmaceutical industry conducts itself. Disease mongering that classifies normal human emotion or physiology as a disease needing treatment is a great way to sell more product.

However, it is the legitimate commercial role of these companies to sell products and make a profit. The big problem has been the public health people, academics and those sitting on review panels and guideline setting committees who take money from industry and don’t declare it.

They create the appearance of independence which these companies then use.  Without the third party “credibility”, it would be more difficult for them to get consumers to believe the claims.

The food industry is now playing the same game. Like Big Pharma, Big Food has a legitimate interest in selling products. Endorsement by health practitioners and foundations can give foods a health halo and increase sales. 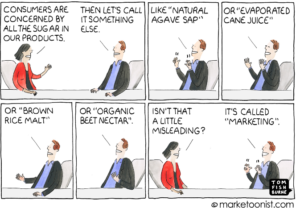 The food industry learned in the 1980’s, when the fat-is-bad mantra started, that low-fat foods would sell – because consumers perceived these foods as healthy.

Click here to read: Why dietitians’ associations may regret ‘sleeping with the enemy’

The fact that they were not healthy was not a bother to them or their boosters in public health. (To be fair, they did have less evidence than today that these claims were misguided).

The Heart Foundation and Dieticians’ Association of Australia (DAA) even promote the dollar value of “partnerships” with them to marketers on their websites.

As I wrote last week, Kellogg’s commissioned a report on the role of grains in the diet. They paid for the report and Nutrition Research Australia (NRA) did the report.

The people behind this fully support the role of grains. So, Kellogg’s could have confidence in the final report with no need to influence its production in any way.

According to the NRA website, it provides “quality outcomes, focused research in a timely manner”. It also notes that its founder, a Dr Flávia-Fayet Moore, is a registered nutritionist and accredited practising dietician.

Good for her. This line of work will be far more profitable than consulting with patients all day.

It appears that NRA produces the outcomes that those who engage it like. Previous research found that eating breakfast cereal was important for children. Nestlé and Cereal partners worldwide commissioned the research.

Nestlé and Uncle Tobys also supported a paper on the snack habits of children. One wonders if a carrot stick was as good as a muesli bar? And Nestlé commissioned this one on milk and Milo drink.

The Australian Breakfast Cereal Manufacturers forum provided a research grant for this work that aims to gloss over the sugar content in breakfast cereal.

Apparently, those who eat breakfast cereal have the lowest “added sugar” intake. However, given the sugar content of these products, there is clearly no need to add any.

The Kellogg’s report formed the basis of a press release by the assistant health minister who also features in a video which is on the website, Grain Fibre And Our Economy. The owner of the domain is Kellogg’s and although their logo appears on the home page as having commissioned the report there is nothing to suggest that they totally control the site. It appears independent.

The video featuring a minister would (in my opinion, wrongly) give it credibility.

But even this was not enough. The impressively named International Carbohydrate Quality Consortium weighed in too. News.com.au reports that according to Prof Jennie Brand-Miller from the University of Sydney there is a “noisy group” trying to convince people to cut down on carbohydrates.

“In a bid to increase the consumption of whole grains, the International Carbohydrate Quality Consortium (ICQC) – a group of about 30 nutrition academics, epidemiologists and scientists – has released a consensus report on their health benefits,” notes the same article.

ICQC had a nice meeting in Italy in September. Amongst their sponsors are Nestlé, Barilla, General Mills, and the European Fruit Juice Association.

If Kellogg’s or Nestlé or any food maker came out and made claims about their products we would see that as part of a marketing push. Fair enough. The information would be seen as advertising.

This does not make it false but does mean we may be more questioning.

When public health academics, researchers and impressively named groups make claims, we assume that they are experts who know what they are talking about. When they are effectively indirectly paid spruikers there is a problem. That they do not openly disclose financial ties is a bigger problem.

In contrast to all this hyperbole, the independent Cochrane Collaboration found differently: “There is insufficient evidence from randomised controlled trials to date to recommend consumption of whole grain diets to reduce the risk of cardiovascular disease, or lower blood cholesterol, or blood pressure.”

It found that trials were of poor quality, small size and at high risk of bias.

This noisy group comprises citizens, and renegade doctors and dieticians who do not receive payment from processed food manufacturers.

They are, therefore, a threat to industry and those on the gravy train. The approach, therefore, is to attempt to discredit critics and shut them down. We have seen this in Australia and South Africa.

As I stated at the outset, food manufacturers have a right to make food (healthy or not) and earn a profit by doing so. Industry moves where the public is going.

Brokers have been recommending companies which make full-fat products because that is where the public is heading. Smart companies will change tack. There is already evidence of this.

Still, they are attempting to protect their current market. This is entirely legitimate.

What is not legitimate is for dieticians, doctors, public health, and foundations to receive monies and then promote the message of the processed food manufacturers without declaring their vested interests.

The internet is very democratising. This information is out there hiding in full view. A day of reckoning for Big Food and Big Pharma is coming.