This article has been revised and updated with new information

Lore Of Nutrition is the first book that sports scientist Prof Tim Noakes and I have co-authored . The sub-title signals one major aim: Challenging Conventional Dietary Beliefs (Penguin). However, just as important is another aim: to expose the “diet dictators”.

These are the many top doctors, dietitians and academics who tried to suppress or distort the science for low-carbohydrate, high-healthy fat (LCHF) foods.  It’s no coincidence, therefore, that many, if not most, have industry links.

We have revised and updated our for the international market under the title Real Food On Trial. The subtitle is How the diet dictators tried to destroy a top scientist.

In both, we document how diet dictators and assorted hangers-on regularly tried and failed to destroy Noakes’s career. Not just his career but also his character and reputation over the years. We also show why, through their actions, eminence-based medicine is giving way to evidence-based medicine.

We show how conflicted doctors, dietitians and academics made gratuitous and often slanderous, unscientific public attacks on Noakes. And how they laid the groundwork for the Health Professions Council of South Africa (HPCSA) hearing against him.

The HPCSA charged Noakes with unprofessional conduct after a Johannesburg dietitian reported him for a single tweet in February 2014. He tweeted that good first foods for infants are LCHF. Thereafter, HPCSA set a disciplinary hearing in motion against him.

The public soon dubbed the hearing The Nutrition Trial of the 21st Century. It became a multi-million-that the HPCSA stretched over more than four years. And as we show, when the HPCSA saw that their case was weak and failing, they refused to acknowledge it. Instead, they engaged an expensive team of external lawyers to try to fill gaping holes.

In my chapters for the books, I report on the hearings in full, day in and day out. I also show how the HPCSA might have won the day were it not for Noakes’ legal team.

In our books, we documented the HPCSA’s independent panel’s comprehensive vindication of  Noakes on April 21, 2017. However, the HPCSA soon appealed the verdict and even went for a whole new hearing.

(Editor’s note: The HPCSA lost yet again. In Real Food On Trial, I document the appeal outcome confirming the first ruling in full by a majority verdict. Click here to read: Noakes free at last!  The HPCSA licks its legal wounds)

In closing comments in our books, I consider the many imponderables weighing down the HPCSA’s case. There were so many, I suggest it’s a wonder that the HPCSA got their case off the ground at all.

The first imponderable was whether the trial would have happened without the “inordinately large, incestuous web” of UCT academics. And what the net effect of the UCT cardiologists’ letter to the press in 2012, was in attacking Noakes’s views on statins. And the UCT academics’ letter to the press in 2014, accusing him of making “outrageous, unproven claims about disease prevention”.

The second imponderable was whether the trial have happened were it not for the HPCSA’s first committee members. The committee chair just happens to be the head of medical bioethics at the University of the Witwatersrand. What if she had not gone so far beyond her remit and allowed committee members to do the same?

Overall, our books reflect badly on South Africa’s top universities – UCT, University of Stellenbosch and Wits University, my alma mater. However, North West University does not emerge unscathed either.

Even the Liverpool School of Tropical Medicine in the UK became infected with dodgy behaviour along the way.

And of course, the Association for Dietetics in South Africa (ADSA), comes out looking less than its best.

I raise another important imponderable: the contribution of ADSA’s leadership profile to the trial. These have always been mostly privileged white, middle-class, conservative women with shared cultural backgrounds. And they are drawn mostly from a closed shop of friends, or friends of friends.

It may just be coincidence that many of them are undeclared vegetarians or vegans. And that their antipathy to LCHF and Noakes is legendary.

I speculate that it may be tempting to think there surely can’t be so many top doctors, dietitians and academics out of step except Noakes. However, I have carefully recorded the evidence to show that it’s not just possible, as anything is. And that in this case, it’s highly probable. All that evidence is on public record in the HPCSA’s hearing transcripts it went mostly unchallenged and uncontested. 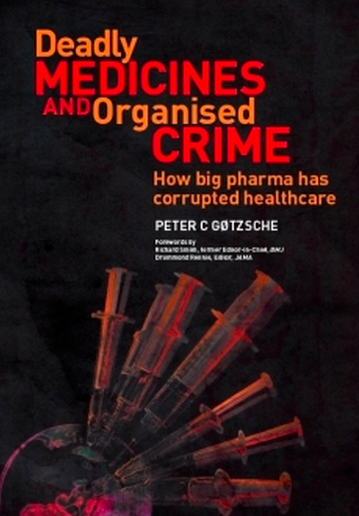 In a preface to Lore of Nutrition, Noakes talks about the omertà that diet dictators appear to have sworn. Omertà is the Italian word for the code of “honour” and vow of silence in organised crime. It places importance on silence and non-interference in the illegal actions of others. Noakes notes that he is not the first to compare modern medicine and its pharmaceutical-science model to organised crime.

Danish physician Dr Peter Gøtzsche did it first in his groundbreaking book, Deadly Medicines and Organised Crime. The sub-title: How Big Pharma Has Corrupted Healthcare.

Noakes calls it “a compelling, disturbing read”. He says that it is “perhaps the most disquieting book” about his profession that he has ever read.

I felt the same about the evidence I heard and reported on in the book during the HPCSA hearings. I found it deeply disturbing to realise just what all these diet dictators were getting up to behind the scenes. All aimed at muzzling a distinguished scientist because they objected to his scientific opinions on diet and nutrition.

The walls of silence both Noakes and I came up against in writing this book were no deterrent. On the contrary, those walls simply confirmed our suspicions of hidden agendas and organised campaigns behind them.

In our books, Noakes, his “Angel” experts  present an alternative to the pessimistic, paternalistic model of medical science. They give the scientific evidence to show that obesity is not the result of gluttony and sloth. They give patients hope. Noakes and the “Angels” also show that type 2 diabetes is not necessarily a chronic, progressive disease.  Patients don’t always have to fill medical and drug company coffers by taking drugs for the rest of their lives.

The author of the foreword in Lore of Nutrition is Prof JP van Niekerk, former dean of UCT medical school. He writes that changing beliefs is “incredibly hard”. Beliefs are wired into our limbic system and are “not readily amenable to our thinking brain”, Van Niekerk says.

Confirmation bias protects our beliefs from “any opposing and uncomfortable facts”, he says.

“But a fundamental characteristic of science is to constantly challenge beliefs. Noakes bravely confessed the errors of his previous beliefs about carbohydrates when he started studying evidence that was new to him.”

Van Niekerk says that Noakes’s views are simply a “reflection of a worldwide re-examination of the basis of the beliefs in “conventional’ nutrition”. Research has “shifted the ground”, he says.

There’s good reason, he says, that  “conventional” nutrition increasingly finds itself having to defend its contribution to global obesity and diabetes epidemics.

Van Niekerk is gently critical of the many medical and other healthcare professionals who oppose Noakes. They benefit from reviewing the depth of evidence he and his expert witnesses presented at the hearing. Or they need to provide “a convincing rebuttal”, he says.

To date, they have not been able to do so.

Van Niekerk is critical of the HPCSA’s case against Noakes and the appeal. He compares it to two other notable challenged cases. The first was black consciousness leader Steve Biko. The second was apartheid-era doctor Wouter Basson. In both cases, the HPCSA “bowed to outside pressures”.

Van Niekerk’s opinion of the HPCSA’s appeal is low. He believes that it won’t just be a “fruitless” waste of money. It is starting to like a “religious persecution of those of another persuasion”.

HPCSA hearings are also “not the appropriate mechanism to resolve such major and complex academic debates”, he says.

Thus, Noakes’s message to readers in both Lore of Nutrition and Real Food on Trial becomes vital:

“All people are entitled to their own opinions. But not to their own set of facts. So do not believe what you want to believe. Believe what the facts tell you is the truth.”

He speaks here in the context of junk diets, embedded scientists, corrupt – or simply ignorant – doctors and dietitians. He is also talking about human health and omertàs.

Noakes reminds you that what you believe about your personal nutrition “will determine not just how you live, but also how you die”.