Can you “eat to starve yourself of cancer”? What about fasting – can depriving yourself of food hasten starvation of a dread disease? Ask Air France captain Jean-Jacques Trochon.

Trochon is the visionary behind Rethinking Cancer, a world-first summit in Paris on September 21, 2017, on new horizons in cancer treatment. It will be held at France’s internationally renowned Gustave Roussy Cancer Institute and Espace Maurice-Tubiana Medical School.

Specialists from across the globe have accepted Trochon’s invitation to speak on what he says is a real “revolution” in cancer treatment. It is anti-angiogenesis treatments, including foods and diets aimed at making orthodox cancer treatment less toxic and more effective.

Angiogenesis is the medical term for growth of new blood vessels, including those feeding cancer cells. In other words, angiogenesis is the “hallmark of just about every kind of cancer”, Trochon says. Among the conference speakers is Dr William Li, head of the international Angiogenesis Foundation.

Also high on the conference’s anti-cancer menu are ketogenic diets and fasting. Ketogenic diets are on the low end of low-carbohydrate, high-healthy fat diets. A specialist in ketogenic diets for cancer is US  geneticist and biochemist Prof Thomas Seyfried. He is also on the speaker panel and once memorably said that doctors ” shouldn’t have to slash, burn and poison patients just to treat their cancer. There must be a gentler way.”

He has also said that cancer treatment has become a billion-dollar industry. And that vested interests work hard to protect their turf.

But just what does a pilot know about cancer research and treatment? Well, lots, as it turns out. Trochon is a cancer survivor.  In 2003, doctors diagnosed him with aggressive stage 2 kidney cancer.

He recalls the exact moment of diagnosis. It hit him, he says, not so much like a bolt out of the blue but rather a blood-red lightning flash. At the time, he was fit, an extreme athlete who did triathlons, played rugby and surfed.

While urinating one day, he suddenly had a sudden sharp pain and his urine turned a bright, fluorescent red. He knew that it was bad news and rushed to the nearest clinic.

Click here to read: Cancer: doctors have been looking in the wrong place

Doctors did a scan and picked up a 7cm kidney tumour. Within 24 hours, they had him in theatre and removed the tumour and affected kidney. The medical team anticipated metastases (cancer spread) within a few months and advised Trochon to have chemotherapy and radiation.

He started reading up on his cancer, began intensive study of biology and canvassed opinion from different experts.  That led him to make a momentous and controversial decision: to “delay chemo and radiation intelligently”.

Trochon does not encourage anyone else to do the same thing. However, he believes that the decision is why he is still around to tell his story and help others.

Of course, Trochon knew that he was taking a big risk. But he believed it was calculated. And he had based it on reading the research and canvassing a wide range of divergent, specialist opinions. He, therefore, focused his own treatment path mainly on the “twin peaks” of angiogenesis and inflammation. These create the conditions for cancer to develop and thrive in a host body, he says.

Trochon came across the work of the late US physician scientist Dr Judah Folkman on angiogenesis. Folkman, who died in 2008,  was a professor of medicine at Harvard and director of the vascular biology program at Children’s Hospital Boston.

He has been called “a path-breaking cancer researcher”, one who faced “years of scepticism before his ideas led to successful treatments”. His approach has led to several anti-angiogenesis drugs, the most well-known of which is probably Genentech’s Avastin.

Researchers say that anti-angiogenesis drugs have not lived up to their promise. However, some doctors now use angiogenesis-based treatments as adjuncts to conventional cancer protocols. They say that it can make methods, such as chemo and radiation, less toxic and more effective.

Trochon also learnt about the metabolic model of cancer based on the work of German physiologist and Nobel laureate Dr Otto Warburg in the 1920s. The model identifies errant glucose metabolism as a culprit.

Warburg described “aerobic glycolysis” – a defect in mitochondrial glucose metabolism. He showed that it causes fermentation of glucose and diverts glucose from energy production to cell growth. Seyfried is among those who have built on Warburg’s work. He has documented it in his book, Cancer as a Metabolic Disease.

From that research, Trochon says that sugar addiction really is the “Achilles heel” of cancer.  And that ketones (by-products of the body’s metabolism of fatty foods) may be one of the keys to beating cancer. As he explains it, healthy cells in the body can use glucose and ketones for fuel as alternative energy sources when the body is in a state of ketosis. It’s a natural body state and very different from ketoacidosis, a potentially fatal condition seen mostly in type 1 diabetics.

Cancer cells have, in effect, “lost time memory” Trochon says. Put another way, “they lack the ability to transition from using glucose to using ketones”.

Thus Trochon started his remarkable journey back to health by making radical changes to his diet and lifestyle. He cut refined sugar and other carbohydrates from his diet, went on a strict ketogenic diet and ate anti-angiogenesis foods. He added meditation to the mix.

Initially, the signs were auspicious and at the five-year mark in 2008 – conventional medicine’s bewitching “golden hour” – doctors declared him in remission, as close to “cured” as modern medicine could bring him. They also told him that he could now live a “normal” life.

He became complacent, he says, and returned to most of his old eating and lifestyle habits. In 2012, scans showed lung metastases from the kidney cancer. That led Trochon to meet French renal cancer specialist Dr Bernard Escudier, another speaker at the Paris summit.

Escudier is a trained cardiologist who joined the Gustave Roussy Institute in 1983. He later led the Immunotherapy Unit, and  developed programs in renal cell carcinoma (RCC) and melanoma. His major fields are now RCC, immunotherapy (cytokines, vaccine), and developing new strategies (antiangiogenic drugs, gene therapy). He was also a principal investigator of RCC trials from phase I to III.

Between 2012 and 2014, successive scans showed up to 26 tumours on Trochon’s lungs. Doctors described him as “a tumour-making machine” – an image as grim as the conventional prognosis. They estimated that the tumours were growing at a rate of around 12% every three months.

The team, including Escudier, advised adding anti-angiogenic or immunotherapy treatment as a preventive move.

Trochon chose to delay immunotherapy and to adapt his “shotgun approach” to  fighting the disease. He adapted the protocol that he had developed first time round and that he follows to this day. His eating mixes ketogenic and an anti-angiogenesis diet, supplements and fasting.

He also takes some supplements, including  a spirulina product that French specialist Dr Jean Louis Vidalo developed initially to treat malnutrition globally. It is nutrient-dense and also fights inflammation by acting like “a vacuum cleaner”, Trochon says. It mops up internal toxins, such as heavy metals, that contribute to inflammation, he says. 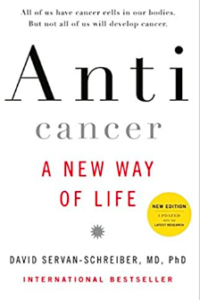 Along that path, some books have been seminal. Doctor friends recommended  Anticancer: A New Way of Life by US-based French psychiatrist and neuroscientist Dr David Servan-Schreiber. His book is the fruits of his own research into the connection between diet and cancer, the inextricable link between body and mind and the role of hope in beating dread disease.

He was able to survive 18 years after a diagnosis of a malignant brain tumour but was diagnosed again in 2010 and died 13 months later.

Servan-Schreiber was clearly not against conventional medicine. However, he said that doctors too often believed that alternative or complementary approaches risked giving “false hope”. And that this thinking “robs patients of their power to act”.

Thus, Servan-Schreiber made it his mission to spread the message about lifestyle changes that could improve patients’ chances of survival.

‘Tripping over the truth’ 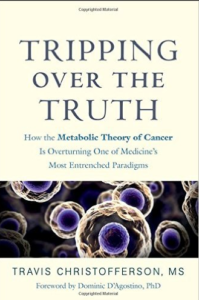 Another book that proved inspirational for Trochon is Cancer treatment road ahead: Tripping over truth by Travis Christofferson. Christofferson challenges orthodoxy and explains why he believes that cancer research is too often “way off track”.

Trochon now lectures globally and shares his case with scientists, doctors and patients worldwide on international platforms. Hundreds of people, mainly in France, are following his protocol under medical supervision. Some will join him as speakers at the Paris summit to show “proof of concept”.

Clearly, doctors are not winning the “War on Cancer” that former US president Richard Nixon declared in 1971. They have won skirmishes and the US Dana Farber Institute and ” countless successes “. However, it also realistically calls cancer “one of the most resilient and recalcitrant enemies” that mankind has faced.

Trochon is one of many who believes in a gentler way of treating cancer. He continues to spread the message of his path to “living with, not dying from, cancer”.