Loneliness – the word reeks of sadness and longing. Language created it to express the pain of being alone. So said German-American existentialist philosopher and theologian Paul Tillich.

Tillich distinguished loneliness from “solitude”, which he said expresses “the glory of being alone”. And research shows that loneliness is not only a psychological issue but a medical one.

Below, Icelandic cardiologist Dr Axel Sigurdsson explains why loneliness can affect the main organs associated with feelings: hearts and minds. He shows why it is possible to die from a broken heart. Sigurdsson delves into how and why loneliness really can be lethal. Along the way, he shows why social contact can effectively be ‘food’ for body and mind. – MARIKA SBOROS

Loneliness and social isolation are becoming problems of epidemic proportions. The global statistics are chilling. Today, at least 25% of Americans say that have no one with whom to discuss important matters important.

What is even scarier is that loneliness is killing people.

Research associates loneliness and social isolation with an increased risk of early mortality. Being socially connected is shown to increase psychological and emotional well-being. It also has a positive influence on physical health.

Although psychologists usually associate loneliness with social isolation, it is important to discriminate between the two. Social isolation refers to a lack of contact with other people. Loneliness indicates a state of mind.

Despite these definitions, there is significant overlap between social isolation and loneliness. Hence, many often use the terms interchangeably.

Analysts project that changes in marital and childbearing patterns and the age structure of the US society will produce a steady increase in the number of older people who lack spouses or children.

Since 1970, the composition of households and families and the marital status and living arrangements of adults in the US have experienced marked changes. For example, the proportion of the population of married couples with children decreased and that of single mothers increased. As well, over time, the median age at first marriage has grown.

The negative health consequences of social isolation are particularly strong among some of the fastest growing segments of the population. These are the elderly, the poor, and minorities such as African Americans.

Psychologists say that loneliness is a subjective feeling of isolation, not belonging, or lacking companionship. It reflects a discrepancy between desired and actual social relationships. A person can feel lonely despite living with a spouse or other family members. Some can experience loneliness in a room full of people.

Definition of being lonely

Lonely respondents were less likely to be involved in activities that build social networks, such as attending religious services, volunteering, participating in a community organization or spending time on a hobby.

Researchers define social isolation as a state of complete or near complete lack of contact between an individual and society. It includes living alone, staying home for lengthy periods, having no communication with family, acquaintances or friends, and willfully avoiding contact with other humans.

Social isolation may have significant effects on health and well-being.

Click here to read: Perfect storm of heart disease: how to protect yourself

But why is social isolation associated with poor health? The “social control hypothesis” may provide some answers. The theory holds that good health behaviours may be promoted by direct social control.

For example, one study showed that among women, direct social control (ie how often someone tells you or reminds you to do something to protect your health) predicted increased physical activity three years later.

Being married is associated with an increased likelihood of engaging in health-promoting behaviours such as exercise. Presumably, that’s because marital partners exert some influence over these behaviours.

However, scientific studies have indicated an association between social isolation, loneliness and heart disease. Studies also associate loneliness with impaired cognitive function and increased risk of dementia. Loneliness may even alter our immune response, increasing the risk of illness

The tale of Roseto

The story of the Rosetans may help to understand the importance of family relations and social surroundings for the risk of heart disease. 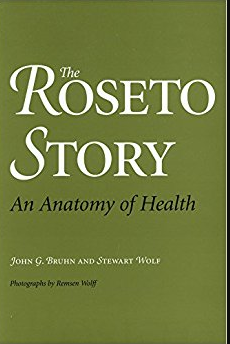 Roseto is an Italian-American town in eastern Pennsylvania. In the early 1960s, a local physician, Dr. Benjamin Falcone pointed out that he rarely saw a case of a heart attack in any of the 1600 inhabitants of Roseto under age of 65. Subsequently, data confirmed that from 1955 to 1965 the death rate from heart attack was markedly lower than in nearby communities and the rest of the country.

However, the usual risk factors were not less common in Roseto than elsewhere. The men spent their days doing hazardous labour in underground slate mines. Smoking was common.

The traditional Italian food had been Americanized, and could not be considered heart healthy. So why weren’t the Rosetans dropping dead from heart attacks?

Dr Stewart Wolf and coworkers described the social and family structure of the inhabitants of Roseto:

“The Roseto that we saw in the early 1960s was sustained by the traditional value of southern Italian villagers. The family, not the individual, was the unit of their society. The community was their base of operations and each inhabitant felt a responsibility for its welfare and quality. Most households contained three generations.

Rosetans were proud and happy, generous, hospitable and ready to celebrate any small triumph of their citizens. The elderly were not only cherished but, instead of being retired from family and community responsibilities, they were promoted to the ‘supreme court’.

No shortage of stress

“There was no shortage of stress among Rosetans. They experienced many of the same social problems and personal conflicts as their neighbors, but they had a philosophy of cohesion with powerful support from family and neighbor and deep religious convictions to shield them against and counteract the stresses.”

(Editor’s note: Wolf is known as ‘the father of psychosomatic medicine’. He is also author of The Roseto Story, An Anatomy of Health.)

Researchers now use the Roseto effect to describe the phenomenon by which a close-knit community experiences a reduced rate of heart disease.

Psychologists have developed interventions to tackle social isolation and loneliness. However, there is little evidence to show that they work.

Part of the problem is that many people don’t understand the mechanisms by which loneliness and social isolation impact on health. However, national and international public health authorities increasingly recognize the importance of tackling social isolation and loneliness among older people.

In the UK, five partner organisations established the Campaign to End Loneliness in 2011. It is a network of national, regional and local organizations and people working together through community action, good practice, research, and policy. The aim is to ensure that authorities act on loneliness as a public health priority at national and local levels.

In 2016, the National Association of Area Agencies and the AARP Foundation launched a campaign to raise awareness of social isolation and loneliness in older Americans. They created a brochure to outline risk factors and steps seniors can take.

The bottom line is the need for recognition of the links between poor health and loneliness.