There’s something deliciously karmic about Big Food finally getting a taste of its own medicine. 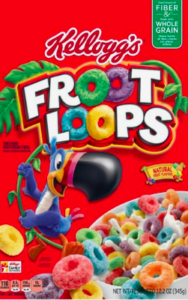 Years ago, I interviewed the head dietitian for that Big Food stalwart, Kellogg’s. She tried hard to persuade me that the company’s popular Fruit Loops product really was a healthy breakfast food for children.

‘Do you give them to your children for breakfast,’ I asked, looking her straight in the eye. To her credit, she hesitated long and hard before saying, ‘Yes.’ It was an awkward moment because she knew that I knew she was lying. But then, she had a job to do. In the trade, it’s called ‘eating your own dog food’, or ‘dogfooding’ for short.

The software industry adopted it years ago for the process of actually using your own product.

Below, one of my favourite nutrition bloggers poses an intriguing question. What if, to rise up in the ranks, managers in food and soft drink companies had to make a simple commitment: to ‘dogfood’ from now on. In other words, Big Food executives would have to take daily doses of their own ‘medicine’.

Why Buffet drinks so much Coke

If they were working for Warren Buffett, he would set the best example. Buffett enjoys a reputation as one of the world’s most successful investors. 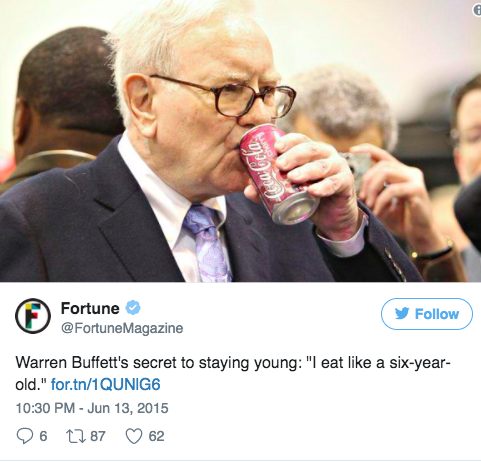 One writer has called him the ‘most eager and demonstrative consumer of his own companies’ foodstuffs’. Buffett has had a large stake in Coca-Cola for years, also in Heinz and Kraft. In a Fortune article last year, he claimed to drink at least five 12-ounce servings of Coca-Cola daily.

Buffet gave his secret to staying young as that he ‘eats like a six-year-old’. He sounded just like a six-year-old in the interview. The headline summed it up: he’s not sure that ‘ditching Coke for broccoli would make (him) any healthier’.

The author of the article below writes under the pseudonym, Sammy Pepys. He is not a doctor or a dietitian but he is studying public health. He is concerned about the lack of progress in tackling spiralling rates of obesity, type 2 diabetes and related diseases.

The great lateral thinking expert, Edward de Bono, likes to tell the story of a factory that needs clean water for its industrial processes. As a result, it pollutes the river water for town inhabitants living downstream of the factory.

The clever town council didn’t want to pass any draconian laws or get the factory to co-sponsor water filtration in the river. Instead, it simply mandated that the factory takes its fresh water from somewhere downstream of its own industrial buildings (see below).

Thus, the factory then became a victim of its own effluence. This decision provided an existential threat to the continued use of the factory. And those running the factory solved the problem – quickly.

As a clever ‘lateral thinking’ approach, it is one which those in the real world have used. At an individual level, it is the equivalent of giving people a taste of their own medicine. In other words, giving them the same treatment that they dish out to others.

But, could a lateral-thinking approach help deal with our increasingly obese world and rising levels of insulin resistance?

The UN commissioned work at the start of its Decade of Nutrition (2016-2025). It revealed a strong association between ‘ultra-processed food and drink’ and the spread of chronic disease. A BMJ article from 2016 showed how ‘added sugar’ also correlates strongly with this ultra-processed category.

Ultra-processed food was defined as formulations of several ingredients. Besides salt, sugar, oils and fats, these include food substances not used in culinary preparations. In particular, these also include flavours, colours, sweeteners, emulsifiers and other additives.

Big Food manufacturers use these to imitate sensorial qualities of unprocessed or minimally processed foods and their culinary preparations or to disguise undesirable qualities of the final product.

In total, added sugars represented one in five of these ultra-processed food calories (21.1%). That was far higher than the other three categories of processed foods at 2.4%, unprocessed/minimally processed foods, and processed culinary ingredients grouped together at 3.7%.

So, is ultra-processed food just guilty by association? After all, we know that correlation does not prove causation. But there again, the UN-anchored hypothesis on the table is that a significant reduction in the amount of processed food consumed would lead to less chronic disease.

That is – to put it mildly – not in the interest of large food companies, whether manufacturers, distributors or retailers. That’s because Big Food companies rely heavily on the higher levels of profit they obtain with these hyper-processed packaged foods.

To stop this hypothesis from becoming mainstream thought, they are fighting this connection tooth and nail. And yet, the US-based research pointed clearly at something most of us would have no problem accepting at an instinctive level.

The authors wrote: ‘This study suggests that decreasing the dietary share of ultra-processed foods is a rational and effective way to improve the nutritional quality of US diets.’

But does Big Food really want what’s best for us?

Click here to read: Big Pharma: dose of own medicine

Here’s what Nestlé – the world’s largest food and beverage company say: ‘Our purpose is enhancing quality of life and contributing to a healthier future. We want to help shape a better and healthier world. We also want to inspire people to live healthier lives.’

The Kraft Heinz Company is the third-largest food/beverage company in North America and the fifth-largest in the world. It claims to provide ‘high-quality, great taste and nutrition for all eating occasions whether at home, in restaurants or on the go’.

The About Us website listings certainly make it sound as if they only want the best for us. Nestlé wants to contribute to ‘a healthier future’, Kraft Heinz aims for ‘great taste and nutrition’. And just this month, PepsiCo announced the ‘first eight nutrition, health and wellness brands joining its collaborative incubator programme in Europe’.

All these Big Food and Soft Drink companies claim to be interested in our good health and in creating a better world. And yet I somehow doubt it.

Pretty much all of the packaged food, drink and fast-food they produce falls within the ultra-processed category. So, these representatives of Big Food are major contributors to arguably the biggest health problem currently facing civilisation.

That is the huge rise in number of those suffering from non-communicable chronic diseases, such as type-2 diabetes, obesity and Alzheimer’s.

That’s what now provides our starting point for revisiting the successful type of approach used by that father of lateral thinking, Edward de Bono.

Instead of repeatedly over-analysing macro and/or micro ingredients and playing around with formulations and percentages, we should simply accept the UN recommendations that the whole category of Ultra Processed Produce (UPPs) is deeply problematic.

In the bigger scheme of things, reducing the sugar content of breakfast cereal by 10% won’t be of much help. Nor will 20 or 30% for that matter, particularly when it’s often replaced by synthetic alternatives such as aspartame.

The biggest change to our eating habits over the last 50 years, as the world becomes progressively more Westernised, is that people rely more and more on processed, packaged goods. That is the real problem we face.

Because many don’t understand or accept this clearly, they have not communicated a vital point effectively. That is that there is also a price to pay for such convenience; an environmental cost and a personal health cost for these ‘faster’, less perishable foods. In the US, UPPs already represent on average 60% of the annual calorific intake.

For many individuals, it’s a much higher percentage and the rest of the world is quickly playing catch up.

The idea = The solution:

I am sure managers at Food & Beverage companies do from time to time eat their own food or drink their own drinks. But what would happen if, in order to step up and become a senior manager, they needed to make one simple commitment? That is to sign up for food and drink exclusively sourced from their own product portfolio.

Why not? After all, company PR statements always emphasise the nutritious and positive qualities of their goods. They also often so together with some expression of deep concern for humanity. We’d have to enforce it properly, of course.

If you were caught out, you’d have to leave your well-paid job. But there again, what would be so wrong with that?

Perhaps, as a result, one of these Big Food CEO’s would then feel obliged to state clearly that the major part of your diet should come from real food and home cooking. And that you should use their branded foods and drinks only occasionally.

In itself, that would represent just a small step but one that would already be a very big deal. 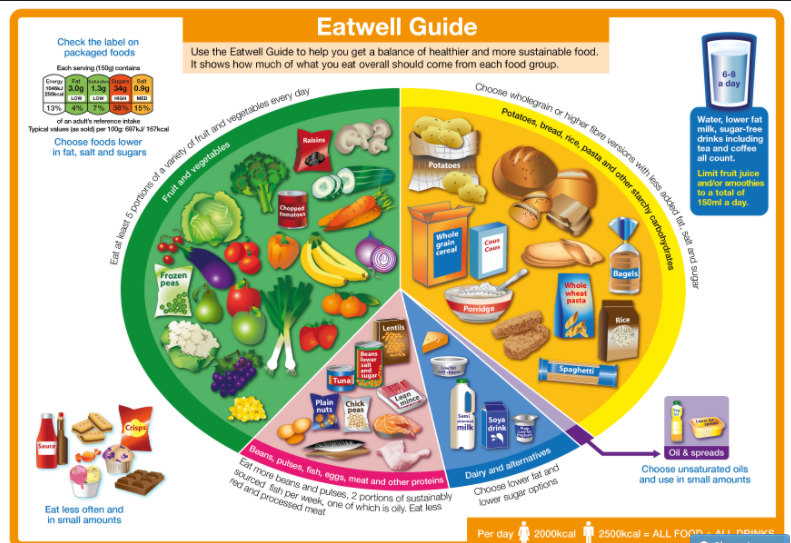 That’s because nutritional guidelines, such as (Public Health England’s) Eatwell Guide do not state anywhere that you should eat ultra-processed foods only occasionally.

It is my considered opinion, which the UN documentation supports, that the most important nutrition message of all is totally missing from today’s guidelines. Encouraging people to go low-fat or eat 5-a-day, even if it were a good message, is not the same as telling people that they are self-harming on too much ultra-processed food and drink.

Piling on the junk

You’re thinking that this would be too limiting for these poor Big Food execs, aren’t you? Well consider this:

As a senior manager at PepsiCo, you could start the day with Aunt Jemima pancake syrup on your Quaker Oats and a glass of Tropicana OJ. You could snack on Lays, Walkers or Cheetos during the day. If you’re thirsty, you could drink Gatorade, 7UP or Pepsi.

Then you could dip Doritos in your Sabra hummus before dining out at Pizza Hut or KFC, with whom PepsiCo has lifetime contracts.

What could be so wrong with that? After all: at http://www.balanceus.org/en/, Pepsi together with Coke and Dr Pepper have ‘come together to support your family’s efforts to balance what you eat, drink and do’.

But you might have to interpret and express balance rather differently when faced with eating exclusively from your own ultra-processed product portfolio.

You’d be receiving a strong taste of your own medicine. What do you think?