What does obesity have to do with hearts? Lots. Icelandic cardiologist Dr Axel Sigurdsson spoke recently at a meeting mostly of cardiologists and endocrinologists.

He discussed, among others, the current status of diet-heart hypothesis that saturated fat causes heart disease. And the possible relationship between fear of dietary fats and the obesity epidemic.

After the meeting, a senior colleague, an old friend and mentor,  lambasted him privately. He said that the mortality from heart disease had dropped dramatically for the last 30 to 40 years, mostly from dietary changes to lower blood cholesterol.

He was angry that Sigurdsson suggested that the emphasis on low-fat food products ultimately had steered people into an epidemic of obesity, metabolic syndrome and diabetes. Here, Sigurdsson explains how and why low-fat diets contribute to obesity and a whole lot more. – MARIKA SBOROS

During (my discussion with my mentor), I came to think of Dr Tim Noakes’s words at the Foodloose Convention in Reykjavik last year. He touched upon the same issue. I had the privilege to speak at the same conference. It gave me the opportunity to meet and talk with Tim for the first time. 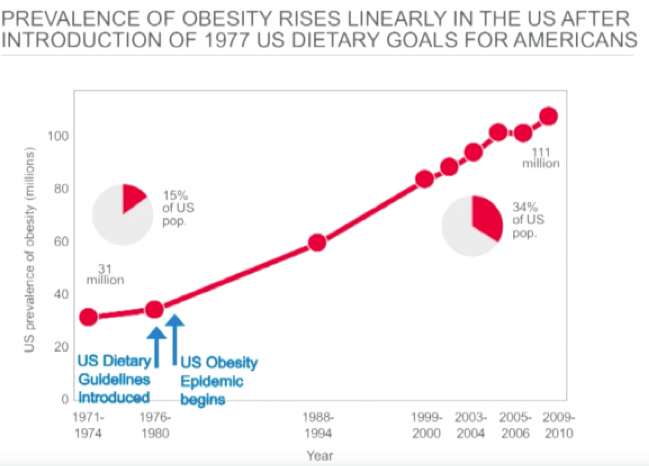 ‘… the dietary guidelines changed in 1977 and in 1978 the obesity epidemic begins in the United States, and no one will take responsibility for that. And that’s the question you have to ask.

‘You change the guidelines and why won’t you take responsibility for what happened? Why do you ignore it? And, why do you attack us for asking that question?’

Yes, these were the words I remembered so vividly: … ‘and, why do you attack us for asking that question?’

Sixty years ago, American psychologist Leon Festinger described a phenomenon he called cognitive dissonance.   He believed that we hold many cognitions about the world and ourselves. When they clash, it evokes a discrepancy, resulting in a state of tension known as cognitive dissonance.

Our powerful motive to maintain cognitive consistency can give rise to irrational and sometimes maladaptive behavior.

‘A man with a conviction is a hard man to change. Tell him you disagree and he turns away. Show him facts or figures and he questions your sources. Appeal to logic and he fails to see your point. ‘

Well, I guess you’re assuming that I think my senior colleague and old mentor suffers from cognitive dissonance. And you’re right, I do. But, I also know he thinks I’ve completely gone off the rails.

So, how can a low-fat diet lead to an epidemic of obesity, metabolic syndrome, and diabetes?

The second fact is that according to recently published evidence, at least 50% of the adult population in the US has insulin resistance. It manifests as diabetes or prediabetes.

The role of insulin resistance

Finally, there is evidence from several studies on human metabolism showing that insulin resistance and high-carb diets make a destructive combination. And, remember, at least half of the U.S population is insulin resistant.

‘Insulin resistance is a benign condition. However, a high carbohydrate diet turns it into a killer.’

Noakes believes that the macronutrient of interest in chronic disease is carbohydrate, not fat:

‘They completely got it wrong. Ancel Keys backed the wrong horse completely. But, this truth comes through understanding human metabolism, not epidemiology.’

Insulin resistance is defined as a diminished response to a given concentration of insulin. Initially, the pancreas responds by producing more insulin (compensatory hyperinsulinemia). For this reason, individuals with insulin resistance often have high levels of insulin in their blood.

Gerald Reaven is professor emeritus in medicine at the Stanford University School of Medicine. He was the first to emphasise the role of insulin resistance and compensatory hyperinsulinemia in increasing the likelihood of developing the cluster of abnormalities commonly referred to as the metabolic syndrome.

The five conditions described below are used to define the metabolic syndrome. Three of them must be present in order to be diagnosed with the condition.

In his Reykjavik lecture, Tim Noakes summarised a few Reaven’s studies on the importance of triglycerides in patients with insulin resistance.

In a study published 1966, Reaven and colleagues examined the triglyceride response to low- and high-carbohydrate diets. They discovered that the majority of patients will increase their triglyceride concentration to a variable extent as a consequence of a high-carb diet.

Interestingly, they also found that the more insulin resistance present, the greater the subsequent rise in triglycerides following the ingestion of carbohydrates. 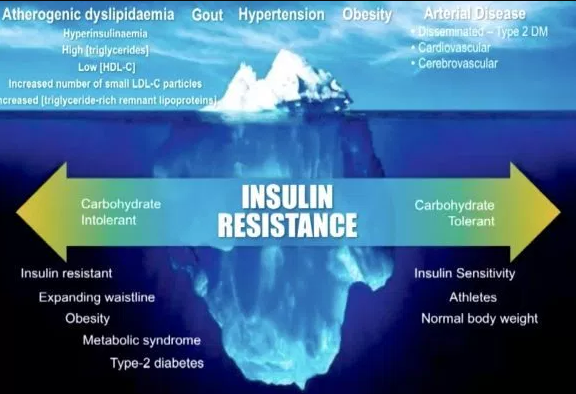 Hence, insulin resistance, accompanied by hyperinsulinemia, may be an important cause of the enhanced triglyceride production by the liver following the ingestion of a diet high in carbohydrates.

The real cause of heart disease?

Reaven developed a model explaining the relationship between insulin resistance and cardiovascular disease. He concluded that insulin resistance and hyperinsulinemia are common findings in apparently healthy individuals and associated with a number of abnormalities that significantly increase the risk of coronary artery disease.

Among them are lipid abnormalities commonly termed atherogenic dyslipidemia because they tend to promote atherosclerosis. Scientists believe that to be the underlying cause of cardiovascular disease.

Noakes believes that Reaven’s biggest mistake was not to pinpoint high-carbohydrate diets as the culprit. However, Noakes refers to three papers published by Reaven’s group between 1987-1994. This emphasises that Raven knew that carbohydrate was the villain.

Click here to read: NOAKES VERDICT: HE WON THE BATTLE BUT THE WAR GOES ON

‘So, Reaven understood that carbohydrates drive insulin secretion in the metabolic syndrome. Hence, he had to conclude that restricting carbohydrate should be the key therapy for this condition. In 1987, he was heading into that conclusion because he published three papers in 1987, 1989 and 1994 all showing the benefits of low carbohydrate diets in people with insulin resistance.’

The studies Noakes is referring to were performed on individuals with non-insulin dependent diabetes mellitus (NIDDM). That group that is highly representative for insulin resistance. Here are Reaven’s main conclusions from these three papers:

‘In NIDDM patients, high-carbohydrate diets compared with high monounsaturated fat diets caused persistent deterioriation of glycemic control and accentuation of hyperisnulinemia, as well as increased plasma triglycerides and VLDL-cholesterol levels which may not be desirable.

Why did he (Reaven) stop in 1994 doing low-carbohydrate studies? The answer is that because he was at Stanford, which is one of the most progressive cardiovascular groups. Had he come out in 1994 and said you must all eat a high-fat diet, his career would have ended overnight. And wisely he decided to continue researching without drawing attention to himself and that’s why that work is so fundamental but it has got lost.’

Non-alcoholic fatty liver disease (NAFLD) has become the leading cause of chronic liver disease in the United States and other Western countries.

A paper published 2016 suggests that the presence of NAFLD in people with insulin resistance is a key driver of atherogenic dyslipidemia so typical of the metabolic syndrome.

Patients with NAFLD are more likely to have high levels of apolipoprotein B and small LDL particles, regardless of similar body mass index and other clinical parameters. The authors speculate that this lipoprotein profile is driven mostly by liver fat content and insulin resistance and appears not to be worsened by obesity or the severity of liver disease. Hence, NAFLD may be a major link between insulin resistance, metabolic syndrome, and coronary heart disease.

In his Reykjavik lecture, Noakes said:

What they are showing for the first time is that the key driver of atherogenic dyslipidemia is NAFLD. And, how do you get NAFLD?  You get it from eating a high- carbohydrate diet feeding insulin resistance.

Noakes does an excellent job in explaining the clinical implications of the metabolic abnormalities underlying insulin resistance, visceral obesity, type 2 diabetes, and coronary heart disease, and how these may be fueled by high consumption of carbohydrates.

But if you’re carbohydrate intolerant, there’s only one way you can go; insulin resistance, expanding waistline, obesity, metabolic syndrome and type 2 diabetes await you.

And that’s the point when we’re talking about nutrition. Nutrition is not the issue. It’s the patient. And you’ve got to fit the diet the patient. People just don’t seem to get  that if you’re insulin resistant you cannot eat carbohydrates.

Noakes is convinced that a low-carbohydrate diet is a key to the prevention and treatment of insulin resistance and all its associated conditions.

If he’s right, advising everybody to consume a low-fat, high-carbohydrate may be catastrophic because at least 50% of the adult population is insulin resistant. If we put all these insulin resistant people on a high-carb diet, we may have an epidemic of obesity, metabolic syndrome and type 2 diabetes.