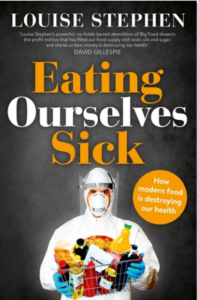 Stephen is author of Eating Ourselves Sick. The subtitle says it all: How modern food is destroying our health. She was just 33 when a life-threatening auto-immune disease abruptly ended her career. A kidney transplant allowed her to stick around to write this important book.

Australian “recovering corporate lawyer” David Gillespie sums it up well on the book’s front cover. Gillespie is author of, among others, Sweet Poison and Toxic Oils. He says that Stephen has made a “powerful, no-holds-barred demolition of Big Food”. She “dissects the profit motive that has filled our food supply with toxic oils and sugar”.

She also shows us how money destroys our health, Gillespie says.

In it, Stephen documents the rise of “micropowers”. These are are “digital Davids” that challenge once-dominant mega-players in all fields of human endeavour. They also counteract the insidious influence of food and drug industries on dietary advice.

Stephen has written an intriguing book that is the fruits of conventional medicine that saved her life and restored her health. However, it did not impress her much with its offerings thereafter.

Doctors told her that the autoimmune disease was just “bad luck”. Luckily for Stephen, she didn’t buy that.  Ditto when a doctor said that her condition was genetic,  that she was “born this way”.

Body turning on itself

Those explanations were “casual” and “didn’t add up”, she writes. She also wanted to know how her body could suddenly turn on itself. And how to stop the attacks at source.

Stephen has experienced the body’s hyper-intelligence firsthand. She also understands the extraordinary lengths to which the body goes to survive. She, therefore, wasn’t prepared to continue lifestyle habits that almost killed her. Thus, began her remarkable journey into nutrition science.

To prepare for the journey, Stephen did intensive research into the environment. That helped her to understand the role of environment in the explosive, global growth of chronic disease. A seminal book on her journey was the classic Nutrition and Physical Degeneration by Weston A Price. Almost 80 years after publication, Price’s fears for population health have proved prescient.

Scientifically, Stephen goes over some old ground in this book. She also takes the reader on vital new pitstops towards improved health. My favourite is on the rise of micropowers and the work of internationally syndicated columnist Moisés Naím. Naím is a scholar at the Carnegie Endowment for International Peace and former World Bank executive director.

He documented micropowers in an extraordinary book in 2013: The End of Power. Naim The Financial Times  called it: “a fascinating account of the way states, corporations and traditional interest groups are finding it harder to defend their redoubts.”

Stephen shows intuitive understanding of micropowers in her book. Micropowers derive strength from exploiting rivals’ weaknesses,  she says. They are bad news all round for the Goliaths in food and drug industries and traditional health authorities. Micropowers sabotage messages that traditional diet “experts” and their corporate connections preach.

Another new wellness path that Stephen identifies is “antifragility”. US former trader Nassim Nicholas Taleb coined the term in 2012. Taleb is a professor of engineering at New York University. He is also author of Antifragile: Things That Gain From Disorder.

Taleb says that the “antifragile” person is curious, takes risks, “fails small” and “fails fast”. He makes the case for “antifragile tinkering”. He views it through the prism of ancestral behaviour. Taleb says that antifragility is “beyond resilience or robustness”.

Stephen takes the concept and runs with it. If mass medicine is fragile (and inflicts fragility on others), the shift towards wellness is antifragile, she says. If the modern food-pyramid-style diet is fragile, “nutrigenomics” is antifragile. (I wouldn’t have used an “if” to begin either of those statements). Nutrigenomics is the scientific study of the interaction of nutrition and genes.

It has a special focus on nutrition to prevent or treat disease. Thus, it builds a diet based on individual genetic profile, Stephen says. And as part of personalised medicine, nutrigenomics becomes antifragility in action.

Where Big Tobacco left off

Stephen explores who and what makes so many people fat and sick. She also shows how Big Food has picked up where Big Tobacco left off. Stephen identifies Big Food’s skillful, cynical marketing to encourage greater intake of processed food. And she looks at how food and drink industries profit from “commodification” and “toxication” of food supplies.

Stephen endorses the benefits of low-carbohydrate, high-fat, or rather, healthy-fat, (LCHF) lifestyles. Consequently, she says that fats were “never the enemy”. Sugar and other processed, refined carbs were – and are – the real health demons. She also covers all bases by reminding the reader that “one diet does not fit all”.

Coca-Cola says sugar cuts have not harmed sales – how about a 100% cut then? https://t.co/TWtfLmu3gV

(Editor’s note: I have amended the review referring to the forward after a reader’s contribution.) Sydney consultant cardiologist Dr Ross Walker has written a foreword to the book. Walker says that experts have “bombarded” the public with the low-fat diet message. There has also been an explosion of pharmaceutical drugs for “all manner of diseases”. Despite this, people have grown fatter and sicker around the world.

That much certainly is true and this has spawned the marked increased in diabesity (the medical term for twin conditions of obesity and diabetes). The biggest problem, says Walker, is that modern humans are “living against (their) physiology”. By that, he means living against how their hunter-gatherer forefathers lived.

Feasts of the kill

Ancient humans had “feasts of the kill” followed by famines of food and fluid, Walker says. Therefore, they had to keep moving to find food in natural, harsh environments. These days, humans have constant feasts with much less movement, he says. They are also exposed to synthetic chemicals and varying sources of electromagnetic radiation.

He identifies three major groups that have made billions from chronic disease.  Like Stephen, he fingers the usual suspects: medical and pharmaceutical industries and multinational food companies. However, Walker says these are not the only guilty parties.

People are their own worst enemies. They indulge in forms of addictive behaviour, including drug taking and sedentary working and lifestyles, Walker says. I interpreted the latter to mean that Walker makes the case for the largely discredited CICO (calories-in, calories-out) model – that obesity is from gluttony and sloth. I saw that as a weakness in the forward and thus, the beginning of the book. However, a reader says that would be an “overreach”.

Still, I would have preferred Walker to make it clearer that CICO does not apply. CICO is still rampant in orthodox medical and dietetic circles. Consequently,  it is likely the reason for much that is not helpful in conventional dietary advice.

At heart, Stephen’s personal experience is the book’s motivating power. She also says that she may never really know the exact cause of her disease. And that having a life-threatening illness drove her to know more about her health.