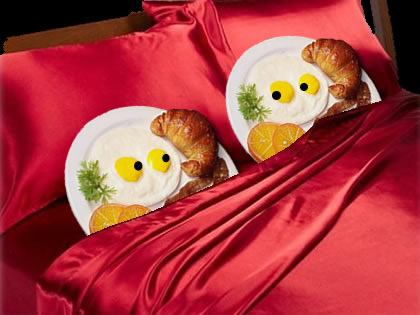 Is the Dietitians Association of Australia (DAA) in bed with Big Food? It’s nearly two years since US public health lawyer Michele Simon first raised the question. She worded it slightly differently at the time. Her answer was an unequivocal “yes” in And Now A Word From Our Sponsors in February 2015. But has anything changed in the interim?

DAA says that it is not in bed with Big Food now and never has been. It claims that its sponsors – “partners”, it prefers to call them – have no influence on the advice it dishes out.  It also claims to take “great care to guard against conflict of interest”.

Its critics say otherwise. They say that DAA is heavily conflicted and has been for decades. Critics also say that DAA is little more than a front for the food industry. Read on in the first of a four-part series and make up your own mind.

DAA calls itself the country’s “peak nutrition body”. That’s wishful thinking, say critics. What is clear is that it is a voluntary association of nutrition professionals, with branches in each state and territory and around 6,200 members. Thus, it is relatively small yet extraordinarily influential.

It is also self-regulated. Dietitians don’t have to register with the Australian Health Practitioners Regulation Agency (AHPRA) to be able to practice. Peculiarly in Australia, health authorities say dietitians pose “low risk” to the public. That’s debatable, say critics, given well-documented links between diet and disease.

And if growing criticism of DAA is anything to go by, little really has changed since Simon’s 2015 report. In the first of a four-part series, I look at elements that Simon identified and others, which I have found:

Click here to read: WHY DOES BIG FOOD LOVE DIETITIANS SO MUCH?

Hewat says in public statements that its partnerships are a “considered decision”.  DAA recognises that Australians eat from the “entire food supply”, Hewat says. Thus, DAA needs to work with groups “from all sectors, including the food industry”. 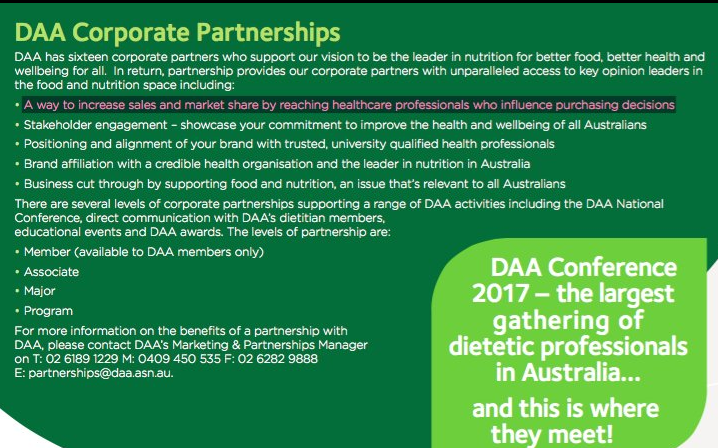 Hewat insists that trade exhibits at DAA’s National Conference do not constitute endorsement. The Conference is for food and nutrition experts, not the public.  Consequently, if a food is available, dietetics professionals “need to know about it and be able to ask questions about it”.

“We believe that by working together with all sectors we can have a positive influence on them,” she says.

Australian social entrepreneur, author, a speaker and “recovering corporate lawyer” David Gillespie says he has yet to see anything come out of the DAA that suggests anyone should regard it as “anything other than a front for the processed food industry”.

Gillespie is author of Sweet Poison: Why Sugar Makes Us Fat. In a blog, Gillespie says that “we should be cautious when DAA starts handing out advice on what to eat”. We should be “especially cautious” when some of Australia’s most powerful food companies fund that advice.

One of the biggest problems for DAA’s credibility is its claim to provide evidence-based advice. In part, that’s a function of its uncritical support for Australia’s low-fat, high-carb dietary guidelines. These closely follow the US guidelines and DAA had the contract to manage their production for the government.

British obesity researcher Dr Zoe Harcombe’s research in the BMJ Open Heart in 2015 shows that these guidelines had no randomised controlled trials (RCTs) backing them up when the US first launched them in 1977. RCTs are considered the “gold standard” of scientific research.

Guideline supporters – and DAA –  claim significant epidemiological research. However, Harcombe’s research in the British Journal of Sports Medicine in 2016 shows there wasn’t any of that either.

Australian GP, author and speaker Dr Joe Kosterich says that the guidelines “are not based on the best science we have today”.

“They remain rooted in 1970’s ideology for reasons that are not clear,” Kosterich says. “No one has ever been able to prove the notion that saturated fat causes heart disease. In fact, we’ll probably find that someone really did just make it up.”

Kosterich refers to research in the JAMA in 2014. The researchers concluded that “current evidence does not clearly support cardiovascular guidelines that encourage high consumption of polyunsaturated fatty acids and low consumption of total saturated fats”.

They also said that based on years of inaccurate message about total fat, most US residents are still “actively trying to avoid fat while eating far too many refined carbohydrates”.

“You can easily substitute residents of Australia, UK or most other countries for US residents,” Kosterich says. “Science has moved on but not everyone has moved with it. A harsh critic might contend that there are some who have their fingers in their ears and are saying: La,la,la.”

While DAA does dish up some advice that does not overtly serve sponsors’ interests, critics say that doesn’t make up for the significant volume information that does and that often lacks any evidence-base.

One example is DAA’s 7-day-meal-plan contribution to Australia’s Healthy Weight Week in 2016, which gives low-fat, high-carb advice. Independent nutrition experts say that the advice is not optimum for weight-loss long-term and is unhelpful for diabetics.

It’s the belief that gluttony and sloth have caused the twin epidemics of obesity and diabetes, which doctors now refer to as diabesity. It’s one that Coca-Cola and Big Food use to justify their products as part of a healthy, “balanced” diet.

Independent nutrition experts, however,  say that it simply is not possible to outrun a bad diet. They also say that CICO is an oversimplification that does not consider the complexity of human metabolism. 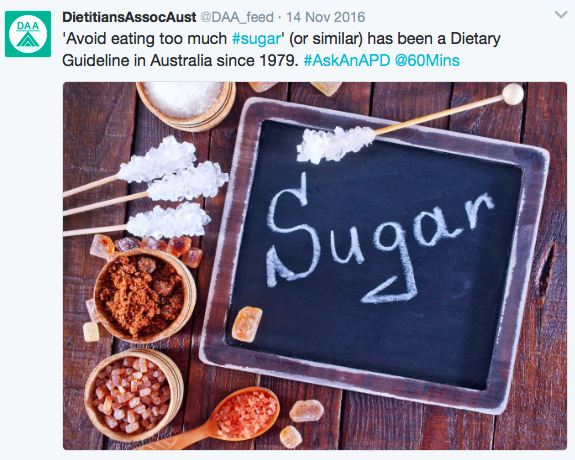 DAA also regularly claims that  “a dietary guideline in Australia since 1979” has been to “avoid eating too much sugar”. It appears oblivious to the fact that all carbohydrate foods turn to sugar (glucose) in the bloodstream.

Thus, both Hewat and DAA seem oblivious to the effects on its credibility of advice that favours high-carbs – mostly grains and legumes – and that refers to Australia’s Grains & Legumes Nutrition Council (GLNC), a former partner. Critics say it isn’t all that surprising, given that the Australian Breakfast Cereal Manufacturers Forum is a sponsor.

As well, GLNC research in New Zealand has shown that LCHF diets are hurting sales of grains and legumes. Thus, in boosting sales of those products, DAA acts in industry’s interests.

And DAA appears to be feeling the heat on its promotion of grains and legumes and/or its links with GLNC. It has done significant purging of press releases related to GLNC on its updated website. 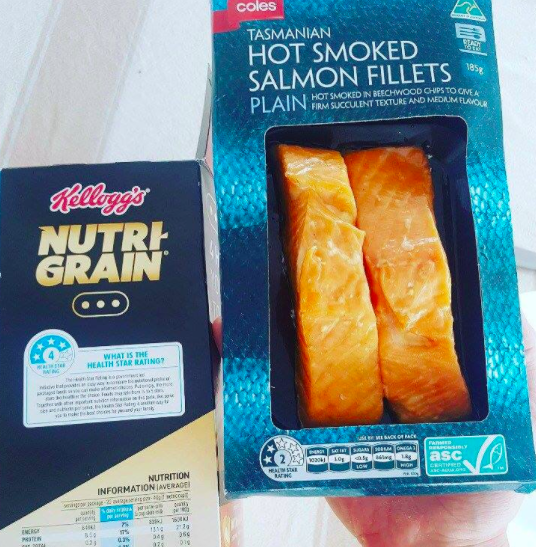 Therefore, in regularly attacking Paleo and other LCHF diets, critics say that DAA, whether by design or default, suppresses or ignores information on these as alternatives. It does so despite a growing evidence-base for safety and efficacy of these diets to treat and prevent the diabesity (obesity and diabetes) epidemics.

In an email to me, Hewat says that as DAA CEO, she sits on the Healthy Food Partnership executive. Its aim, she says, is to “drive food reformulation, improved menu choices, better nutrition education and communication and addressing issues of portion size”.

It is in this spirit that DAA engages with a range of key stakeholders, including the food industry, Hewat says.

One problem with that is the Partnership’s Health Star Rating system, which claims to support industry to “reformulate their foods”. The Health star system looks very much like a sham that supports industry, not public health.

For example, it gives Kellogg’s Nutri-Grain a four-star rating and smoked salmon fillets just two stars.  It gives a hefty five stars to a bottle of fruit juice with six spoons of sugar.