You don’t have to love dogs to appreciate the brilliance of this book on canine obesity, but it helps. It makes it easier to see why Dogs, Dog Food, and Dogma really is a riveting read. One reason is the subtitle: The Silent Epidemic Killing America’s Dogs and the New Science That Could Save Your Best Friend’s Life.

It reveals the bare bones of the raison d’etre: evidence-based solutions to the epidemic of canine obesity.

Another reason is that this book isn’t just about canine obesity. It’s also about another global epidemic: of human adipose tissue. That’s the medical profession’s euphemism for excess fat. This book looks at why obesity shortens lives, whether canine or human. And why even moderate obesity in dogs is more dangerous for them than smoking is in humans.

But this book’s biggest strength is probably US author Daniel Schulof. He is not a veterinarian, medical doctor or scientist. He makes no bones about that in his author’s note. In fact, he claims to be no expert of any kind. That’s not true, of course. He’s just humble and that’s a nice trait. Here’s his real expertise and the power of this book:

Schulof is an expert in law – an attorney, a legal eagle. He brings the predator bird’s visual acuity to the solid science and zombie dogma around obesity in this remarkable book. He honed his research skills editing law journals and researching “obscure legal nuances in high-profile litigations”.

Yet he believes that those skills haven’t done much for his scientific bona fides. I beg to differ.

Schulof is also an extreme athlete. With characteristic understatement in Dogs, Dog Food and Dogma, he calls himself a “committed athlete albeit a recreational one”. His athletic niche is ultra-distance endurance sports. He runs 100-mile ultramarathons, races Ironman-distance triathlons and climbs mountains. 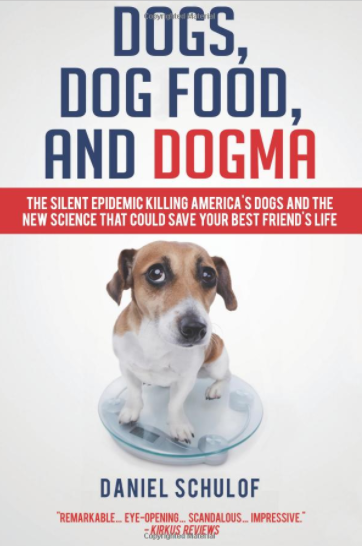 These are all endeavours in which adiposity is “highly relevant”, he says. That’s because an athlete’s body fat has a direct impact on physical performance.  Thus, Schulof had a working familiarity with the peer-reviewed literature on human adiposity before thinking about its implications for Kody.

Kody is Schulof’s beloved Rottweiler, the inspiration and true heart of this book. Kody is why Schulof set out on this remarkable journey. He wanted to answer a deceptively simple question: “How do I give my dog the best life I can?”

Oh, there’s another reason I couldn’t stop reading this book. Schulof speaks straight from the heart. His book is well-written, reader-friendly and refreshingly free of intimidating jargon. It is also an unusually heartfelt mix of raw emotion and cold, clinical science.

Schulof calls himself a “fitness research junkie”. But more than anything else, curiosity motivated him to write this book. He wanted to understand what lies behind a paradox: How dog owners in America today can be closer than ever to their dogs and yet still allow them to die from a totally preventable health problem.

In other words, are dog lovers across the globe really guilty of “loving their pets to death” as “experts” claim?

Of course not. That erroneous belief is based on the CICO (calories in, calories out) theory of obesity. It’s the thoroughly discredited one that veterinarians, medical doctors and dietitians still dish out to patients. In human terms, CICO holds that obesity is the result of gluttony and sloth. In canine terms, dog owners are killing their animals by giving them too much to eat and too little exercise.

Ditto for dogs. He shows why dogs, just like humans, cannot outrun a bad diet.

Schulof carefully tears all the flesh off CICO. He reveals the bare bones of rigorously scientific detail to show who’s really at fault here. He shows why dog owners – parents, he calls them – are victims, as their precious pets are, of veterinary nutrition misinformation.

Schulof looks at whether experts and vested interests disseminate dangerous misinformation by default or design. He assesses that information via a powerful “barometer of truth”  throughout his research for the book. It’s one he deems the best that mankind has yet devised: the rigorous scientific method.

“Frankly,” he says “that’s the only standard good enough for my dog.” And quite right too.

Schulof reveals the awful moment he first realised that Kody was overweight. He came across the website of Dr Ernie Ward, founder and chairman of the Association for Pet Obesity Prevention (APOP).  Ward crusades against the deadly health epidemic of canine obesity.

Schulof called Kody over and “went to work” using one of Ward’s diagnostic tools. It’s a step-by-step process designed to produce a measure of doggy fatness. At the end, he realised to his mounting horror that Kody was overweight.

Yet Schulof had done all the “right” things. He gave Kody regular exercise, fed him “premium” kibble, kept snacks and table scraps to a minimum.  Kody even looked fitter than most other neighbourhood dogs.  “An athlete, like his dad,” Schulof says.

He began to understand why we should all “doubt the factual validity of just about everything written about nutrition in the popular press” on human obesity. The same goes for canine nutrition.

He reveals why corporate influence and institutional bias in veterinary nutritional research are far more pervasive than even he first suspected.

Certainly, you don’t have to look too far or hard to find evidence of major financial conflicts of interest in research science on canine obesity.  The US pet food market, for example, exceeds $20 billion a year, says Schulof. He calls the industry’s leading firms “true corporate behemoths”.

As well, many leading researchers on veterinary nutrition are full-time employees of one pet food company or another, he says. Scientists also conduct much published veterinary nutritional research at private research institutions under the auspices of companies such as Purina PetCare and Mars.

“As such, the world’s leading dog food manufacturers have the power to shape the veterinary nutritional research agenda itself,” he says.

Ever the lawyer, Schulof says that none of this is proof of malfeasance.  However, he also says it’s a little naïve to put blind trust into nutritional advice that the largest human food makers in the country produce, sponsor or fund. McDonald’s may not be the most egregious example. That’s reason enough to approach existing canine obesity dogma with a little healthy skepticism.

To explain the roots of the canine obesity epidemic, he takes readers back to those roots. He looks at why dogs no longer live in ways that they evolved to live. In particular, he looks at the domestic dog’s closest genetic cousin who is “still living right under our snouts”: the wolf.

There are genetic differences. However, dogs and wolves are as genetically similar as two distinct species can be, Schulof says. Research reveals no evidence of obese wolves in the wild. Despite living in arctic conditions where blubbery adipose tissue would protect them from freezing temperatures, wolves stay slim and trim.

They also hardly ever suffer all the chronic diseases linked with obesity, says Schulof. No heart disease, diabetes, kidney failure or cancer.

Canine obesity can seem like a uniquely modern problem, he says. Industry consolidation exacerbates it. For all the choice that appears to exist in the pet food market, Schulof says that the products are more similar than different.

Essentially, all dry dog foods on the market today are built primarily around a single nutritional substrate, he says.  In evolutionary terms, it’s one pretty new to the global food landscape.  Wolves don’t eat it, dogs don’t need it, he says.

You need to read this book carefully to understand why that substrate really is the villain of the obesity piece. And what the best foods for pets really are. Sugar is part of the problem but the solution is more than just not giving dogs sweet treats.

I have deliberately not said what Schulof says dogs should eat. That’s so you don’t just take my word for it and not bother to buy the book. And when you do buy it, don’t even think of skipping to the ultimate chapter. Titled Building The Optimal Dog, it’s a treasure trove for worried parents of canine kids. In it, Schulof provides a helpful summary of his research under five principles.

He left lucrative legal practice after just a few months of feverishly following what he calls the “research rabbit hole” of canine obesity. Schulof was appalled to realise how low awareness of canine obesity is. Raising that awareness seemed to him  “a worthy professional pursuit”. In 2011 he founded Varsity Pets. His mission is simple: to end the canine obesity epidemic.

Schulof prefaces a chapter in Dogs, Dog Food, And Dogma with a quote by American philosopher, essayist and poet Henry David Thoreau: “Do what you love.  Know your own bone; gnaw at it, bury it, unearth it, and gnaw it still.”

It is Schulof’s mantra on this remarkable journey. All veterinary scientists should follow dog owners as his fellow travellers.