Australian orthopaedic surgeon Dr Gary Fettke can no longer advise his diabetic patients on nutrition to prevent limb amputation. In particular, he cannot tell patients not to eat sugar.

Why not? Because the country’s medical regulatory body, Australian Health Practitioners Regulatory Authority (AHPRA), says so. AHPRA has gone further. Even if the dietary advice Fettke has given his patients so far ever becomes mainstream, it says he must still keep silent.

Doctors globally have reacted with surprise, shock and outrage in equal measure at AHPRA’s ruling. US professor of cellular biology Richard Feinman calls the action “unbelievable”. Feinman says AHPRA is “more concerned with saving face than saving lives”. Here’s why:

Dr Gary Fettke did not advise snake oil or an untested magic-bullet drug with serious side effects. Instead, he told patients to eat less sugar and other carbohydrates. He also told them to eat more healthy fats. In other words, he advised an LCHF lifestyle. Fettke defines LCHF as low-carb, healthy fats. 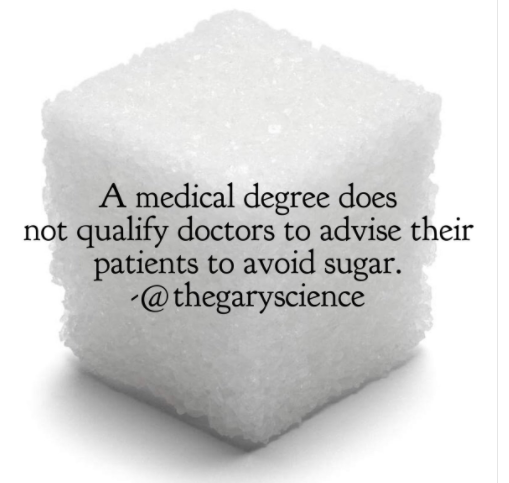 As an orthopaedic surgeon, Fettke sees many patients daily who are obese and diabetic. Both conditions are so common in Australia these days, as in other countries, that doctors call them diabesity.

Together, these conditions significantly up the risk of limb amputation.

Fettke would far rather not amputate people’s limbs. He prefers to help them keep their limbs if possible simply by changing their diets. The science is growing to suggest that LCHF may help.

That message hits hard at the heart of vested interests that benefit from conventional high-carb, low-fat nutrition “wisdom”.

It’s one that AHPRA and the Dietitians Association of Australia (DAA) dietitians who reported him don’t like to hear.

AHPRA has told Fettke: “The fundamental fact is that you are not suitably trained or educated as a medical practitioner to be providing advice or recommendations on this topic.”

These are the partners of the organisation from which the anonymous coward dietitian complainant against Gary came https://t.co/lHqtCJa2AT https://t.co/k0jxTsXUXM

It says: “There is nothing associated with your medical training or education that makes you an expert or authority in the field of nutrition, diabetes or cancer. Even if, in the future, your views on the benefits of the LCHF lifestyle become the accepted best medical practice this does not change the fundamental fact that you are not suitably trained or educated as a medical practitioner to be providing advice or recommendations on this topic.”

In other words, says Feinman, “credentials are more important than the truth”.

Yet AHPRA appears to have overlooked fundamentals about Fettke that are important here.

Fettke is a cancer survivor. His experience with conventional treatment led him to research alternatives more than a decade ago. Thus began his interest and ongoing research in nutrition as an adjunct to conventional treatment not just for cancer. Fettke has also researched benefits of low-carb, healthy fats to treat and prevent obesity and diabetes.

In going after Fettke,  AHPRA may have opened a medical Pandora’s box that it may come to regret. It goes to the heart of what it means to be a medical doctor and who can advise patients on diet. It mocks the Hippocratic injunction to “first do no harm”.  AHPRA’s action also undermines the wisdom of an ancient Chinese proverb that says: “He who takes medicine and neglects diet wastes the skill of the physician”.

It has been investigating Fettke for more than two years now. That was after the first anonymous complaint from a DAA dietitian in 2014. Earlier this year,  AHPRA told Fettke to stop talking about nutrition until it had decided on a suitable sanction.

Behind closed doors, with no right of reply or appeal for Fettke, AHPRA expanded its investigation to include the broad spectrum of LCHF. AHPRA has defended its complaints process as fair and balanced under the circumstances.

It also informed Fettke that it was investigating him for “inappropriately reversing (a patient’s) type 2 diabetes” – after another DAA dietitian’s complaint. Added to the list was that Fettke had been “disrespectful to health professionals”. In particular, this charge relates to the DAA and the Australian Heart Foundation on social media.

No names were mentioned. However, Fettke has pointed out that no patients have ever complained of harm. As well, he hasn’t ever attacked anyone by name in public. There is one notable exception – a senior medical administrator who has criticised him vociferously on and off social media.

AHPRA also accused Fettke of failing to disclose a conflict of interest (COI) in referring patients to dietitians at the Nutrition for Life Centre instead of the hospital dietitian. Although he does not work at the Centre, Fettke is the founder. He also still mentors the dietitians and wife, Belinda, runs the Centre.

Fettke told AHPRA that all the charges were groundless, including the COI. He has always declared his vested interest for all patients he referred to Nutrition for Life. He did admit “guilt” for not always doing so on social media. However, the doctor/patient relationship was “not defined in that context”.  Fettke told the AHPRA it should not be applying jurisdiction in an undefined context.

AHPRA decided not to pursue the LCHF charge against him – probably a wise move. Fettke submitted “enough material on the compelling science on LCHF for a thesis”.  AHPRA has also accepted that the benefits of LCHF may in future become accepted best medical practice.

Thus, it may just be co-incidence that Fettke received AHPRA’s full sanction within a few hours after testifying  at an Australian Senate Inquiry on November 1. Click here to read the Hansard transcript of the Senate inquiry into the medical complaints process in Australia.

It makes sobering reading. Fettke and three other doctors gave moving testimony about bullying, harassment and intimidation by medical colleagues in the hospital industry.

Fettke described how doctors and dietitians have taken to social media to attack him. He referred to a Facebook  “hate page” called Blocked by Pete Evans (BBPE). It started off attacking celebrity Paleo chef Evans but soon broadened into anything connected to LCHF.

DAA dietitians, a DAA spokesperson, nutrition academics, nurses, doctors and doctors’ wives comment regularly on it. As well, some BBPE admin fall under the AHPRA.

A GP on the page even tells Australian LCHF nutrition therapist Christine Cronau to “f …. off” and calls her a “moronic money-hungry charlatan”.

Many doctors in Australia are reluctant to go above the radar when criticising AHPRA for fear of retribution. However, in private they say that what goes on in Australian hospital corridors of power “wouldn’t be out of place in Nazi Germany”. That may not be far off the mark in effects on doctors’ careers, reputations and mental and physical health.

Fettke has described AHPRA’s action against him as “draconian”.

“It should be of concern to all health practitioners,” says Brukner. “We should be encouraging, not discouraging, doctors to give advice on lifestyle issues such as nutrition, exercise, sleep and stress management. These are the major causes of chronic diseases such as diabetes and cardiovascular disease.”

Brukner says that as an orthopaedic surgeon, Fettke sees “first-hand the ravaging effects of diabetes shown by the increasing numbers of amputations he is required to perform”.

AHPRA should applaud, not condemn, the fact that Fettke is actively counseling patients on the lifestyle factors that may lead to these chronic diseases.

“Surely it is best to try and prevent these chronic diseases rather than treat the dire consequences.”

Brukner is also convenor of Australia’s SugarByHalf campaign that Fettke supports. It aims to reduce Australian’s intake of added sugars by half. “This alone would have a massive impact on the health of this country.”

He says it’s “ironic” that (AHPRA’s) decision came in the same week as the Australian Medial Association released its obesity policy. That policy emphasises the importance of exercise and nutrition to reduce the current epidemic of obesity. Two-thirds of Australian adults and a quarter of Australian children are overweight or obese.

“The medical profession should be leading the way in advocating improved nutrition,” Brukner says.  “To say that doctors do not have the right to give nutrition advice is appalling.”

On the absence of an appeal process, Brukner says legislation should be “amended immediately” to allow every doctor to give nutrition advice.

The medical establishment globally has “a long-standing hatred of low carb”, Feinman says.  AHPRA is most likely afraid that people with diabetes will sue them and doctors for recommending the wrong diets.

“They are wrong and they know they are wrong,” Feinman says. To suggest that nutrition is so well-defined that AHPRA can say which doctors can and cannot advise on nutrition, is “absurd”.  So are its “facts” against Fettke.

“This is not a medical problem,” says Feinman, “it’s a political problem.

“It’s about whether the medical profession can accept failure and go beyond the low-fat idea that is now in dispute, or whether they will just keep doing the same thing,” he says.

By that “same thing”, Feinman means “repressing any alternative point of view”.

On his website, Scottish GP Dr Malcolm Kendrick, author of The Great Cholesterol Con,  says Fettke has suffered “the same fate as Tim Noakes”. That’s a reference to the Health Professions Council of SA (HPCSA) case against world-renowned scientist and University of Cape Town emeritus professor Tim Noakes for his views on LCHF. The HPCSA is the South African equivalent of Australia’s AHPRA.

Click here to read: NOAKES: ‘WHY I CHOOSE TO GO ON TRIAL’

Noakes can probably count himself lucky he is not living in Australia. The dietitian who first reported him to the HPCSA, Claire Julsing Strydom, may wish she were. That’s given the protection of anonymity AHPRA affords those who report doctors. AHPRA seems oblivious to the risk that raises of vexatious complainants.

It also seems oblivious of a common-law principle on which legal systems in democratic societies are premised world wide: that justice must not only be done, it must be seen to be done.

Kendrick says that in Australia “it seems that you can be accused, tried and found guilty without having any chance to defend yourself in person”. This is not a court of law, he says. AHPRA can strike doctors off the roll and for doctors, that’s a “gigantic punishment”.

AHPRA declined to respond via email and on Facebook to requests for clarification on Fettke’s case earlier this year.

DAA CEO Clare Hewett responded to Fettke’s submissions to the Senate inquiry on the Hansard website. It says it is the “peak body of nutrition and dietetic professionals in Australia”.

Its members are “independent professionals who are free to make a comment or a complaint within their scope of practice, without instruction or permission from DAA”.

It isn’t only medical experts who note the irony that  DAA expelled a registered dietitian, Jennifer Elliott, who recommends an LCHF diet for people with diabetes.

Belinda Fettke says that legal experts have described AHPRA’s action as a “star chamber”. That’s a reference to legal shenanigans English King Charles I indulged in to enforce unpopular political and ecclesiastical policies.

She calls the action a “gross miscarriage of natural justice and complete failure of fair process”.