Australian physician Dr Joe Kosterich is one of a growing and precious breed Down Under: a doctor with an open heart and mind. Like growing numbers of his colleagues, Kosterich is not in the thrall of drug or food companies. He doesn’t think he’s godlike. He doesn’t whip out a prescription pad every time he sees a patient.

Kosterich is more interested in health than in sickness.  He has done the unthinkable to more conventional orthodox doctors and dietitians in Australia. He has come out in support of a man they like to say is dangerous. There is even a Facebook page devoted to demonising and ridiculing this man. It was described as a hate page in an Australian government Senate Enquiry. It certainly has all the hallmarks of a hate page.

Doctors and dietitians who really should know better comment on the page in the most unsavoury, unprofessional way. Some use foul language to denigrate fellow health professionals. So who is this man they desperately want you to believe is Australia’s Public Health Enemy?  Read on to find out who the real threat to public health is in that country. – Marika Sboros

Recently I went to a “radical” presentation. The man who was presenting it has been described as dangerous and a threat to our health. Despite this, or maybe because of it, there were over 200 people in the room keen to hear his views.

Now I must warn readers that they read on at their own risk. The following is anathema to (Australian) dieticians, the  Heart Foundation and assorted others due to its heresy. They have castigated this man for his ideas and for daring to speak them in public.

For those of you reading on, fasten your seat belts as it is going to be scary!

The presenter suggested to the audience that it’s healthy to eat more vegetables, good-quality fats, and moderate meat consumption. He suggests that you cut out processed sugary foods, gluten and dairy. He recommends that you drink water in preference to fruit juice and soft drinks.

You can immediately see why he generates so much angst in health circles. Imagine if everyone ate more vegetables, drank water and cut out processed sugary foods. It’s hard to contemplate such a dangerous scenario, but give it your best shot.

There is a fascinating juxtaposition here with the (Dietitians Association of Australia) who are at loggerheads with this radical advice. 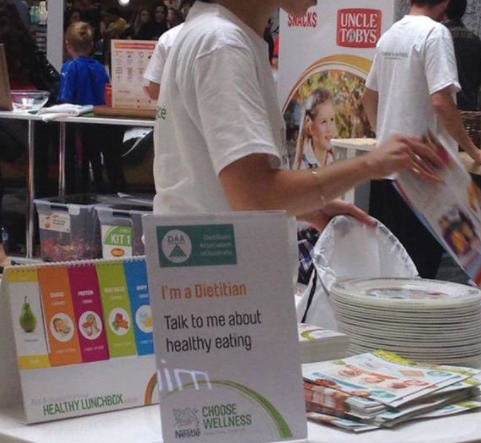 The previous day, dieticians were in a shopping centre promoting boxed breakfast cereal as part of a healthy diet.

Their stand had a sign inviting shoppers to talk to them about healthy eating. The maker of the breakfast cereal provides funding to the association.

In fairness, if you ate this cereal once a month  there really is not a problem. But it is not part of a nutritious diet. It is a sweet treat. Personally, I would prefer ice cream or a piece of cake but each to their own.

The people promoting boxed breakfast cereal are the same who class the man who promotes  eating more vegetables as dangerous.

They say you should avoid or ignore his advice. Even the President of the Australian Medical Association tweeted that people should not follow the man.

To complete the picture, this man also suggested cutting out grains and dairy. Personally, I don’t see the need to eliminate them completely. However, most of us would benefit from eating much less of them. Neither is essential in our diets.

No other animal drinks the milk of another. There is nothing in dairy or grains that we cannot get from other sources. This is where the food pyramid with grains at the base is so wrong.

So who is this radical person who dares question orthodoxy? Who dares to suggest that we eat more vegetables, good quality protein, good fats and drink water?

The man in question is (chef) Pete Evans and the diet he talks about is Paleo.

I will confess to not having known that much about paleo prior to hearing the presentation. However, any diet based on foods that till recently were moving around or growing somewhere is good for us. I wrote this in the original Do It Yourself Health.

There are many variations on the lower-carb, higher-fat diet. The names do not matter. The content of what you eat does.

Do you have to eliminate gluten and dairy totally to be healthy? For many, the answer will be no.

For everyone, eating more vegetables, good-quality protein and fats while eliminating or reducing processed foods is good.

Pete Evans and his approach to diet have attracted much criticism, some of it hysterical.

When you actually listen to what he suggests, this criticism is hard to fathom.