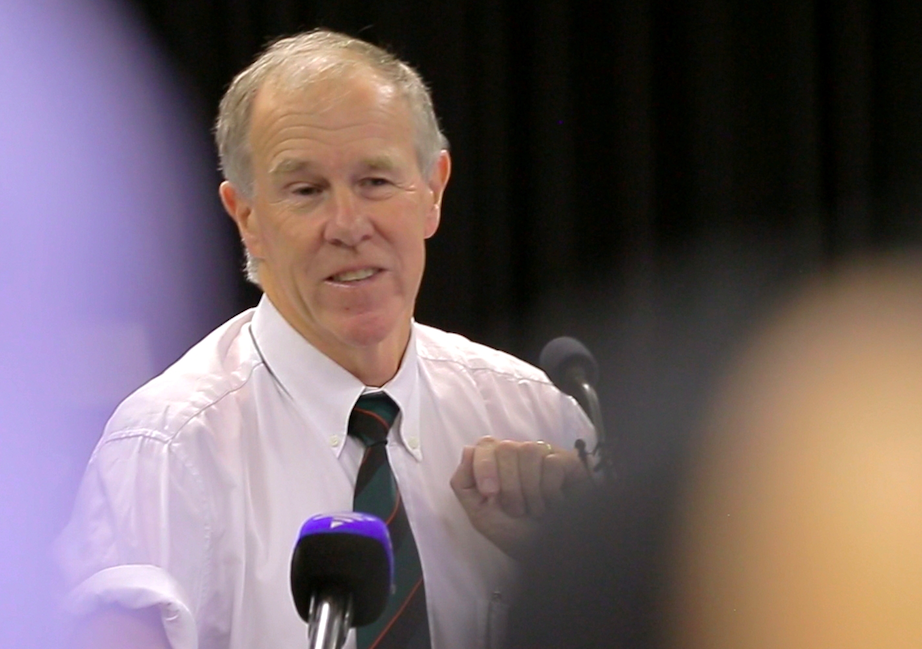 There was more drama, intrigue and “dogs that didn’t bark” on day one of the trial of South African scientist Prof Tim Noakes in Cape Town on October 17. Noakes resumed his evidence-in-chief and began to untangle what he believes the case against him is really about.

He also revealed just who he believes may be behind the Health Professions Council of SA (HPCSA) case against him.

For “DNA” proof, Noakes pointed one particular dog that “did not bark”. There were others. He fingered some usual suspects and more.

The dog reference is Arthur Conan Doyle’s classic Sherlock Holmes story. (Click here to read Silver Blaze.) As Noakes explained it, it is a metaphor for existence of “negative facts” in a puzzling case. In other words, it’s about the “absence of expected facts”.

The dogs that didn’t bark initially prevented him from seeing the “bigger picture” in the case against him and who was behind it, he said. Noakes led entertaining evidence laying out his theory of what and who are behind this trial.

The HPCSA has charged Noakes with “unprofessional conduct for giving unconventional advice in a single tweet to a breastfeeding mother on a social network (Twitter)”. On February 2014, he tweeted that good first foods for infant weaning are low-carb, high-fat (LCHF).

It’s common knowledge by now that his tweet “horrified’ Johannesburg dietitian Claire Julsing Strydom. She reported him to the HPCSA the next day for the tweet. Strydom was president of the Association for Dietetics in South Africa (ADSA) at the time.

Click here to read: The real beef dietitians have with him

Advocate Dr Ravin “Rocky” Ramdass asked Noakes if the HPCSA had ever given him guidelines for health professionals’ conduct on social media. Noakes said no and that to his knowledge “the HPCSA does not have any guidelines”.

Noakes then presented his first “negative fact”. In other words, the first dog that did not bark.  The breastfeeding mother involved in the case against him, Pippa Leenstra, had not given evidence at the hearing.

Who is the ‘wronged party’?

Leenstra was “technically the wronged party”, Noakes said. If his words had harmed her or her infant, she should have been the one to report him. The HPCSA’s own expert witnesses acknowledged freely that there was no harm to Leenstra or her infant.

(It later transpired that Leenstra wasn’t actually breastfeeding an infant a the time. That has led to speculation that the tweet was set up.) She also later submitted an affidavit saying that she had not followed the information in his tweet. After Strydom and another dietitian tweeted to her not to follow what Noakes had said, she tweeted: “Too much information.”

Leenstra has also described the case against him as “a circus”.

If the hearing were about his advice to her Twitter, Noakes said that Leenstra would have been making a lot of noise. Instead, her silence was “a telling negative fact”.

The second “negative fact” was that the HPCSA had charged Noakes with tweeting “unconventional advice” on breastfeeding.

Therefore, Noakes said that the HPCSA had charged him for something he didn’t do.

Click here to read:  Could cardiologists be at the heart of HPCSA trial of Noakes?

Noakes also said that he had always wondered why Strydom and ADSA were involved at all. Their involvement became clearer, he said, after publication of a study in the PLoS (Public Library of Science) One journal in July 2014.

The researchers are from two of South Africa’s top universities, the University of Cape Town (UCT)  and Stellenbosch University,

In effect, this paper became yet another dog that did not bark. Noakes said it was clear that the HPCSA had built its whole case around this study. It also happened to be “fundamentally flawed”.

His first expert witness, British obesity researcher, Dr Zoe Harcombe, would evidence on the flaws he said. Noakes also presented a slide showing some of the many errors. He said that it was only after he and Harcombe subjected the study to a “very thorough review” that the truth “popped out”.

It is titled Low carbohydrate versus isoenergetic balanced diets for reducing weight and cardiovascular risk: a systematic review and meta-analysis. It is a review of 19 studies, including randomised controlled trials (RCTs).

The study is known as “Naude Review”, after lead author Dr Celeste Naude of Stellenbosch University’s Centre for Evidence-based Health Care.  Co-authors include Dr Marjanne Senekal, associate professor of nutrition at the University of Cape Town. Senekal is now a consultant for the HPCSA against Noakes.  She is also co-author of the “UCT academics letter” to the media in 2014. In it, she and colleagues attack Noakes for making “outrageous and dangerous” unscientific claims about diet. (Click here to read the  academics letter and Noakes’ response.)

The study is actually a Stellenbosch-UCT-Cochrane Collaboration review.

In it, Naude and  co-authors conclude that:

Noakes presented evidence on instant media responses to the study from ADSA, the Heart and Stroke Foundation of SA (HSFSA), even the HPCSA’s own dietetics board and Stellenbosch university journalists. All quickly hailed Naude’s review as proof of the dangers of “Banting”, as LCHF is known in South Africa.

The HPCSA’s own witnesses, including Strydom, have said they waited for the study to be published before charging him. It bears mentioning that Strydom laid her complaint before the study was published.

Other academics were clearly also waiting  – and for an inordinately long time – before going after Noakes.

Noakes raised an article in the SAMJ (South African Medical Journal) by journalist Chris Bateman. It was on UCT’s Great Centenary Debate between Noakes and Prof Jacques Rossouw of the National Institute of Health (NIH) Women’s Health Initiative (WHI).

Rossouw is a critic of both LCHF and Noakes. He also has what Noakes and other researchers say is a dubious scientific distinction. Rossouw ended up spending more than $700 million funding trying and failing to prove that low-fat diets reduce the risk of heart disease in post-menopausal women.

Consequently, Noakes said, he was clearly not objective in this debate.

The HPCSA tried to call Rossouw as an expert witness against Noakes at its February 2016 hearing session. Rossouw initially agreed but failed to turn up on the day, citing difficulties getting permission from the NIH. Both the NIH and Rossouw declined to comment on he reasons for his absence.

Noakes raised evidence showing that other UCT professors, Krisela Steyn and Naomi (Dinky) Levitt, both ardent critics of Noakes and LCHF, were also waiting for the Naude Review.

That raised the question, he said, why it took so long for the researchers to publish their study. He suggested it was because their data did not show what they wanted it to show.

But the really big question around the study, Noakes said, was why the HPCSA used the Stellenbosch review at all. After all, it identified a third “negative effect”. The most important body of scientific evidence  Strydom, and the HPCSA have used to prosecute him, he said, was not about breastfeeding, weaning, children or infants. It was and always has been about low-carb, high-fat (LCHF) for adults.

Noakes presented a meta-analysis of the evidence published in the British Journal of Clinical Nutrition in 2013, that conflicts with Naude’s review.  He presented more current research, a joint Canadian-South African study published in the South African Medical Journal (SAMJ) in September 2016. Click here to read the full text of: A successful lifestyle intervention model replicated in diverse clinical settings.

Lead author of the Canadian study is South African-born Dr Stefan Du Toit who now works in remote rural areas of Canada. Noakes is third co-author.  On motivation behind the study, Du Toit has said:

“As a physician, you give prescriptions every month for chronic conditions and you don’t see any improvements in health. Actually, things tend to get worse over time.

“So we started to question: as physicians practising recommended guidelines, why aren’t we seeing desired improvements in health? Why is evidence-based medicine not working?

“We started these group-based lifestyle interventions with obese, pre-diabetic and diabetic patients. We tracked patient outcomes with the electronic medical record data -practice based evidence. What we found was  that participants’ health improved. They reduced their need for medication and their control improved. Then things took off from there.”

Medicine that ‘no longer cures’

This clearly was an important study even as critics were quick to knock it. It went straight to the heart of what’s wrong with  “evidence-based medicine”, Noakes said. Or as Du Toit and his researchers put it, medicine that “no longer cures”.

Therefore, a question all doctors should ask is: Why isn’t it working and what can we do better?”

They should also keep an ear out for scientific “dogs that don’t bark”.

The hearing continues in Cape Town until October 26.