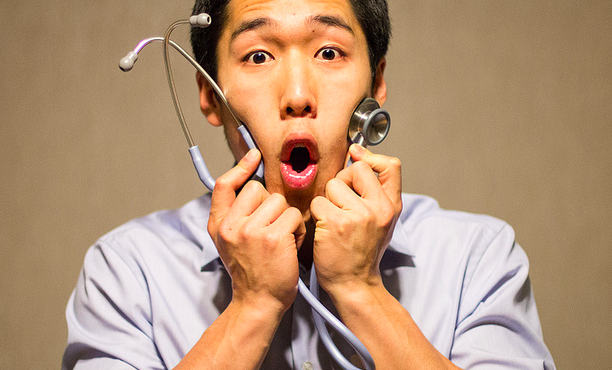 Here’s a fascinating blog that throws up an ethical dilemma for doctors, nurses and dietitians who dish out orthodox advice for type 1 diabetes.

The writer is Lemming Test-Pilot, the alter ego of a British GP who has type 1 diabetes. Last year, Lemming ditched “the almost impossible dark art of carbohydrate counting”, went on a low-carb, high-fat, ketogenic diet and survived. Actually, Lemming  hasn’t just survived but has thrived in body and mind. And has been running half marathons faster ever since, even after fasting.

Doctors and nurses told Lemming to go on the wrong diet for type 1 diabetes for 20 years. Lemming is understandably miffed about that but says with admirable restraint: “Any other condition managed with the wrong treatment for 20 years would rightly merit a lawsuit. The guideline advisers are getting knighthoods.” Here is Lemming’s remarkable, poignant, real-life story:

I have had type 1 diabetes for 20 years. I got it relatively late, in my 30’s. I’ve managed it the conventional way: 55% carbs, 30% fat mostly unsaturated, basal (long-acting) insulin, and DAFNE (Dose Adjustment For Normal Eating) with carbohydrate counting and injection of rapid acting insulin to balance the glucose.

I look after my weight and exercise regularly. I tried three types of statins at various doses but had to stop due to muscle pains and fatigue.

My blood pressure is OK and cholesterol reasonable in the 5’s. I have tried hard to manage my condition to the best of my ability and have followed the NICE guidelines and regularly attend for check-ups. My GP or Diabetes Nurse takes my measurements every year, makes some suggestions for improvement (there is always room for improvement) then leaves me to it for another year.

My GP team therefore manages me 0.2% of the year. I manage myself 99.8%.  Unless they have diabetes or are close to someone who has, clinicians would find it difficult to imagine what we diabetics go through on a daily basis.

For example, forgetting if we have taken our insulin doses. Running out of supplies. Eating out and forgetting insulin, or worse, injecting early and the food arrives late. Feeling hypo and having no glucose. Being drunk and not knowing if it is hypo or hangover. Re-using needles or injecting through clothes to be discrete. Constantly struggling to master the almost impossible dark art of carbohydrate counting.

Mini-hypos are not uncommon, but dangerous ones are rare. I have had hypos regularly for 20 years but I’ve only been caught out twice when I needed help. Both were due to my stupidity.

My medical team are really good and seem to understand me well. They have been looking after me for 20 years and I think the continuity of care has helped a lot.

But despite some of the best medical care in the world, I was not doing as well as I would have liked.  My HbA1c was been creeping up and my insulin doses were increasing. The thing was though, it really was not lack of effort. But the nuancing of the advice in my medical consultation made me think it might be.

Was I simply not trying hard enough (or was that just my paranoia)? No, I am beginning to understand that I, personally, have been on the wrong diet. And have been for 20 years. Any other condition managed with the wrong treatment for 20 years would rightly merit a lawsuit. The guideline advisers are getting knighthoods.

‘Any other condition managed with the wrong treatment for 20 years would rightly merit a lawsuit. The guideline advisers are getting knighthoods.’

Last year I decided to go on a ketogenic diet. Richard Bernstein convinced me a couple of years earlier, in his wonderful book, Dr Bernstein’s Diabetes Solution. He had type 1 diabetes for 20 years or so and had complications. Then he discovered the ketogenic diet and has not looked back. Most of his complications have resolved.  He has had type 1 diabetes for over 60 years and is fit and well.

I finally got round to implementing what I had read about this only last year. You see, I was getting desperate. I had had a few hypo crises, slightly more unannounced than before. Not unmanageable but I was needing to be more careful. They were a brooding shadow over my outdoor active lifestyle.

Worse, I was feeling old, with joint aches, general stiffness and generally fogged thought. Nothing specific, just below what I felt should be normal. I was also injecting higher doses of insulin with no improvement in control. Not a good place to be.

I turned to keto as a last throw of the dice. But it was difficult to reject the advice on fats and carbs that I had believed in for the previous 20 years of type 1 diabetes.

So now, 50% of my carbohydrate is refined sugar and I am in near permanent ketosis. Yep, I am taking the keto diet. Seriously, the diet only has 30-50g of carbs (recommended is 250g), but up to half of those are glucose tablets (refined sugar) to smooth out slightly low glucose levels I get from time to time.

I am still learning you see. But it is nothing really. The insulin doses have gone down by a third and with smaller doses of insulin and everything is smoothed out. Hypos are rare and the entry is so slow, I manage them easily.

I now feel good. Vital in fact, with a marked improvement in clarity of thinking and vision, gradually reducing weight, absence of joint pains and improved stamina.

To celebrate my feeling of well-being, I cycled the coast to coast route from Whitehaven to Sunderland with my son earlier in the year. This was my first serious trip on keto. It compared well to one done 10 years earlier on a conventional diet. In fact, it was easier.

My glucose control was exemplary and I could concentrate on enjoying the trip. It was on that trip that the idea of pushing the boundaries of my diet and insulin management for type 1 diabetes was hatched.

I have purchased a continuous glucose monitor and it has been a fantastic investment in my health. Expensive, sure, and out of range for a lot of budgets. But I can get four weeks out of a one-week sensor if I look after it, and have dismantled the sensor injecting device in the hope of reusing old sensors.

If I manage to recycle the sensor before the blog ends, I will pass on the method. This continuous monitoring just speeds up the learning about food and how it all affects the glucose levels. Exercise can be monitored and action

Exercise can be monitored and action taken early. Devices are getting cheaper so hopefully they will become more routine in future.

With a condition like type 1 diabetes, everyone must be so different. We are all at different stages and ages, using different diets, exercise and insulins. I reckon I have Latent Acquired Diabetes in Adulthood. Plus lately, I think that some type 2 has crept in.

I reckon I have Latent Acquired Diabetes in Adulthood. Plus, lately I think that some type 2 has crept in.

So let us all call it not type 1 diabetes or type 2, but Type Me.

Personally, using continuous monitoring, the biggest surprises are how exercise raises glucose and it remains at a plateau for at least an hour. It must be the cortisol, adrenaline and gluconeogenesis, the internal process whereby the body makes its own glucose.

But it was a surprise, to say the least.

And, if I get it right at night the glucose is totally flat at about 4 night after night. It is, of course, the glucagon. We hear about it but rarely consider it in practice. I think that is because we obsess about carbs and glucose. Carbohydrate counting and injecting can lead to dose escalation and swinging levels.

I would reckon that fluctuating doses of insulin steamroller any glucagon response.  It was not news to me, but confirmed that the minimum time of action of rapid acting was three and a half hours for me personally. I am pretty sure that the cause is insulin resistance after years of injecting insulin and compensating with carbs.

It is a constant juggling act as we all know, impossible to get perfect in my case. It is common to over-inject insulin because of inaccurate counting, or eat more carbohydrate to reduce the risk of hypo. Then to re-inject to bring down a high, and eat carbs to compensate for the resultant hypo.

I have made pretty well all the mistakes.  So I have caused the conditions for insulin resistance that one finds in type 2 diabetes: high insulin and high carbs.

Thankfully, after only a year of keto that insulin resistance seems to be reducing. I look forward to seeing how much more improvement I can get.

I am expecting that it will take a couple of years to become a black belt in keto. There is a lot to discover.  But worthwhile gains are early and dramatic and happen in weeks. It is only the refinement that takes more time.

It’s difficult to describe the amazement of eating all the guideline wrong things and seeing glucose control improve. And the clarity of thought, and the energy. That’s another thing: when people start keto, you just can’t shut them up!

There seems to come a point at which everything falls into place and one “gets it”. At that point, it is difficult to see how one could have believed there was any other way.  Then comes the exciting stuff: getting into real food and striving to perfect glucose levels. It is such a relief to actually feel in control. I have viewed diabetes monitoring at my yearly review as damage limitation.

Am I getting away with it? If my figures are bad, my diabetes team harangues (encourages) me for not being strict enough. But what do they know of the daily struggle? Could my nurse do better given the advice she is giving me?

They are a great team, and I am fortunate that they are dedicated to a diabetes dunce like me. But the more I read, the more obvious it becomes that keto is the best diet for me.

I have done just about everything to improve carbohydrate and insulin balance, eaten all of the “healthy balanced” foods for 20 years. In just one year doing almost exactly the opposite, I am in control and healthy. For the first time since diagnosis, I feel that I might have a chance.

So now it is time to have fun. Next:  Click here to read Lemming Test-Pilot on: Assessing the risks of a ketogenic diet.