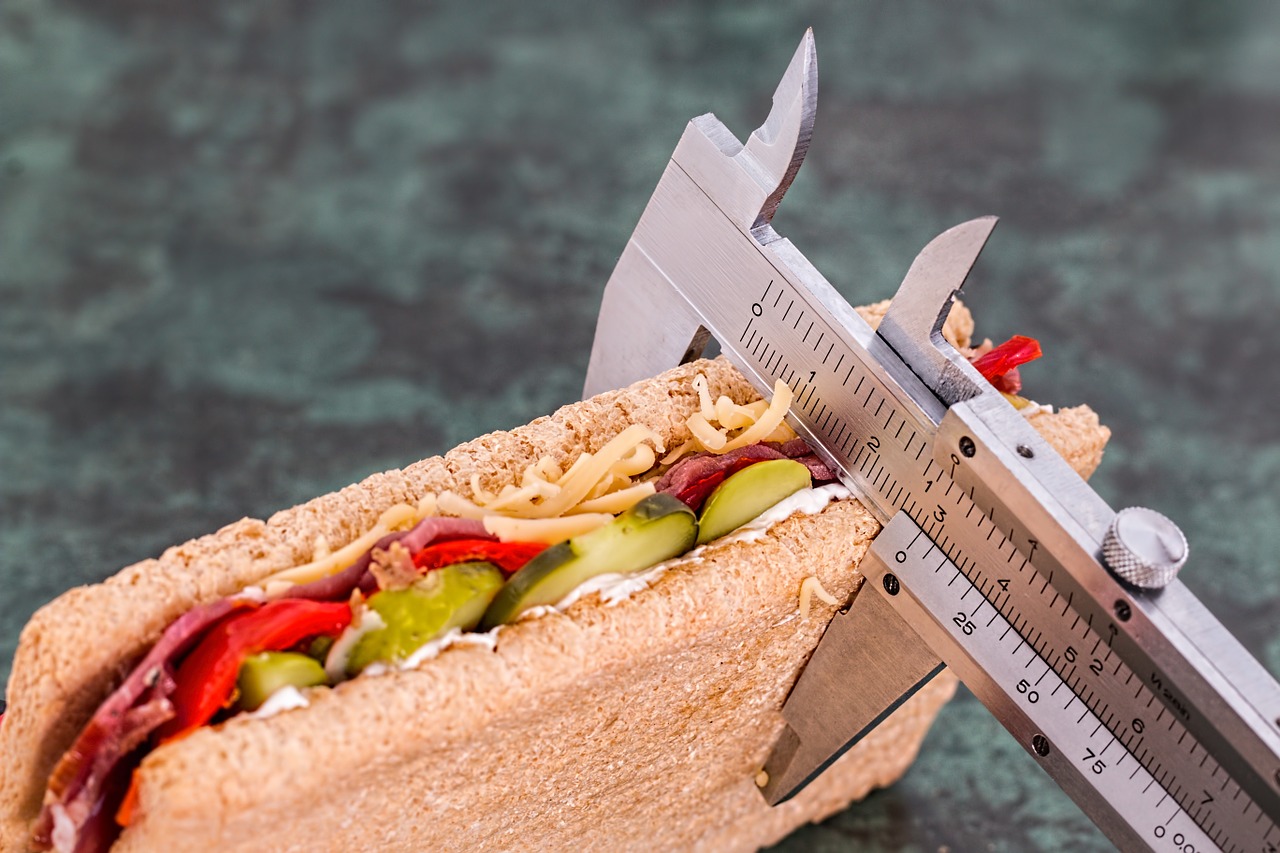 Governments, doctors and dietitians use dietary guidelines to dish up advice to you on what to eat and what not to eat. You’d expect that advice to be  evidence-based. Your expectations are not always realistic.

The US dietary guidelines are hugely influential. All English-speaking countries embraced the guidelines when the US government  launched them in 1977. These guidelines were without much solid science to back them up then. They remain so today.

Here,  in Part 1 of a 2-part series, US physician  Dr Michael Eades explains why the dietary guidelines are making us all fatter and sicker. It’s a sobering read. – Marika Sboros

As we know all too well there has been an explosion in the incidence of obesity and type II diabetes over the past 30 to 40 years. Depending upon the bias involved, many people have opined on the cause of this sudden departure from previously fairly stable obesity rates.

People who believe the caloric theory of obesity – CICO (calories in vs calories out) – tend to believe the increase in obesity is simply from  people eating more than they used to.

Those of a conspiratorial bent believe Big Food has made its spawn-of-the-devil products so tasty and addictive you can’t avoid them.

Those believing the carbohydrate-insulin theory of obesity posit that increased dietary carbs since the late 1970s is the driver.

All of these groups have data to back up their beliefs.

To realise how much obesity there is out there, look at an old movie or an old TV show. Rent Dirty Harry (which I did not long ago) and watch it for a few minutes.

All the people look like stick people compared to people we see today. The contrast is startling.

Or Google Woodstock and look at the images of all the folks there in 1969.

Granted most are young people, but compare them to young people today on college campuses. Although there are a few mildly overweight kids sprinkled here and there, most look like stick figures compared to today’s college students.

Why has this happened to us? 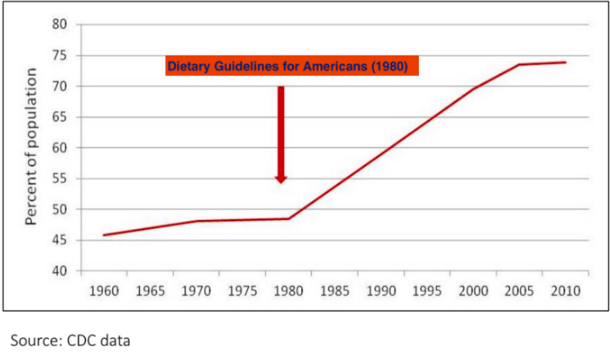 The chart shown right is from the dietdoctor.com site. It makes it clear something happened circa 1980 that tripped the obesity trigger.

Despite a multitude of theories, there’s agreement that something triggered the obesity trigger.

Macronutrient intake changes in US

If you look at graphs of changes in food consumption from the 1970s till now, you’ll notice a few things.

First, overall calories have gone up by around a little over 300 per day. Second, although fat consumption has remained about the same, the percent of fat consumption compared to total calories has fallen. Third, the amount of sugar in the diet has increased slightly. Fourth, the quality of the sugar has changed and become more fructose-laden.

And fifth, as we’ll discuss shortly, the type of fat has changed. Saturated fat consumption has declined while polyunsaturated fats – ie, vegetable oils – has increased markedly. Importantly, most of the ~350 calorie increase has been made up of carbohydrate. 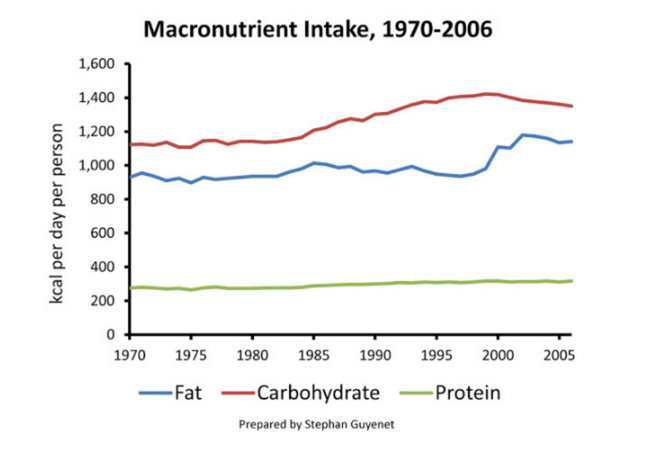 Stephen Guyenet, who created the chart, left, is no believer in the carb-insulin hypothesis. He  calculates the composition of these extra calories as follows: 65% of the increase in calories can be attributed to carbohydrate, 24%  to fat,  11% to protein.

These diverse changes in diet since 1970 allow people to hang onto their pet theories. The CICOers say it’s all because people are eating more. The anti-sugar people point to the increase in sugar. Those against fructose point to that.

The low-carbers point to the fall-off in fat consumption and increase in carb consumption as the driver of all the obesity.

As you might imagine, my bias falls in with the notion that  increased carbs are a major force in hugely increased obesity rates. You might be surprised to learn that I’ve always had a little niggling doubt that carbs alone were the cause.

Why? Because of observations I’ve made over the course of my life.

When I was a kid growing up in the rural Ozark Mountains, everyone I knew ate sugar. A lot of it. Everyone, and I mean everyone, ate bread at every meal. As far as people then were concerned, it really was the staff of life. Same with potatoes, though they weren’t eaten at every meal.

People celebrated holidays and get-togethers with pies, cakes, cookies, brownies, cupcakes, etc. Most folks started their day with a bowl (or two or three) of hot or cold cereal with milk and sugar on it.

I watched my grandfather eat his breakfast every day while I was eating my cereal and toast. He started off with a big glass of prune juice – which I can’t abide to this day – for regularity. Then he broke into small bits two pieces of buttered toast and put them into a big glass of buttermilk. He threw a few spoonfuls of sugar on top, then mashed the whole thing around and ate it. He finished off with a cup of black coffee.

Other than the coffee, it was not exactly a low-carb breakfast. But he was thin, as was most everyone at that time.

Other than the handful who were overweight at that time, people pretty much gave no thought to what they ate, other than how much they enjoyed it.

I suspect the small percentage of overweight peopleback then were the group obesity researchers of the time fingered as carbohydrate-sensitive. (These are the researchers Gary Taubes wrote about in Good Calories, Bad Calories and Why We Get Fat.)

So, how did the majority of people back then eat sugar, bread, cakes, cookies, pies and potatoes and not get fat, while people today watch every carb and/or calorie and struggle?

I’ve always wondered what the change was that took place back at the inflection point in the graph at the top. Sure, we started eating more carbs then, but what else? I’ve had my suspicions that there was something else.

Before I reveal what I think the cause is, I have to say I always hate it when researchers consider people in the abstract. People aren’t abstractions; they are individuals. When we say people are eating an extra 350 calories per day today as compared with 1970, that’s an abstraction.

The reality is some people are eating 1000 calories extra while others are eating, say, 200 fewer calories than they did in 1970. I am one of those who eat fewer calories now than I did in 1970 when I was thin and exercised almost no restraint. So, why do I always have to watch what I eat? I should be lighter than I was in 1970, not heavier. Which I am, by about 10 pounds. What’s the difference in my behaviour now vs then?

Let’s look at another couple of trends besides just the caloric differences. 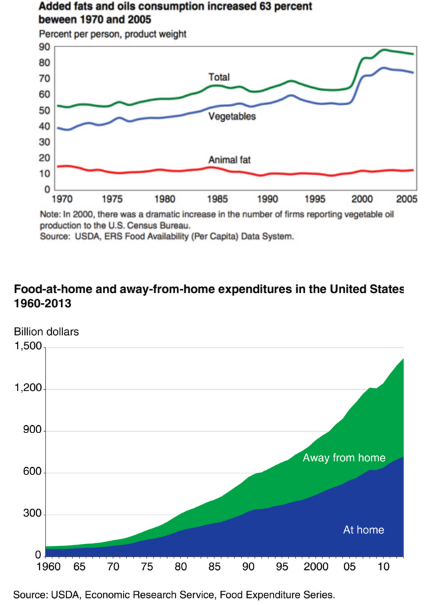 As you can see from the charts (right), a couple of major changes have taken place besides just an increase in calories, 65%  of which are from carbohydrate.

First, although overall fat consumption hasn’t risen by much, there has been a dramatic change in the type of fat we’ve been eating. Which to a CICOer doesn’t mean squat. Calories are calories irrespective of where they come from. In my view, as I’ll discuss shortly, this is a big mistake.

Second, we’ve been consuming more and more of our meals away from home since 1970. In other words, we’ve been relying on people who run restaurants to determine the fats we eat.

Having been in the restaurant business and having many friends in the biz, I can tell you most restaurants use shelf-stable crappy oils for just about everything.

When you dine out and get a steak, salad and sautéed vegetables, you don’t have a clue how much vegetable oil you’re getting. I, myself, am a victim of this frequently because I, like most people, eat out a lot.

When I was a kid, we always ate all of our meals at home. We never, and I mean never, went out for dinner. Or had takeout. My own kids eat out or have take out vastly more often than they cook at home.

Why does this matter?

Because we all get more vegetable (seed) oils than we should. Why does that matter?

That question leads me to the heart of this post:  (Click here to read the full version of this post and importance of the FADH2 to NADH ratio. )