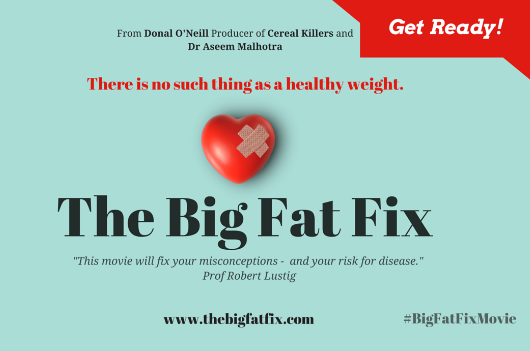 How delicious and cool is this! British cardiologist Dr Aseem Malhotra’s new movie, The Big Fat Fix, premiered at Westminster to MPs on July 21. It is available to the public from today on the film’s website.

The Big Fat Fix is an independent co-production between Malhotra and former international athlete Donal O’Neill, producer of Cereal Killers (2013) and Run on Fat (2015).

It is a paean of praise to the Mediterranean diet – but only … in its high-fat incarnations. Malhotra does not so much advocate for high saturated fat as for oodles of high-quality healthy fats, including saturated. He certainly isn’t saturated fat phobic, as so many of his colleagues still are.

The Big Fat Fix is a remarkable movie. It gives bite-sized looks at food as medicine and diet and lifestyle in disease treatment and prevention. It spills the beans on misconceptions and vested interests behind global obesity and diabetes epidemics.

Were he alive today, ancient Greek sage Hippocrates would have been in the audience at Westminster. Who knows. He may even have been a consultant on the movie. Hippocrates’ exhortation to followers to “let food be your medicine” is a leitmotif in this groundbreaking film.

Ultimately, The Big Fat Fix is a visual feast of another powerful maxim: “The food you eat can either be the safest and most powerful form of medicine or the slowest form of poison.”

O’Neill met Malhotra for the first time at the London premiere of Cereal Killers  in 2013. He says Malhotra “had single-handedly gathered the great and the good to attend and view a movie made by someone he had never met. I wondered what drove him to do that.”

Now he knows what drives Malhotra.

O’Neill calls Malhotra “a figure for the future of healthcare”. That’s compared with American Dr Ancel Keys who O’Neill calls a “giant of nutrition past”. History hasn’t been that kind that.

Many now consider Keys something of a monster in the past moment. Keys is responsible for the diet-heart hypothesis that says fat in the food equals fat in the diet.

The diet-heart hypothesis underpins the influential US dietary guidelines that most English-speaking countries follow. Experts say the guidelines have contributed significantly to global epidemics of obesity and diabetes. It’s not a message the food and drug industries like to hear.

O’Neill decided to trace Keys’ footsteps and investigate his legacy. The journey took him to a forgotten Italian village where he uncovered the “true secrets of the Mediterranean Diet”.

The Big Fat Fix is the story of the hidden lifestyle treasures he and Malhotra have uncovered. It is Malhotra’s powerful prescription for a “long, lean, healthy and happy life”.

O’Niall and Malhotra financed the film wholly through a Kickstarter crowdfunding campaign. Malhotra is rightly proud to say the film’s content is “100% free from any commercial influence”.

They chose this route, they say, to protect the integrity of their “lifestyle as medicine” message. Their uncompromising stance lays a foundation for “a global movement to influence and mobilise change through political, medical and thought leaders”.

A good read: NOAKES: THE IDIOT’S GUIDE TO LCHF AND BANTING

That movement began in earnest on July 21 with The Big Fat Fix Worldwide Premiere Screening to British MPs. The host was the Rt Hon Keith Vaz, Chairman of the Parliamentary All Party Diabetes Group.

The goal now  is to “lobby hard and replicate this approach”, Malhotra says  A second European country has already expressed interest in their own Parliamentary screening. There are plans to translate the film into more than 50 languages.

If all else fails and should science pop up to prove him wrong, Malhotra can give up his day job and go into acting. He has the looks and the camera loves him.