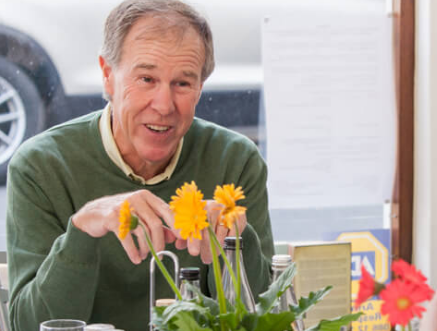 Here’s a sobering thought: many doctors and dietitians make diabetes life-threatening when it doesn’t have to be. They do that by giving the wrong dietary advice, says University of Cape Town emeritus professor Tim Noakes. To counter that, he  has set up The Noakes Foundation to do independent research into issues that include diabetes.

Here, Noakes, a medical doctor and nutrition specialist, looks at why conventional medical and dietetic advice on diabetes is likely to be  wrong. For starters, he shows why it has little if any science to back it up. Along the way, he shows why diabetes may turn out to be the most egregious example yet of iatrogenic (doctor-caused) disease. – Marika Sboros

My interest in the dietary management of diabetes stems from watching my father’s rapid downward physical decent in the years after he was diagnosed with Type 2 diabetes mellitus (T2DM); the diagnosis of T2DM in myself; and my reading of the “alternative” literature which convinces me that T2DM does not have to be an inevitably progressive disease:

My conclusion is that unlike my father, it is not my pre-ordained fate to die from the final common pathway in fatal T2DM – disseminated obstructive arterial disease. But to achieve that I will have to ignore what I was taught and which, in turn, I have conveyed to two generations of students:

So to prevent the development of the disseminated obstructive arterial disease of T2DM, I will have to follow dietary practices that are the polar opposite of those my father was advised to adopt and which hastened his death; advice that I personally practised for 33 years and which ultimately caused me also to develop T2DM.

How could I have been so wrong? An article in the July 2016 issue of the magazine, Longevity, identifies the intellectual source of my errors.

The article was written by a “nutrition expert”. It seeks to explain why “foods that are minimally processed, such as starch that needs cooking, should provide most of the diabetic’s fuel for energy” (p. 44).  The evidence is that “nutrients that increase the risk of diabetes are excess calories, high-GI/GL diets, animal fat and heme-iron (from meat). Nutrients that decrease the risk of developing diabetes are total fibre, cereal fibre, low GI/GL diets, plant-based foods, magnesium and vitamin D”.

As a result, foods that are “out” for diabetics are “high-protein intakes (more than 120-150g protein per day), red meat (unprocessed meat increases risk by 19% and processed meat by 51%), eggs (five to six eggs per day), white rice and sugar-sweetened beverages.  Individual foods that decrease the diabetes risk are dairy, green leafy vegetables, whole grains (three portions per day), moderate alcohol and moderate coffee” (p 45).

Must read: LOW-CARB WORKS FOR DIABETES – WHY DON’T MORE DOCTORS ADVISE IT?

The problem with this advice is that it has no basis in hard science; it is a best guess based on studies that are too flawed to allow any firm conclusions.  And certainly none good enough to tackle the one disease that poses the single greatest threat to the future of medicine as we currently understand it.

To prove that each of these nutrients either causes or prevents T2DM would require at least 20 different 40-year studies in which we compared two groups of identical humans, all the members of the one group who eat the nutrient of interest in the correct amounts whilst all members of the other group do not. No other difference in any behaviour would be allowed between the 2 groups in our 20 separate studies.  At the end of 40 years we would be able to determine which of those 20 nutrients, if any, either caused T2DM to be more or less prevalent in our tested groups.

So to prove that, for example, 5 or 6  eggs a day causes T2DM whereas fewer than 5 does not (the inference from this statement), would require a 40 year study in which we compared two groups of identical humans, all the members of the one group ate “5 or 6” eggs a day, the other group’s members fewer than 5 eggs a day.  Key is that the only allowed difference between the two groups must be the number of eggs eaten per day; nothing else may differ.

We call this a randomized controlled trial (RCT). Ideally, our RCT would require us to admit the two groups to jail to ensure that we can control everything in their lives (including how many eggs they each eat each day; how much exercise they do each day; whether or not they marry; how much they sleep each night etc etc etc).  Unfortunately there is no other way to prove beyond a reasonable doubt that a single particular foodstuff is the direct and sole cause of a specific medical condition.

Another view: DIABETES CAN BE CURED! A DOCTOR’S PERSONAL JOURNEY

Realizing that such studies are essentially impossible, influential US scientists directing research funding in the 1970s decided on a convenient scientific short cut. They agreed that, to save costs and allow the nutrition sciences to progress, they would in future accept findings from less rigorous research designs as valid “proof” of causation.

So instead for the past 40 years, the nutrition sciences have been swamped by the cheaper alternative – observational (associational) studies (not experiments) that require only that specific populations be observed for decades as they go about their normal lives (without any experimental intervention).

During their lives, the foods that each research subject eats is recorded on the assumption that this is an accurate measure of what each ate for the full duration of the study. Then the diseases that each participant develops during life are recorded with particular interest on when and why they died.  The nutritional data are then analysed to discover exactly which nutrients were eaten in excess by those who died from specific diseases. 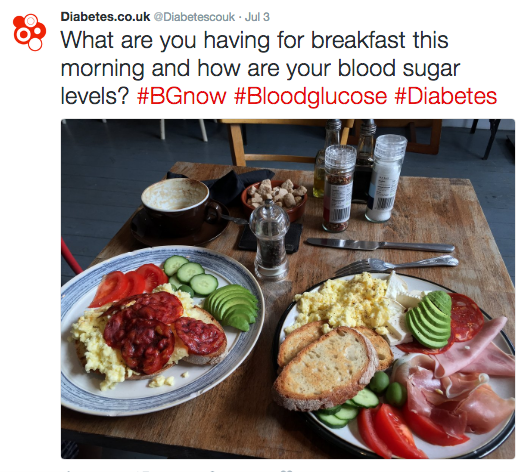 But if this core assumption is untrue, the method will likely cause us to draw false conclusions. With potentially devastating consequences.

But the real limitation of this experimental method is that, because it cannot exclude what we term “selection bias”, it can never prove that a single nutrient causes a specific disease. Selection bias means simply that the single nutrient that one wishes to study – for example eating less than 5 eggs a day – can never be isolated from other behaviours and choices that co-exist in persons who choose to eat less (or more) than 5 eggs a day.

Simply put a person eating 6 eggs a day is likely to be unusual in many ways other than just her devotion to eating eggs.  And as a result of her egg addiction, what foods does she choose to avoid and how might that choice of avoidance also influence her long-term health?

For the evidence clearly establishes that healthy people make a range of healthy choices – they tend to eat the diet that they are told is healthy; they exercise regularly and they avoid smoking and excessive weight gain.  How is one ever to know if their health is the result of their exercising and avoidance of weight gain and smoking, rather than their choice to avoid eating a particular nutrient in excess? Indeed it is not impossible that their “healthy” diet might actually be unhealthy, if this harmful effect is obscured by the overriding benefits of exercise, leanness and not smoking.

The point is that we cannot continue to justify giving dietary advice based solely on the findings only from longitudinal associational studies that cannot prove causation.  Especially when the more vigorously we have championed that advice, the more rapidly has the obesity/T2DM epidemic grown into a global pandemic.

Indeed I argue that the very reason we are facing an uncontrollable global diabetes/obesity pandemic at the moment, is because we have promoted dietary guidelines that are based solely on “evidence” from associational studies without acknowledging that RCTs have either not supported those conclusions or might have actively disproved them.

The solution in my mind is that we need to give dietary advice to persons with diabetes, T2DM especially, based on our understanding of the underlying patho-physiology of the condition, not on false information provided by associational epidemiological studies that are unable to prove causation.  I suggest that we know a number of features of the abnormal biology of T2DM with absolutely certainty. And these are:

1.  Persons with T2DM are intolerant of carbohydrate.  Thus it makes sense to restrict their dietary carbohydrate intakes as much as possible. 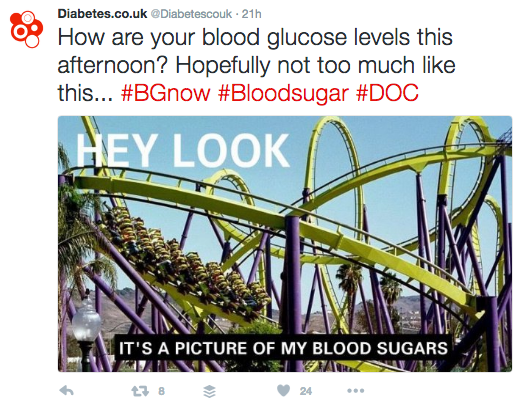 2.  Persons with T2DM are intolerant of carbohydrates because they have insulin resistance. Which requires that they continually over-secrete insulin in response to carbohydrate (and to a lesser extent protein ingestion). Thus T2DM is a disease of insulin excess (hyperinsulinaemia). The multitude of complications that develop in this condition, most especially the obstructive arterial disease, are a result of this hyperinsulinaemia (and associated non-alcoholic fatty liver disease – NAFLD).

4. Thus the goal of treatment in T2DM (as in Type I diabetes mellitus (T1DM)) must be to minimize the use of insulin, either secreted internally or injected. Dietary intervention in the form of a very restricted carbohydrate intake with a moderate protein intake and a high intake of healthy fats will minimize insulin secretion and reduce hyperinsulinaemia. This is the type of diet that was used in all children with T1DM before the discovery of insulin in the early 1920s.

5. Of the three dietary macronutrients, only dietary carbohydrates are non-essential. Thus it is established that the minimal daily dietary requirement for carbohydrate is zero grams per day.

6. Even in persons with T2DM eating 25-50g carbohydrate/day, the liver produces an excess of glucose (from protein and fat).  As a result blood glucose concentrations are elevated in T2DM – one of the diagnostic hallmark features of the disease. 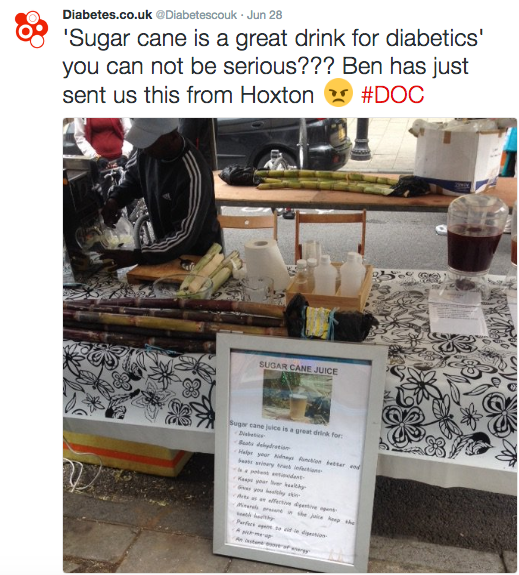 7. The statement that glucose is the sole fuel for human brain activity is false – the brain has a great capacity to use alternate fuels, both ketones and lactate for its energy needs. The corollary that persons with T2DM must eat carbohydrates to insure adequate brain function is also false. In fact brain glucose uptake is already maximal at a blood glucose concentration of 1.5mmol/L whereas blood glucose concentrations even in T2DM patients eating 25-50g carbohydrate/day is seldom less than 5mmol/L.

8. Both in healthy normals and in persons with T2DM, the single most important determinant of the blood glucose concentration and especially the rise after meals, including the rise in blood insulin concentrations, is the amount of glucose delivered from the gut. Which in turn is a direct function of the amount of carbohydrate that is ingested.

9. Thus it makes absolute sense that the crucial intervention to regulate blood glucose (and insulin) concentrations in persons with T2DM, is to limit the amount of carbohydrate they are advised/allowed to eat. Intermittent fasting is another technique to insure that blood insulin concentrations remain low.

10. My father did not die (nor will I) because his brain was not receiving enough glucose. He died because he developed disseminated obstructive arterial disease. Thus the prevention of the fatal complications in T2DM requires that we understand what causes arterial disease in T2DM.

11. The arterial damage that occurs in T2DM is due to a continual state of hyperinsulinaemia associated with abnormalities in blood glucose and lipid concentrations, the latter caused by NAFLD. The key blood markers of this atherogenic dyslipidaemia are the following:

12. All these markers are worsened by high carbohydrate diets and improved by diets high in healthy fats and extremely low in carbohydrates (~25g carbohydrate/day).

Thus it seems clear to me what diets we who have T2DM should be following. It surely is not rocket-science! On the basis of this hard scientific evidence, I have made my choice.  But I am always open to modification, should new information, based on credible scientific evidence from appropriately robust scientific methods, show there is an even better way.