Is there really such a thing as sugar addiction? What about carb addiction? Some scientists say it’s hype and marketing. Others say it’s real.

UK consultant cardiologist Dr Aseem Malhotra says sugar is “the single most important dietary factor contributing to a worldwide epidemic of obesity and type 2 diabetes”. Malhotra has written a foreword to the  revised UK edition of the best-selling Sugar Free – 8 Weeks to Freedom from Sugar and Carb Addiction (Robinson). The author is recovered sugar addict Karen Thomson. It’s a riveting read. If you still harbour any doubt that sugar addiction is real, this book dispels it:

The book has an introduction by  University of Cape Town emeritus professor Dr Tim Noakes, and a chapter by  US research neuroscientist Dr Nicole Avena. Those are heavyweight endorsements. However, the book’s most compelling power is Thomson’s personal experience. She documents what it took overcome addiction to alcohol and cocaine and then to another “pure, white and deadly” powder – sugar.

Malhotra enjoys a reputation as Britain’s most outspoken cardiologist on optimum diet. That’s not just for health and to treat and beat heart disease but other epidemics currently plaguing the planet, including obesity and diabetes. He is successfully leading the campaign against excess sugar consumption in the UK.

Noakes is a pioneer in South Africa of low-carb, high-fat (LCHF) eating regimens to beat and prevent those epidemics. He continues to challenge conventional medical and dietetic “wisdom” and especially official dietary guidelines. He and other experts internationally say the guidelines are probably “the biggest mistake in modern medical history”. 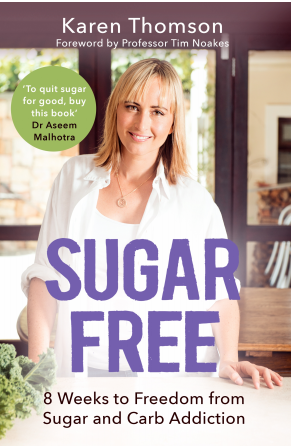 Avena  is an acknowledged authority in nutrition, diet and addiction. She is also author of  the best-selling Why Diets Fail (Because You’re Addicted to Sugar): Science Explains How to End Cravings, Lose Weight, and Get Healthy (Ten Speed Press).

In his foreword to Sugar Free, Malhotra doesn’t say one teaspoon of sugar will kill you, just as one cigarette won’t. He says excess consumption of sugar over time “has the most devastating effect on our bodies”.

He says we are now witnessing the consequences of that consumption “on an epic scale”. Added sugar  in various forms in almost 80% of all processed foods is driving it. As a result, sensitivity to sugar has gone down. And as any addict knows, this leads to “craving and consuming more and more”.

Sugar is “not evil in itself”, Malhotra says, but there’s no doubt that life is “a lot better without it”.

Not surprisingly, he is a vocal proponent of prevention rather than cure. Rather than save people from drowning, “it’s better they’re not thrown into the river in the first place”, he says. Thomson’s book is one way of stopping people from throwing themselves into that sweet raging  river.

Addiction is a disease, Thomson writes. Regardless of the  “drug of choice”, it “eats away at our freedom of choice and wellbeing”.  She believes sugar is an even more dangerous drug of choice. It is difficult to overcome because it is “socially acceptable and legal”.

Avena and registered dietitian Kristen Criscitelli explain the brain’s mechanisms of action that make sugar and carb addiction real. They aren’t saying that everyone who eats sugar and other carbs will become an addict. They are saying that addiction is a multifaceted disorder. Different factors cause it, including biology, environment and even culture.

Sugar’s contribution to chronic disease and obesity is more sinister than just providing “empty calories” as was once thought, they say.

Must read!  NOAKES: THE IDIOT’S GUIDE TO LCHF AND BANTING

The evidence is strong but they say there’s no reason to wait for more proof of sugar’s detrimental effects before eating less.

Thomson gives tools to help beat the “elephant in the kitchen”. It begins with a simple questionnaire to help you identify whether you really do have sugar addiction. Questions include whether you:

Noakes says when people fully understand the messages in Thomson’s book, they will “better appreciate the probable role of sugar addiction in the modern global epidemics of obesity and diabetes”.  He describes those twin epidemics as “the greatest challenges to human health ever”.

Unless we understand how sugar influences appetites and food choices, Noakes says, it is unlikely we will ever  reverse them.  We don’t know the true extent to which sugar addiction impairs the health of the world’s population. However, it’s likely to be “a greater order of magnitude than we currently appreciate”.

Thomson acknowledges it’s hard for many people to admit an addiction to sugar.  She runs the Sugar Free Revolution website for ongoing support. Living a life in recovery from that addiction gives people a “life beyond their wildest expectations”.