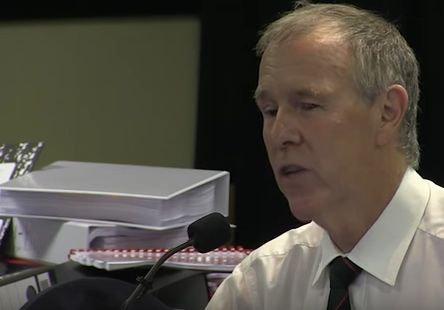 First  you become fat, then you develop insulin resistance, right? Probably not. South African scientist Prof Tim Noakes has been researching ketosis since the 1980s. In Part 2 of a series of videos of his evidence in chief at the Health Professions Council of SA (HPCSA) hearing against him in February, Noakes gives a Ketosis 101 lecture. He presents compelling research to show why he is innocent of the charge of unprofessional conduct.

But isn’t ketosis dangerous? You might well ask since many doctors and dietitian still believe it is. Here is another view:

Noakes is facing a charge of unprofessional conduct for two tweets to a breastfeeding mother in which he said good first foods for infant weaning are low-carb, high-fat (LCHF). He has been accused of promoting ketosis for babies.

Although ketosis doesn’t appear on the charge sheet, it has featured prominently in the hearing against him. All the HPCSA witnesses referred throughout to ketosis. They suggested that Noakes was unprofessional in suggesting LCHF foods, because those foods would put the infant into ketosis.

Must read!  NOAKES ‘TRIAL OF 21ST CENTURY’: THE EVIDENCE

They all appeared to conflate ketosis not just with LCHF. It is at one end of a spectrum of LCHF eating. It is very different from ketoacidosis, a deadly condition seen mostly in type 1 diabetics who make no insulin at all.

They appeared not to know that ketosis is a perfectly benign metabolic condition in which the body uses fat instead of glucose as an energy source.

In the next two videos below, Noakes gives a Ketosis 101. It’s a fascinating lecture on the basics and benefits of ketosis – or “nutritional ketosis” as LCHF experts call it these days to distinguish it from ketoacidosis that can kill. Along the way, he gives insight into the source of unfounded fears of ketosis. He says it’s simply from ignorance of body chemistry.