For her birthday in May 2016, American journalist and author Nina Teicholz has a brilliant idea. Buy her bestselling The Big Fat Surprise as a present for you or someone you love

Better still, buy it from the Hickory Stick Book Shop.  It’s an independent US bookstore located in Washington Depot, Connecticut, for more than 60 years.  Teicholz will sign and dedicate the book.

I couldn’t think of a better investment in health right now.

The book was a game-changer in nutrition science in May 2014. It continues to make waves in medical and dietetic quarters as its second birthday rolls around. It reveals the truly “unthinkable”:

That everything you thought you knew about dietary fats is most likely wrong. And that it’s not your fault that you got it wrong.

Teicholz documents with disturbing scientific accuracy the effects of decades of low-fat nutrition advice.  She shows how it became “a vast uncontrolled experiment on the entire population (in the US and globally)”. And how the consequences for health globally have been “disastrous”. 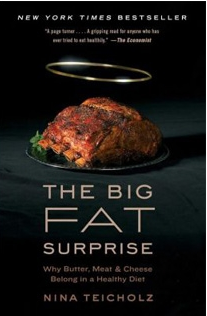 He begins with a quote by French-American Dr Jean Mayer, The quote is in what Smith calls “colourful language that has characterised arguments over diet”. Mayer said that prescribing a diet restricted in carbohydrates to the public was “the equivalent of mass murder”.

Smith had a different view after ploughing through five books on diet. Experts can direct the same accusation of “mass murder” at “many players in the great diet game”, he said.

In short, he said, experts have based bold policies on “fragile science”. And the long-term results “may be terrible”.

What do those latter sentiments have to do with Teicholz’s book? Everything, including the effects of prescribing high-carb diets to the public.

After more than 40 years of official high-carb, low-fat dietary advice, there are global epidemics of life-threatening diseases. These include obesity, diabetes, heart disease, cancer, even dementia. Doctors now call dementia type 3 diabetes because of its proven links with diet.

Smith found The Big Fat Surprise to be by far the best of the five books he read to write the BMJ article. Teicholz has made a “forensic demolition of the hypothesis that saturated fat is the cause of cardiovascular disease”, he says.

He found the book “deeply disturbing”, one that “shook” him.

Over 40 years, Smith says that he now recognises what he might always have known:  “Science is a human activity.” It is fraught with “error, self-deception, grandiosity, bias, self-interest, cruelty, fraud, and theft”.  All these are “inherent in all human activities (together with some saintliness)”.

Other specialist reviewers are similarly fulsome in praise of The Big Fat Surprise.

In the American Journal of Clinical Nutrition in 2015,  Dr Donald McNamara says that every nutrition science professional should read it. It’s “a guide to risks of hubris and the unquestioning belief in whatever the conventional wisdom of the day is”.

McNamara is a fellow of the American Heart Association and the American College of Nutrition. He has also done extensive research in coronary heart disease, cholesterol and lipid metabolism.

Teicholz exposes the consequences of basing public policy “on belief as opposed to evidence of positive, beneficial effects”, he says. That’s the risk when experts set aside the “basic tenets of science, scepticism, and consistent questioning”.

And when they do so to “appease the powerful voices convinced that we must do something”. That’s the case, McNamara says, “even if we do not have the proof that something is the right something”.

In June 2014, the Wall Street Journal called the book “a lacerating indictment of Big Public Health”.The WSJ gave The Big Fat Surprise their highest accolade as one of their Top 10 NonFiction of 2014. Forbes magazine named it the Most Memorable HealthCare Book of 2014.

The Economist rated it their Best Book of 2014. It quickly became a New York Times best-seller.

US physician Dr Michael Eades has written a detailed review of Teicholz’s book on his Protein Power website.  (Scroll down for a link to the full review).

Eades calls it one of the most important books on nutrition ever written. It is “so brimming with valuable information”, he says, that he had difficulty trying to figure out which parts to excerpt. And once he started reading it, he couldn’t stop.

Eades recommends that you give this book to every “lipophobe you know who is able to read”. That’s because it “will change many minds”.

Teicholz has had her share of detractors. Not surprisingly, those are critics who support conventional medical and dietetic “wisdom”. Thus, they support high-carb, low-fat eating regimens.

Some said that the book has no value because Teicholz is not an MD or a scientist or dietitian. I hear that vacuous argument regularly from doctors and dietitian academics.

Teicholz has an impeccable academic pedigree. She is a Yale and Stanford graduate where she studied biology and majored in American Studies. She also has a master’s degree from Oxford University in the UK and studied journalism at Columbia.

One critic claimed that Teicholz had plagiarised the work of fellow US science journalist Gary Taubes, author of Good Calories, Bad Calories, Why we Get Fat and others. Taubes dismissed that with the contempt it deserved.

Thereafter, when all else failed, critics tried to discredit the book because it contained a few errors. However, all they proved is that Teicholz is human, fallible and has integrity. And that if she ever makes a mistake, she owns up and corrects it.

Teicholz read thousands of scientific papers and attended many conferences in researching for the book. And she interviewed “pretty much every single living nutrition expert in the US, some several times, plus scores more overseas”.

Consequently, she learned that we can’t just pin mistakes of nutrition science on “the nefarious interests of Big Food”. The source of our misguided dietary advice is in some ways “more disturbing”, Teicholz says.

Experts at trusted institutions have driven that advice believing it to be in “the public good”. Thus, what passes for dietary advice is often the result of zealotry, passion and dogma, not science.