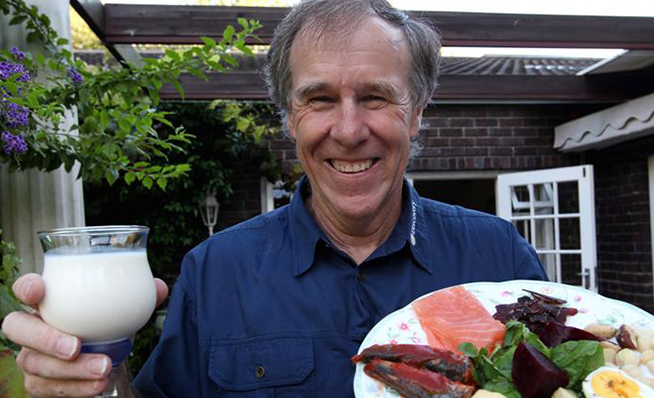 THE Association of Dietetics in South Africa (ADSA) wants you to believe it only wants to muzzle world-renowned Prof Tim Noakes because he dared to express views about nutrition on Twitter. With help from the Health Professions Council of South Africa (HPCSA), ADSA is doing the very opposite of silencing him. The HPCSA trial against Noakes resumes in Cape Town in October. It has given him an international platform for dissemination of the growing body of scientific evidence in favour of low-carb, high-fat (LCHF). After the November 2015 session of the HPCSA hearing, ADSA issued a statement saying the hearing is only about Twitter. Here’, Noakes’ lawyer, Adam Pike, of Pike Law, explains why this case really is not about Twitter:

On 10 December 2015, ADSA president Maryke Gallagher published a column on Health24.com entitled Noakes hearing – it really isn’t about the sponsors. (Click here to read ADSA’s statement in full.) Presumably, the column was posted by Gallagher in order to defend her organisation’s position in relation to the influence its sponsors exert over its activities, its policies and the nutritional information that it endorses.

It is noteworthy that ADSA saw fit to elaborate on this point in the public press.

The influence that ADSA’s sponsors exert over it and the role played by industry bodies in funding nutritional research remains in issue in the Noakes hearing held by the Health Professions Council of South Africa (HPCSA).

Also read: NOAKES EXPOSED: THE REAL BEEF DIETITIANS HAVE WITH HIM!

Justice Kate O’Regan stated in South African National Defence Union v Minister of Defence and Another 1999(6) BCLR 615 (CC) that “Freedom of expression lies at the heart of a democracy. It is valuable for many reasons, including its instrumental function as a guarantor of democracy, its implicit recognition and protection of the moral agency of individuals in our society and its facilitation of the search for truth by individuals and society generally. The Constitution recognises that individuals in our society need to be able to hear, form and express opinions and views freely on a wide range of matters.” (my emphasis)

More recently, the Constitutional Court stated in Democratic Alliance v ANC and Another [2015] ZACC 1 (CC) at para 122 that “(freedom of expression) also helps the search for truth by both individuals and society generally.

“If society represses views it considers unacceptable they may never be exposed as wrong. Open debate enhances truth-finding and enables us to scrutinise political argument and deliberate social values.” (my emphasis)

Must read: CAN YOU TRUST DIETITIANS WHO ARE IN BED WITH BIG FOOD? 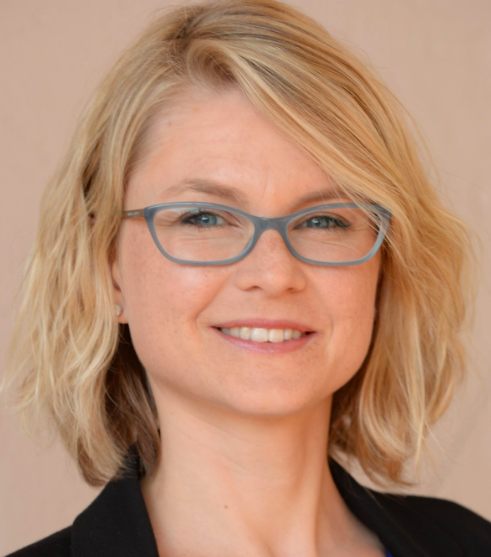 In the second paragraph of her column, Gallagher (pictured left) states the following:

“The hearing follows a query filed with the Council by former Association of Dietetics in South Africa (ADSA) president Claire Julsing-Strydom. The query was prompted by Professor Noakes’ advice to a mother, via Twitter, on complementary feeding for her infant and was filed with the intent to gain clarity and guidance on the use of social media by health professionals.”

The statement is problematic for a number of reasons:

Firstly, Gallagher misleads the readers of her column by characterising ADSA’s approach to the HPCSA as a “query”. The Health Professions Act makes provision for “complaints” relating to “unprofessional conduct”. There are no provisions for “filing queries”. Were it a “query” that ADSA intended to file, it went about its enquiries in quite the wrong way.

Gallagher’s use of the term “query” is therefore inappropriate.

Secondly, Gallagher misleads the readers of her column again by stating that the intention behind the “query” was to “gain clarity and guidance on the use of social media”. This is a patently untrue statement. 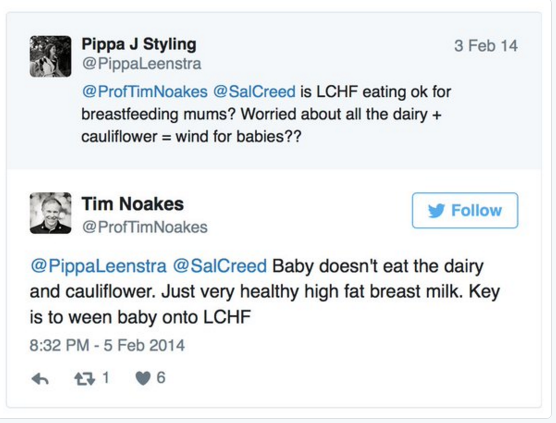 Ms Julsing-Strydom’s initial reaction was: “I am horrified!! How can you give advice like this????”

“You have gone too far, be sure that I will be reporting this to the Health Professions (sic) Council SA”

The following morning, Ms Julsing-Strydom addressed an email to the HPCSA.

The email read as follows:

“To whom it may concern

“I would like to file a report against Prof Tim Noakes. He is giving incorrect medical (medical nutrition therapy) (sic) on Twitter that is not evidence based. I have attached the tweet where Prof Noakes advises a breastfeeding mother to wean her baby onto a low carbohydrate high-fat diet.”

“I urge HPCSA to please take urgent action against this type of misconduct as prof (sic) Noakes is a ‘celebrity’in South Africa and the public does not have the knowledge to understand that the information he is advocating is not evidence based – it is especially dangerous to give this advice for infants and can potentially be life-threatening. I await your response.

While it may be the case that Ms Julsing-Strydom was prompted by Prof Noakes’ tweet on complementary feeding for infants, it is patently false that the complaint was filed with the intent to gain clarity and guidance on the use of social media by health professionals.

Ms Julsing-Strydom’s email to the HPCSA speaks for itself.

Moreover, it was clear to any person attending the second day of the hearing against Prof Noakes that the concern that Ms Julsing-Strydom had with Prof Noakes was not the manner in which he gave his opinion on nutrition. Rather, her concern was with the substance of his opinion.

Quite simply, he would not agree with ADSA’s views regarding nutrition.