Should you follow advice from dietitians who are bed partners with the food  industry? Even when they say that they sleep with Big Food just for the sponsorship money? And that food companies have no influence on their advice whatsoever?

In the first of a two-part series, Eategrity consumer activist  Sonia Mountford looks at the links between the Association for Dietetics in South Africa (ADSA) and Big Food. She also looks at what effect this may be having on the advice it gives. – Marika Sboros

Like many consumers, you are likely to be more aware these days than you were in the past, of what you are eating. In particular, what certain foods or components may do to promote your health and reduce your risk of disease.

But who are those advising you – and consumers in general – on which foods to eat an to avoid? Do they advise you to make dietary choices according to what processed food manufacturers are telling them? 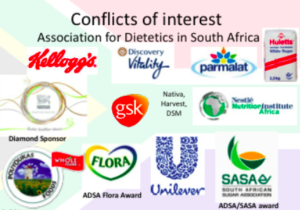 You might think that it would be foolish for anyone to listen to profit-driven companies. But it seems that that is exactly what nutrition “experts” are doing. In effect, they are putting your health in the hands of Big Food (as large commercial entities dominating the food and beverage environments are popularly known). They may also do so without even being aware of it. Or at least one would hope they are not aware of it.

One of these bodies is the Association for Dietetics in South Africa (ADSA). ADSA  influences government food policy and has very strong ties with Big Food – and Big Soft Drinks.

A study in the open-access, peer-reviewed journal Plos (Public Library of Science) One in 2012 is titled “Big Food”, the Consumer Food Environment, Health, and the Policy Response in South Africa. It confirms that Big Food’s reach is becoming longer and is implicated in unhealthy eating.

The study is by South African researchers at the University of the Western Cape, Bellville’s School of Public Health and Department of Dietetics, and a British researcher at the Centre for Food Policy, City University in London. They say that Big Food has developed corporate social responsibility (CSR) programmes that involve health. And that that’s in response to an increase in consumer health awareness.

These CSR programmes often promote products with questionable ingredients as healthy. Or they align themselves with health institutions, the researchers say.

“The generally weak national response to the influential promotion of these products is illustrative of the rudimentary status of South Africa health policy regarding regulation of the food environment,” they say.

To make an informed choice you need sufficient knowledge. That is key to improving nutrition security, given the links between diet and global epidemics of non-communicable diseases (NCDs), such as obesity, heart disease, diabetes, respiratory disease, some cancers, and increasingly these days dementia (it is called type 3 diabetes, because of its links with diet and sugar), and malnutrition. And since both NCDs and malnutrition are shown to occur even when a household has access to adequate amounts of nutritious food.

“The economic development of a nation depends in part on the health of its population. Addressing the (NCD) epidemic is critical to a virtuous cycle of improved public health outcomes and better economic growth.

“Decreasing premature mortality from NCDs is now on the post-2015 development agenda. The accumulated losses to South Africa’s gross domestic product between 2006 and 2015 from diabetes, stroke and coronary heart disease alone are estimated to cost the country US$1.88 billion.”

“SA RD’s getting it right!” she said.

But what exactly are South African registered dietitians (RDs) getting “right”? You don’t have to be an expert in dietetics to know that the guidelines are basic and don’t adequately address the issue of, for example, sugar.

The recommendation to “use foods and drinks that contain sugar sparingly and not between meals” does not go nearly far enough. That’s if you consider the implications of poor-quality diets. And that these have been long associated with obesity and the rise of NCDs that are becoming more serious among the poor.

It raises the question why these guidelines also downplay the responsibility of Big Food? Could it be because Big Food also had direct influence on the guidelines?

While she was Nutrition Manager for Kellogg’s South Africa, Cloran was integral in the launch of the South African Kellogg corporate website. She represents the Kellogg Company in extensive media appearances.

In February 2015, I asked Strydom if anyone could reasonably see ADSA as a credible source of dietary advice if it accepts sponsorship from companies producing products associated with an increased risk of NCDs, if not a direct cause of them.

In particular, I asked about their Gold Sponsor — Kellogg’s.

ADSA responded predictably enough. It claimed that sponsors “have never influenced decisions” that ADSA has made. ADSA also claims that companies  “donate funds” simply to “promote the dietetics profession in South Africa”.

And ultimately to “improve nutrition education to the public through dietitians”. ADSA declared itself to be “grateful to our sponsors for their assistance”.

Denial of conflicts of interest between Big Food and dietetic groups is common and a growing global concern.

Now a word from our sponsors

In January 2013, US public health lawyer Michele Simon released an investigative report, titled “AND Now A Word From Our Sponsors”. It delved further into the ties between Big Food and the Academy of Nutrition and Dietetics (AND), formally the American Dietetics Association.

The report shows the food industry’s deep infiltration of the top US nutrition organisation that is also a world body. As a result, this raises serious questions not only about that profession’s credibility but also about its policy positions.

Watchdogs Sheldon Rampton, and John Stauber, are the authors of Trust Us, We’re Experts!: How Industry Manipulates Science and Gambles With Your Future . They note that the AND rarely criticises food companies for fear of “biting the hand that feeds them.

Recently, the AND licensed its “Kids Eat Right” seal to processed cheese Kraft Singles. In response to criticism, the AND claimed that this was “not an endorsement”. Kraft was merely a “proud supporter of” AND’s Kids Eat Right program.

The AND told ABC News that the logo on the processed cheese product was more like an ad for Kids Eat Right. However, that’s probably disingenuous. It’s also a reversal of how most ads work as Kraft paid the advertiser (AND) an undisclosed amount to place the logo.

Dr Arthur Caplan is a bioethicist at New York University’s Langone Medical Centre. ABC news quoted him as saying that he was “99.9%” sure that consumers would read the logo as an endorsement from nutritionists and dietitians.

In an ABC News statement, Kraft spokeswoman Jody Moore said that Kraft and Kids Eat Right would collaborate on a “nutrition education campaign” for three years. And that the aim was “to raise awareness that the diets of America’s kids are lacking in three important components – dairy, calcium and vitamin D.”

AND has since revoked the decision. In part, that was due to pressure from their constituent group and US consumers’ outcry.

The AND’s guidelines for corporate sponsorship states that it has deliberately designed its procedures and formal agreements with external organization to “prevent any undue corporate influence”. This is particularly where there is “a possibility that corporate self-interest might tend to conflict with sound science or ADA positions, policies and philosophies”.

Sounds familiar, right? But just how the ADSA and the AND define “influence” is unclear.

“At the same time, we don’t believe in endorsing brands to the communities within which we work. Hence the decision to remove logos from our public-facing channels as this can influence public perception. Our sponsors are also not allowed to use the ADSA logo on their websites or with their products.”

So, ADSA has stopped displaying logos of sponsors publically but these sponsors, along with ADSA and sponsors’ logo, are heavily promoted to member dieticians, mostly through the adsa.squarespace.com, RDs members only portal. S

Kellogg’s even supplied some of the dietary recommendations for ADSA to disseminate.

In fact, ADSA assures their sponsors of this access to member RDs with a helpful hint: “Visibility of our Sponsors on the ADSA Website (accessed by ADSA members, associate Medical Professionals as well as the General Public searching for a Dietician), delivers strong Brand/Company association.

In 2014, when questioned about Huletts Sugar and Nestlé’s sponsorship of ADSA in a Times Live article, Strydom said that the association’s advice was independent and it did not endorse products.

The article further stated that the “NGO only gets 34% of fund (sic) raised from businesses.” But 34% of what amount?

Companies have also apparently supported ADSA in other ways, such as offering meals or providing venues for meetings.

Anyone with a gut must have a feeling about the clear conflict of interest with ADSA having Big Food as sponsors.

Just what various sponsorship benefits ADSA offers is still uncertain but since ADSA influences health and dietary policy, every South African is entitled to know exactly how the sponsorships work. Here are some of the links:

To be clear, the problem seems to lie with ADSA and not with all RDs. However, there appears to be no overt unhappiness among RDs with ADSA’s Big Food sponsorship. Should their silence be interpreted as acquiescence?

And this is only an example of one organisation and one Big Food manufacturer.

What about the other sponsors?

How many advising South African government policymakers about health and food-related issues have conflicting industry links? How deep does the influence go and how do we dig it out?