World Number One tennis player Novak Djokovic is back as Australian Open champion for 2016. It’s hard to believe that just a few years ago, the Serbian’s career was in precipitous decline. The pundits were speedily predicting Djokovic’s early demise.

Now, he’s is firmly back on track, or rather on court, in winning form. Dietary change appears to be a factor. He has documented his health journey in a memoir, Serve To Win. 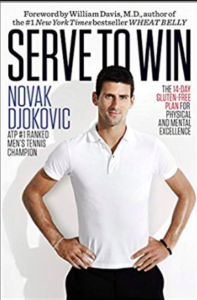 His Australian Open performance throughout coupled with his spectacular wins at Wimbledon and the US Open in 2015 show just how his star has risen since 2010. That was when Djokovic consulted nutrition and applied kinesiology therapist Igor Cetojevic for help with his flagging form.

Muscle testing is a controversial alternative-medical technique used in so-called applied kinesiology. The idea is that organ dysfunction shows up in specific muscle weakness. Research, so far, suggests that muscle testing is no better than placebo. In other words, it’s pseudoscience.

Cetojevic dramatically overhauled Djokovic’s diet. He also advised Djokovic to cut out sugar and eschew all foods containing gluten. Gluten is a gluey protein composite found in wheat and related grains, including barley and rye.

Cutting out gluten likely wasn’t that easy for Djokovic. It is in bread and pasta that are staples of the Serbian diet, and other common foods. It’s also in pizza, one of Djokovic’s favourite foods. It didn’t help that his parents ran a popular pizza restaurant in Serbia. His family now runs a chain of gluten-free restaurants in Serbia appropriately called “Novak ”.

But as we all know, desperate times call for desperate measures. Djokovic was desperate enough to follow his therapist’s orders to the letter. Results were a gamechanger practically overnight, transforming his health in body and mind, and of course his tennis.

‘Listening’ to his body

In his book, Djokovic says that the path has involved learning to “listen” to his body.

Once he started doing that, his aches and pain vanished, he writes. His sleep improved, he reported feeling more mentally alert, his energy levels soared. Within a year, he became the world number one. He has stayed at that lofty height ever since 2011. Except for a short hiatus as Number Two in 2014, after Swiss champion Roger Federer dethroned him.

“You could call it magic. It felt like magic.”

It certainly looked just like magic on court, precipitating the winning streak that has restored his World Number One rating.

Djokovic’s thoughts on science and health in his book are best described as “unconventional”. I’d add quirky and off-the-wall to that.

Although vegans tried to appropriate him Djokovic eats simple meals these days, mostly white meat, fish, vegetables, beans, nuts, seeds, chickpeas, lentils, fruits and healthy fats. He admits to finding it difficult at times to maintain gluten-free eating on tour. But he does so with what his specialist team has described as “extraordinary dedication”.

His diet appears to be much lower in carbs than in the past. However, he isn’t against a high-sugar boost during on-court changeovers. He enjoys high-sugar, medjool dates, the diamond of sweet treats.

Media reports have at times claimed that Djokovic has coeliac disease and have called him the“world’s most famous coeliac ”.  However, the experts will tell you that coeliac disease id “a generic blanket term”. It is also “not unlike how Kleenex today signifies no more than a box of tissue paper of any brand”.

The term covers just about “everything connected to a reaction to gluten”, US nutrition specialist Dr Rivka Roth says on the Greenmedicine.com website said. Roth sees the need for a proper distinction between coeliac disease, non-coeliac, and/ or coeliac gluten sensitivity.

Gluten-free eating is also too often and wrongly touted as a weight loss aid. Certainly, Djokovic has returned to court in streamlined shape, after cutting gluten and dairy from his diet. But is gluten-free really all it’s cracked up to be for weight loss?

Gluten-free is essential for a segment of the population that has gastrointestinal conditions such as coeliac disease. It is also for those who can’t tolerate even small amounts of gluten, says Erasmus.

A lucrative industry has grown around gluten-free products, she says. However, these are “not always good for slimming”.

And of course, just because a product is “free-from” doesn’t make it a health food. Production of gluten-free products, such as bread, cakes, biscuits and pasta, involves removing the wheat protein from the food and replacing it with another flour, such as almond, rice or corn. This “missing gluten” makes it difficult for bread and bakery products to retain their shape and softness during baking.

To solve this, manufacturers introduce additives, such as corn starch, xanthum gum and hydroxypropyl methylcellulose. They also pack products with added sugar and fats to make them tastier, says Erasmus.

“Ironically, the result is that gluten-free bread can make it harder to reduce your waistline.”

Gluten-free eating requires people to become “gluten detectives ”. They need to scour food labels and look for hidden gluten because it is in everything, says Erasmus. That includes products you’d least expect to contain gluten, from frozen vegetables to soya sauce and medication.

And becoming a father for the first time recently appears to have given him a new sense of purpose and grounding. Wife Jelena gave birth to their son, Stefan, in October 2014.

While gluten-free eating has benefitted Djokovic, he makes clear in his book that it’s not a one-size-fits-all solution. Along with all the other changes, he says that diet has helped to teach him that in his case, “nothing is impossible”.