There’s good reason that Swiss tennis champion Roger Federer is a phenomenon on and off court. From a brat who used to hurl his racket to the ground when he lost a match, he has matured into a sporting superstar. He has evolved into an elegant, graceful, hard-working tennis professional. Yet pundits were quick to write Federer off a just few short years ago. Boy, did they get that wrong! He has been making changes, including to his diet. But there will be many other factors accounting for his success.

It helps that Federer comes from a secure family background with supportive parents. Mother Lynette is South African. He is married to Mirka, a former tennis champion herself. Together, they have four children, twin girls and twin boys. Fatherhood clearly suits Federer.

He has established an eponymous foundation in 2003 to give children in southern Africa access to quality education.

Federer also demonstrates a core humility that attracts fans to him in droves. It is the perfect foil for the athleticism and consummate skill with which he demolishes opponents, most recently British Number 1 Andy Murray in the Wimbledon semi-final.

Currently Number 2 in the world, Federer made it to the Wimbledon final this year to face World Number 1, Serbian Novak Djokovic. That makes it Federer’s 26th grand slam final, extending the all-time record he established at Wimbledon in 2009. It’s a repeat of last year’s final that he lost. However, his performance throughout that championship was extraordinary as it has been this year.

Like Djokovic, Federer has a close-knit team of coaches, physios and nutrition experts supporting him. Among them is former Swedish tennis champion Stefan Edberg.

Djokovic has revealed the diet and exercise plan that has made him the world’s top tennis player. He went gluten-free a few years ago, documented it in his book, Serve to Win. Djokovic credits diet in part with dramatically improving his game. He now eschews bread, pasta and anything made with flour. According to a feature in UK’s The Independent, he avoids dairy as well.

Federer plays much closer to his chest when it comes to what he actually eats and drinks building up to and during big matches. One Internet report suggested that Federer eats a high-carbohydrate, low-fat  (HCLF) diet. My gut instinct tells me that is unlikely to be true.

His diet is not all healthy and Federer is known to have a sweet tooth. But when he prepares for competition, I’m betting that he goes for optimum fuel from foods.

South Africans may like to appropriate him as eating a low-carb, high-healthy fat diet, or “Banting” as it is popularly known in their home country. However, a growing body of solid scienceshows that an optimum diet for elite sports performance is complex and there is no one-size-fits-all.

A good source on diet for sports performance is groundbreaking research by top US scientists and professors Stephen Phinney and Jeff Volek. Phinney and Volek are  authors of The Art and Science of Low-Carbohydrate Performance.

In the book, they investigate how a low-carb diet can and should be used by athletes. Their earlier book, The Art and Science of Low Carbohydrate Living, gives the evidence low-carbohydrate diets to treat a range of illnesses. In particular, they look at low-carb to manage insulin resistance (IR, aka carbohydrate intolerance).

Their later book is The Art and Science of Low Carbohydrate Performance. They say that athletes as a group on the continuum of IR “cluster on the side of insulin sensitivity”. As well, most athletes “do not have anywhere near the same level of carbohydrate intolerance as someone who is overweight with metabolic syndrome or diabetes”. 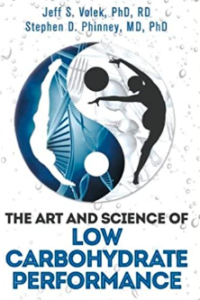 That raises the question of why they would then recommend a low-carb diet for athletes. After all, conventional nutritional “wisdom” still holds that carbohydrates are the best fuel for the body. Phinney and Volek diplomatically say that despite the best intentions, the majority view “does not always represent the truth”.

They say that a high-carb diet really is bad for most people. That’s especially for elite athletes. It “locks them into dependence on carbohydrate as the dominant fuel for exercise”.

Endurance athletes know what happens to performance when their carbohydrate tank runs dry: “Performance goes down in flames.”

It’s an unfortunate reality, say Phinney and Volek, that the human body is not naturally designed to switch easily from carbs to fat as its predominant fuel.

“Once the (carbs) are gone, you can’t power your performance with fat,”  Phinney and Volek say. That’s despite the fact that a carbohydrate-depleted body still has tens of thousands of fat calories on hand.

The key fact underlying their book is that athletes – and the rest of us more ordinary mortals – can train the body to burn fat. And all they need to do is simply change the diet over a period of a few weeks. In that way, the body turns blood sugar and glycogen into secondary fuels.

“Once you make this transition, you can then train harder, perform longer, and recover faster,” they say.

Therein lies the simple answer to why both endorse a low-carb lifestyle for athletes:

“ This strategy has worked for us and many people we know,” They say.  More importantly, they have both conducted and published human research that supports this approach. It adds to a growing body of literature that now points to the merits of reducing dietary carbohydrates to optimise fat metabolism.

I’d be surprised – shocked, more likely – to find that Federer and his team are unaware of this unique knowledge base. Or that they are oblivious to its implications for sports performance and health in both body and mind. I have little doubt that he is Banting or a version not far from its basic principles.

At the very least, Federer is highly unlikely to be eating a diet high in refined, highly-processed, high-sugar and high-carbohydrate foods. He shows no signs of insulin resistance and, therefore, has no need to keep carbs very low (in the ketogenic range).

I’d say that overall his lean, mean physique, stamina and endurance levels on court are strong signals of at the very least a low-carb bias. And he definitely does not demonstrate fat phobia.