Among the plethora of diet books weighing down virtual shelves, I came across a quirky one: The P:E Diet by US physician Ted Naiman.

It puts protein back on a pedestal as the prince, if not the king, of foods for health in body and mind.  It elevates high-intensity exercise to brave new heights. And it weighs in on low-carbohydrate versus low-fat diet wars.

He and co-author William Shewfelt come down on both sides of those wars. They also hammer solid nails into the coffin of perennial fear-mongering around high-protein diets. Still, many experts see potential harm in an “unnaturally high intake of protein” long-term.

The P:E in the title stands for an intriguing protein-to-energy ratio in foods. The book’s subtitle is Leverage Your Biology To Achieve Optimal Health. Naiman and Shewfelt might have added: Buffest Body And Optimum Sports Performance Safely, Effectively, Sustainably.

At first glance, they can seem unlikely co-authors. That’s despite before-and-after pictures that make them the best adverts for what they preach. Both are “ripped” in the body-building sense. Both combine carnivore-style eating, a strategic blend of cardio and explosive strength-training workouts and focused goal-setting. From there, they diverge. 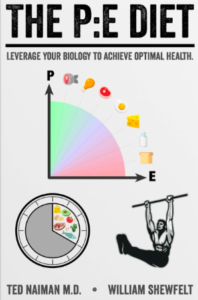 Naiman is a board-certified family medicine physician in Seattle, Washington. He focuses his research and medical practice on practical implementation of diet and exercise for health optimization. His undergraduate degree is in mechanical engineering. At play, Naiman is a pro-level bassist with an addiction to Ultimate Frisbee.

Shewfelt is probably best known for his portrayal of Brody the Red Power Ranger in the Power Rangers Ninja Steel TV series (2017-2018). He is also co-host of the Will to Win Podcast and the PrimalBody.co coaching community.

Their partnership works in this book and their goals are clear. They wanted to write a book that “absolutely anyone” could pick up, read in an hour, and “walk away with a double-barrelled blast of extremely easy to comprehend yet life-changing and actionable knowledge”. Thus, they designed it as simply and practical as possible and “intentionally” skipped references and “minutiae”. That’s not shorthand for a lack of scientific backbone.

They have clearly aimed it at the lay reader. There’s an abundance of colourful images and a humorous, reader-friendly writing style. There are references to “busting your ass” at the gym. They pepper content with “darns”, “damns” and “hecks”. They label one image of desirable foods with “low-carb” crossed out and replaced with “low crap”.

Academics, MDs and scientists who do wander through these pages will probably find that off-putting. It’s also not for LCHF purists.

Naiman and Shewfelt say they’ve aimed to provide all the basic concepts that readers need to implement the “best diet and exercise plan” for themselves. None of those concepts is new but they are evidence-based. The authors end up most helpfully curating in lay terms concepts from the best of what works for health in body and mind.

They promise “plenty of individual customization” and a basic template for advice that is “more or less the same for everyone”.  That can sound contradictory but not as they pull it together in their P:E ratio.

Naiman and Shewfelt view foods for optimum health through an evolutionary lens. In other words, foods that we evolved to eat over millions of years. They say that these were high-protein, low-energy and they endorse animal foods as most nutrient-dense, including meat, the redder the better. They also give the occasional nod to plant-based diets although it’s clear that neither is a fan.

And while they are not fat-phobic, they put dietary fat firmly in the place they believe it best deserves. That’s not just alongside protein at times but below it, for metabolic advantage and depending on the desired health or lifestyle goal.

They don’t push any one diet as a panacea for all ills.

Click here to read: Bikman on the hidden epidemic, why we get sick, how we heal

They support growing evidence for insulin resistance or hyperinsulinemia (high blood sugar) as the root cause of the tsunami of chronic lifestyle diseases swamping the planet. Chief among those are obesity, type 2 diabetes, and heart disease, increasingly also dementia diseases and cancers. They support evidence for LCHF foods and diets for those conditions and say that type 2 diabetes is “100% preventable”.

So much so that they call LCHF diets “normal”.

At the other end of the spectrum, they identify the abnormal, “worst” diet for health optimization. It is no big fat surprise which that is: the officially sanctioned Standard American Diet – SAD for short.

At the heart of their P:E ratio is the proposition that we are all “eating enough protein” – even vegetarians. British public-health researcher Dr Zoë Harcombe would likely agree. She pointed out years ago that protein is in all foods except pure fats (oils/lard) and pure carbohydrate (sucrose). It’s in lettuce, apples, bread, steak, every other food because, Harcombe says, there’s “no pure protein food on the planet”.

She has also pointed out that no foods occur naturally high in both fats and carbs. That’s apart from some notable exceptions, such as breastmilk, nuts and seeds. Naiman and Shewfelt make the same point.

They also say the real question is not how much protein we eat but how much energy we had to eat to get that protein. Therefore, they punt for less is better on the energy score.

Which is where their P:E ratio comes in. They argue in favour of specific high-protein, low-fat, very-low-carb foods as least energy-dense, “most effective” for rapid weight loss and buffest bodies. Thus, whey protein and egg white come out tops.

They readily admit that these are not most nutrient-dense or tastiest. And that a diet high in them won’t stave off hunger pangs, so is unlikely to be sustainable. As a diet strategy, it’s deliberately “heuristic”, they say. In other words, a practical approach not guaranteed optimal or even particularly rational but that serves a short-term goal.

At the absolute bottom of their P:E ratio is a “trifecta” of the worst foods. These combine not just carbs and fats – a combination they advise avoiding if possible – but also high-energy-density. They call these “nutrient-devoid, devitalised, dead” but edible foods that provide “dangerously high energy with no micronutrient satiety”. They give refined carbs a huge thumbs-down and advise avoiding these like the plague.

Naiman and Shewfelt do say that wholefoods provide a “pretty easy way” to avoid carbs-plus-fat combinations.

While their support for benefits of LCHF and carnivorous diets is clear, another utilitarian leaning comes through. It’s the idea that humans evolved to be “cucinivores” – a word I hadn’t come across before. Naiman sent me a link to a 2015 study in which researchers conclude that humans are “well adapted as consumers of processed, including cooked, foods”.

That’s a message guaranteed to warm the cockles of hearts in processed food and soft-drinks industries – and their proxy MDs, dietitians and scientists.

Down the low-fat ‘rabbit hole’

Naiman and Shewfelt say that if you take a deep dive into the low-fat “rabbit hole”, you will find “all kinds of success stories”. Ditto for low-carb. “Both are right (in these wars),” they say.

Their collaboration comes into its own in the role of exercise and health. For “optimum healthspan”, they say that the goal should be achieving the highest lean mass (muscle and bone) at the lowest fat mass. This allows for the “greatest insulin sensitivity and metabolic flexibility”.

The best way to achieve it involves three “basic human movements –  pushing, pulling, and using the legs against gravity”, they say. That requires regularly targeting these three movements in specific ways. And by placing maximum tension in the muscles for a maximum time.

They base their advice on HIIT (high-intensity interval training) and the “Pareto Principle”. That’s the 80/20 rule named after Italian economist, political scientist, and philosopher Vilfredo Pareto.

Some call the principle a “universal truth”. Others say it’s merely an observation about the “imbalance of inputs and outputs” required for success in various fields. In this case, the authors give a recipe for just 20% of effort in both diet and exercise to give 80% of desired results. That will resonate with time-poor readers wanting relatively safe quick fixes for health in body and mind.

My guess is that this book will hit its target market and do well.