Scottish GP Dr Malcolm Kendrick is a brave man. He dares not just to write about the great vaccination debate but to be even braver. Or foolhardy, depending on your point of view.

He looks at the official history of vaccination with a somewhat jaundiced eye. He questions the medical profession’s “unquestioned faith in vaccination”.

Before you read further, Kendrick, like many MDs who share his views, is not “anti-vaxx”. (Neither am I – my most devoted, relentless MD Twitter troll notwithstanding – but that’s for another time.)

Vaccination remains one of the most controversial  of medico-scientific debate. Enter on the “wrong side” and you will get some MDs’ knickers in self-righteous knots. You will quickly feel the full force of their self-righteous fury – usually in the form of an anti-vaxx smear. And delivered with a fervour bordering on the religious.

It matters not how reasoned, polite or logical your question is. You’ll need to gird your loins, as Kendrick does, for the fallout that will surely follow daring to challenge vaccination dogma, whether on safety or efficacy. 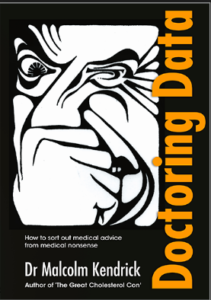 Kendrick is no stranger to rushing in where self-proclaimed medical “angels” fear to tread. He is author of many provocative books, Doctoring Data among them.

To buttress his argument, he wields that most trustworthy of weapons in any ferocious medico-scientific argument: the evidence. It works wonders against anyone thinking of telling him that he’ll “be responsible for killing thousands of kids”. Or that he just “doesn’t understand the science”:

As readers of this blog will know, my primary area of interest is cardiovascular disease, which a big and complex subject, where anyone questioning the ‘conventional’ ideas gets ruthlessly attacked. However, in comparison to the area of vaccination, the battles in cardiovascular disease pale into insignificance. Mere squabbles in the nursery.

I am a member of an on-line doctors’ community in the UK called Doctors Net. Not open to the public. Whenever any story about vaccination emerges, the vitriol, anger and naked rage are quite scary to observe.

Whenever the issue of MMR raises its head on Doctors Net, doctors have stated that Andrew Wakefield should be thrown in jail and never allowed to earn any money ever again, that he is a crook and a criminal. And those are the nicer comments.

It is clear that, in the medical profession, there is an unquestioned faith in vaccination. That is, all vaccinations, for all diseases, everywhere – for everyone. Anyone who dares to hint that, ahem, there could be some negative issues associated with vaccination is subjected to withering contempt.

‘You will be responsible for killing millions of children.’ You don’t understand science.’ And suchlike.

The origins of vaccination

When it comes to the science, it does amuse me that vaccination began before anyone understood any of the science – of anything to do with microbes and the immune system.

It all began, so it is recorded, with the observation that milkmaids were much less likely to get smallpox. This led to the idea that you should deliberately infect people with a bit of cowpox, to prevent them getting smallpox. Bold.

“The terms vaccine and vaccination are derived from Variolae vaccinae (smallpox of the cow), the term devised by Jenner to denote cowpox. He used it in 1796 in the long title of his Inquiry into the Variolae vaccinae known as the Cow Pox, in which he described the protective effect of cowpox against smallpox.” [From the website that cannot be named… Wikipedia actually]

This was suggested at a time when all doctors thought infections were spread by Miasma. Basically, a nasty smell. No-one had the faintest idea that there were bacteria or viruses. Somewhat ironically, vaccination – giving a small amount of a substance to cure/prevent a nasty disease – became the underlying principle of homeopathy. Which most doctors now angrily dismiss as “woo woo medicine”.

Vaccination began as a hunch …

Clearly, vaccination did not start as science. It basically started as a hunch, based on no comprehension of the science at all. Of course, that doesn’t make it wrong. But you can hardly suggest it was founded on a thorough understanding of the human immune system.

Edward Jenner did not know that such a thing existed and nor did anyone else. It was just a good guess.

The science of vaccination then became, what I call, backwards rationalisation: “It works, now let us work out how the hell it actually works.” Again, nothing wrong with this. The best science often starts with observation, not a hypothesis. Graphene is a recent example. Two scientists larking about in the lab with Sellotape and pencils.

Click here to read: Death by medicine: doctors who harm more than they heal

However, I do speak as one who has had seven hepatitis B inoculations and, once, just about managed to provide a blood test to show that I had made enough antibodies – to allow me to work as a doctor. A friend, who worked as a surgeon, had 22 hep B inoculations and never managed to raise an antibody.

He did explain to me how he continued to work as a surgeon but I have forgotten how he managed.

Which means that I have personal – and slightly painful – experience that vaccination is not equally effective for everyone. Why not? Does anyone care about such things? It seems not.

Why can’t you question the ‘mighty vaccination’?

Just close your eyes and vaccinate away. No-one can question anything. Such as, why do inoculations produce antibodies in some people, and not others? Kind of interesting you would think – but no.

Question not, the mighty vaccination.

This is strange because research has clearly established that vaccination does not work in many people:

“Vaccine failures among apparently adequately vaccinated individuals were sources of infection for at least 48 per cent of the cases in the outbreak. There was no evidence to suggest that waning immunity was a contributing factor among the vaccine failures. Close contact with cases of measles in the high school, source or provider of vaccine, sharing common activities or classes with cases, and verification of the vaccination history were not significant risk factors in the outbreak.

“The outbreak subsided spontaneously after four generations of illness in the school and demonstrates that when measles is introduced in a highly vaccinated population, vaccine failures may play some role in transmission but that such transmission is not usually sustained.’”

Would be nice to know why?

The experts say that if you reach a measles vaccination rate of 95%, in a population, you cannot get an outbreak. Seems that is wrong.

You can get an outbreak in a 98% vaccinated population. Wouldn’t it be nice to know why?

It does seem weird that measles is the chosen battleground for the vaccine furies. I am not entirely sure why.

You would think the highly vocal pro-vaccinators would point to smallpox, or polio – or suchlike. Although, to be frank, I look at smallpox and wonder. I wonder how the hell we managed to eradicate this disease so quickly and simply. The entire world successfully vaccinated in a few years – with a perfect 100% record.

No vaccine failures, all populations in the entire world vaccinated? Quite some feat.

An alternative explanation is that some diseases naturally come and go. Measles, for example, was an absolute killer 300 years ago. Captain Cook introduced it to South Seas islands.

The mortality rate was enormously high in native populations that were never exposed to it before. Gradually the death rate attenuated. In most of the Western World measles was becoming a “relatively” benign disease by the time vaccination came along.

Looking back in history

If we look back in history, the black death wiped out half the population of Europe. What was it? It was almost certainly not the plague, although many claim that it was. From the descriptions of those who died from it, it seems it was possibly a form of Ebola (haemorrhagic fever).

“The Black Death of the 1300s was probably not the modern disease known as bubonic plague, according to a team of anthropologists studying these 14th-century epidemics. ‘The symptoms of the Black Death included high fevers, fetid breath, coughing, vomiting of blood and foul body odor,’ says Rebecca Ferrell, graduate student in anthropology. ‘Other symptoms were red bruising or hemorrhaging of skin and swollen lymph nodes. Many of these symptoms do appear in bubonic plague, but they can appear in many other diseases as well.’

“Modern bubonic plague typically needs to reach a high frequency in the rat population before it spills over into the human community via the flea vector. Historically, epidemics of bubonic plague have been associated with enormous die-offs of rats. ‘There are no reports of dead rats in the streets in the 1300s of the sort common in more recent epidemics when we know bubonic plague was the causative agent,’ says Wood.”

Of course, we cannot be sure what the Black Death was. We do know that it came, it killed, it went. It also appeared to leave a legacy of people with CCR5 Delta32 mutations. The Ebola virus (or, indeed HIV) cannot infect people with this mutation.

Ebola and HIV both gain entry to cells using the CCR5 protein. If it’s missing, the virus cannot get in. (Yes, you can cure HIV by giving bone marrow transplant from a donor with the CCR5 Delta 32 mutation – little known fact.)

A closer look at vaccination successes …

Why would we have this mutation far more commonly in areas of Europe than, in say, Africa – where the Black Death did not occur? Unless it provided a survival advantage at some point, against a virus that was (or was very like), Ebola.

The plague itself – where has it gone?

Yes, I do look at the official history of vaccination with a jaundiced eye. The greatest successes… Well, it seems inarguable that vaccination has created enormous health benefits. Polio and smallpox – gone. But has this been entirely due to vaccination – possibly? I am yet to be convinced.

In truth, I find the entire area of vaccination quite fascinating. But the problem, the great problem, is that even by writing this blog, I will have said several things that cannot be said.

To me, these are just facts, and to state them is simply part of valid scientific questioning. For some reason, I am not entirely sure why, to question any “fact” about vaccination is to be flung into the outer darkness. People get very, very, angry.

They close their minds and they get polarised. Some will almost certainly take parts of this blog out of context and use it to attack me.

Really? Will this ‘kill thousands of kids’?

I don’t really know how to open the debate out into something sensible. Something scientific, something questioning and positive. Screeching at people that they simply don’t understand “science” is not a good approach.

In addition, yelling that they are “killing thousands of children” is not a way to conduct a debate.

I feel that I do understand “science”, whatever that means exactly. Or at least I understand the scientific method. Which primarily consists of questioning everything – and feeling free do to do.

One thing I do know is that anyone who states that the science is settled, and inarguable, and all the experts agree, and must, therefore, be right, clearly does not understand anything about science.