Fasting is as old as the hills of ancient Greece. Many doctors and dietitians still dismiss it as a fad. It is proving its worth in modern medicine’s arsenal to beat type 2 diabetes.

In its planned intermittent incarnation, fasting may help to reverse type 2 diabetes, a condition that is now epidemic across the globe. That’s according to Canadian doctors in the journal, BMJ Case Reports. Three male patients in their care were able to cut out the need for insulin treatment altogether after a period of planned intermittent fasting.

One of the co-authors is Canadian nephrologist (kidney specialist), Dr Jason Fung, of the Department of Medicine at Scarborough General Hospital in Ontario. Fung is an expert in fasting interventions to reverse type 2 diabetes.

He and his co-authors readily admit to the limitations of the case reports: small in number and men only. The implications, however, are “huge”, Fung says

The patients were all from the Intensive Dietary Management program, of which Fung is medical director and co-founder.

Around one in 10 people in the US and Canada has type 2 diabetes. The metabolic condition is associated with other serious, life-threatening illness. Complications include blindness, kidney failure, limb amputation and premature death.

Estimates are that in the US alone, type 2 diabetes costs the economy US$245 billion a year. Experts say that lifestyle changes are key to managing the disease. However, these changes themselves cannot always control blood glucose levels.

And while bariatric surgery (a gastric band) is effective, it is not without risk, say the authors.

Stopping diabetes in its tracks

Drugs can manage the symptoms and help to stave off complications but cannot stop the disease in its tracks, they say.

In the study, three men, aged between 40 and 67, tried out planned intermittent fasting to see if it might ease their symptoms of type 2 diabetes.

They were taking various drugs to control their disease as well as daily units of insulin. In addition to type 2 diabetes, the three men had hypertension (high blood pressure) and high cholesterol.

Two patients fasted on alternate days for a full 24 hours. The third fasted for three days a week. On fast days they were allowed to drink very-low-calorie drinks, such as tea/coffee, water or broth. They also ate one very-low-calorie meal in the evening.

Before embarking on their fasting regime, the men attended a six-hour long nutritional training seminar. That included information on how diabetes develops, the role of insulin resistance and the impact on the body. It also covered healthy eating and how to manage diabetes with diet and therapeutic fasting.

The patients adhered to their eating and fasting regimens for around 10 months after which fasting blood glucose. Thereafter, researchers remeasured the men’s average blood glucose (HbA1c), weight, and waist circumference.

All three men were able to stop injecting themselves with insulin within a month of starting their fasting schedule. In one case this took only five days. Two were also able to stop taking all their other diabetic drugs. The third discontinued three out of the four drugs he was taking.

Click here to read: Green tea: Fung on how it boosts fasting

They all lost weight (by 10-18%). They reduced their fasting and average blood glucose readings. The authors speculate that this may help lower the risk of future complications.

Feedback was positive and adherence was high. All three patients said that they were able to stick to their dietary schedule without too much difficulty.

This is an observational study and refers to just three cases – all in men. As such, the researchers are aware that it is not possible to draw firm conclusions on the wider success or otherwise for treating type 2 diabetes.

“The use of a therapeutic fasting regimen for treatment of [type 2 diabetes] is virtually unheard of,” write the authors.

The three cases show that 24-hour fasting regimens can significantly reverse or eliminate the need for diabetic medication.

Fung calls intermittent fasting “the ancient secret of health”. It is ancient because people have practised it throughout all of human history. It’s a secret because most people have “virtually forgotten this powerful habit”, he says.

Planned intermittent fasting is ” new and innovative” as a treatment intervention in type 2 diabetes, he says. For this reason, the medical literature usually starts with case reports, case series and then larger scale samples.

Fung and his co-authors intended to do a larger retrospective review. However, two ethics review boards denied their request. The researchers, therefore, had to do a case series instead and began almost two years ago. 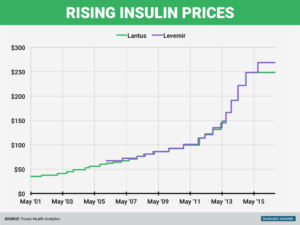 Despite the small number of patients (three) and men only, Fung is upbeat about the implications.

The three men were all taking an inconvenient, expensive drug (insulin) that would make them gain weight, he says. (See the rising prices, right.)

“We were able to prove that the men did not actually need (the insulin)”, Fung says, “and that it was not the correct treatment for them.

Instead, the patients received a simple, free, dietary option – one that none of their physicians offered to them.

Yet insulin remains the current treatment that the vast majority of doctors worldwide, including endocrinologists, still prescribe. The case report is “a proof of concept that fasting can be a successful therapeutic intervention”, Fung says.

“Imagine having a diagnosis of type 2 diabetes for 25 years and taking 70 units of insulin per day,” he says. “Then you do a simple, time-tested dietary strategy and doctors classify you as non-diabetic after three months.

“The longest time to come off all insulin was 18 days in this series.”

He also makes the point that intermittent fasting says nothing about what the patient eats. You could be a vegetarian, on LCHF, keto, paleo, or eat the SAD (Standard American Diet), he says. And if you are overweight, you would “still be better off with fasting”, he says.

And since planned intermittent fasting is a free treatment, the public health implications are massive, Fung says:

“Imagine the cost savings to a nation that can successfully implement it.”