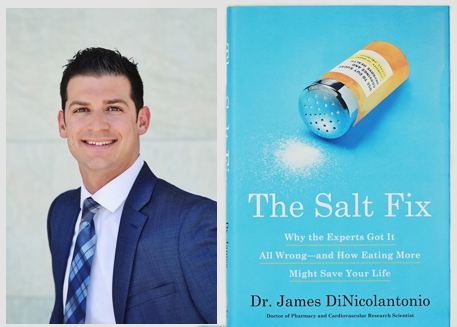 Salt – are you getting too little or too much of that other “white stuff’? Dr James DiNicolantonio is a US cardiovascular research scientist, up next in Foodmed.net’s Vital Signs Q&A series of personality profiles. He is also author of The Salt Fix. It’s a seminal book that dispels low-salt myth.

DiNicolantonio is a doctor of pharmacy at Saint Luke’s Mid America Heart Institute in Kansas City, Missouri, an associate editor of British Medical Journal’s (BMJ) Open Heart and a mythbuster of note.

In his book, he provides new understanding of salt’s essential role in  health. He shows that salt may be a solution to, not a cause of, chronic disease crises facing the planet.

DiNicolantonio is also author and co-author of more than 200 publications in the literature.

I originally wanted to be a lawyer.  I always loved to study and argue, so it made perfect sense to me at the ripe age of 10.  My parents always said I’d make a great lawyer but ultimately pushed me towards pharmacy.

Pharmacy has been in my family since my great-grandfather graduated from the University at Buffalo as a pharmacist in the early 1930s.  My mom and brother are both pharmacists.  I always wanted to help people in some way and I figured this was a great career to do that.

It’s based on what I am passionate about.  I try and research topics that are important to public health and my goal is to try and make a difference in people’s lives.  If someone gets just one “aha!” moment from my research and improves their health then it was all worth it.

When I was working as a community pharmacist, patients kept telling me that their doctors had diagnosed them with high blood pressure and told them to remove all the salt from their diet. The problem was that after they did this they felt like crap.  They were having muscle spasms, muscle cramps, heart palpitations, fatigue, dizziness, especially when standing from a seated position. I saw firsthand how the low-salt advice was wrecking the quality of life of my patients.

I told them to go back to their doctor and let them know how they were feeling. And many times the doctor would tell them to add some salt back to their diet. If they had low blood sodium levels, doctors would even cut down the dose of prescribed diuretic for high blood pressure. Or even completely eliminate it. Almost immediately, all symptoms of salt deficiency would go away as soon as they integrated salt back into their diet. My experience was telling me that the low-salt advice was harmful to people. So, I knew I had to research and write a book.

For my first book, I am happy with how it is doing.  What has been really great is all the emails and messages I have received from people. They were suffering from symptoms of salt deficiency but never knew what was wrong with them. They say how quickly their health improved after integrating salt back into their diet.

My message has never been to consume high amounts of salt. But many times, some cardiologists don’t fully understand that I am simply against consciously restricting salt intake. And my main message is to use real salt to eat real food.  Once they understand my actual message, many cardiologists are more receptive.

I think there’s so much nutritional controversy because the studies we have are flawed. It’s also because nutrition is a mix of art and science. People are different and what works for one person might not work for another.

There is also a lot of industry money at stake. This can bias the evidence and promote the wrong public health messages .

Yes, but not in the way you would think.  I was bench pressing about six years ago at home and tore my pectoralis tendon pretty bad.  I never had surgery to repair it. So, my ability to lift heavy weights with my chest is gone.  I could no longer lift heavy weights and get away with eating a high-carbohydrate diet. After that happened, I really had to understand what a healthy diet is.

No, but soon after I lost my ability to lift heavy weights I had a little trouble keeping a flat stomach.

I normally start early (5:30 AM) with a coffee and a little heavy cream. And I don’t normally eat anything until lunch at around 11 AM.

My lunch is usually a burrito bowl at Chipotle with beans, peppers and onions, pork, chicken, salsa, corn, cheese, and lettuce.  For dinner, it can vary from pork chops, pastured eggs, and spinach, to salmon and cooked and cooled potatoes.  I generally have one small bowl of organic popcorn at night. And maybe one or two dark chocolate squares with some almonds each day.  I drink mineral water each day too.

I don’t actually measure my salt intake but I’m probably getting around two teaspoons per day.  I normally only work out once or twice a week and will generally use 1/3rd to 1/2 teaspoonful of Redmond Real Salt before my workouts. And I salt my food to taste.

Yes. I drink high magnesium/calcium mineral water, hydrolyzed collagen protein, fish oil and a little vitamin D in the winter. I also make sure to get good sun exposure during warmer weather without burning.

I generally do a full-body workout once or twice a week. I can’t lift very heavy with my chest but I still lift moderate-heavy weights and do body-weight exercises.

Probably not doing much cardio.  I go in spurts.  For six months, I may not jog at all and then for six months I may jog every other day.

One day in the pharmacy, a single mom patient of mine told me she had suffered a stroke. And that if she had another one she wouldn’t be able to take care of her kids.  I asked her three questions:  Do you snore at night? Do you wake up in the middle of the night? And do you feel well-rested in the morning? After she answered those questions, I told her that she might have sleep apnea.

A few weeks later, she came into the pharmacy and told me that her doctor said she had one of the worst cases of sleep apnea they had ever seen. She was so thankful for what I had done.  Right then, I knew that I could make a real impact in people’s lives and it was the greatest feeling in the world.

Yes. Dr Dmitri Vasin, a nephrologist and one of the smartest doctors I know. And Dr Marty Strauss, who really opened my eyes to the lack of evidence-based medicine.  I am grateful for all of them.

There have been several, but by far and away Good Calories Bad Calories (by Gary Taubes) was the most impactful.

Click here to read: Taubes and the case against sugar

I’m focusing on researching and writing a second book

My best hobby is time with my wife and kids.  They are my everything.

My dad always told me that if I worked hard I could accomplish anything.  That always stuck with me, even today.

I’ve had some pretty crazy moments when I was younger behind the wheel.  I’ll just leave it at that.

I wouldn’t change anything.  Any mistakes I’ve made have led me here and I’m pretty happy where I am.

When I ask for a sleeve on my coffee, don’t get one and I end up burning my hands walking into work with my coffee.

Letting down the people I love the most in this world.

I hope that my work makes a true difference in people’s lives.