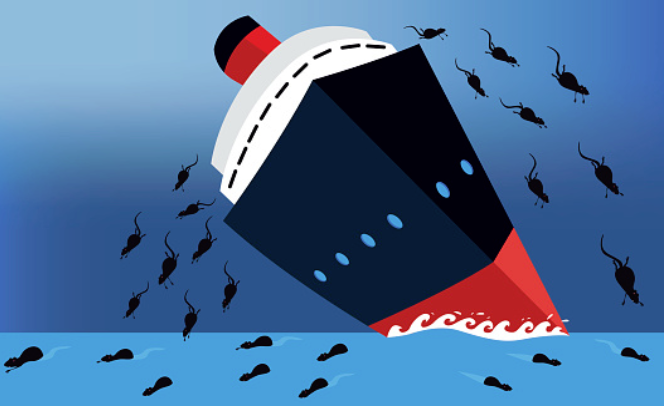 The Australian Health Practitioner Regulation Agency (AHPRA) appears to be collapsing. It is facing mass resignations from its medical boards nationally. There were more than 90% in Tasmania alone. The only states that don’t show significant resignations are New South Wales and Queensland. Both declined to work under AHPRA’s jurisdiction.

Resignations follow in the wake of the lifetime ban it slapped on orthopaedic surgeon Dr Gary Fettke in 2016. AHPRA does not want Fettke telling patients with diabetes not to eat sugar. Resignations also follow the ongoing Senate Inquiry into AHPRA’s secretive medical complaints process. The inquiry heard shocking details of endemic bullying and harassment of doctors in Australia’s medical profession. However, it just may be Fettke’s ban that has made so many rats abandon AHPRA’s sinking ship.

AHPRA’s three-yearly call for applications to fill vacancies shows unusually large numbers since its inception in 2010. In Victoria, Tasmania, South Australia and Western Australia, there were 38 resignations out of 55 positions. Thus, at 69%, more than two-thirds of doctors in four states have jumped ship. In Tasmania, Fettke’s home state, there were 11 out of 12 resignations – a whopping 92%.

AHPRA downplayed the numbers in response to my questions. It would only say that vacancies “become available as part of a scheduled cycle every three years”. AHPRA also refused to comment on reasons for so many vacancies. And it wouldn’t comment on the timing of calls for applications that close on March 20 or how it distributed these to members. Was it just coincidence that they publicised vacancies more widely only after the close of submissions to the Senate resumed hearing on March 17?

(Editor’s update: AHPRA replied again on March 21, insisting that there have been no mass resignations and the numbers are “not unusual”. It also claims to have “advertised widely to attract a wide field of applicants”.)

As well, AHPRA has refused to answer all my questions related to Fettke’s case, citing privacy rules. However, AHPRA has commented publicly – and negatively – on his case.

Before the ban, AHPRA investigated Fettke for more than two years after an anonymous dieititian lodged a complaint against him. The dietitian is a member of the self-regulated Dietitians Association of Australia (DAA). She also objected to Fettke telling patients with diabetes to reduce sugar and processed carbohydrates – both of which are now mainstream recommendations.

DAA itself is under intense public scrutiny for compromising links with food industries and for the advice it dishes out. As with dietitians’ associations in other countries, DAA has attempted to appropriate for itself and its members a virtual monopoly on dishing out dietary advice to the public. It has a special antipathy towards doctors, such as Fettke, who give dietary advice that differs from industry-led dietary guidelines.

AHPRA appears to condone that position and collude with dietitians. In a public statement last year, it spoke of the “expectation” that all doctors would give “appropriate” dietary advice.

AHPRA probably did itself no favours by adding an odd element to its ban on Fettke. Fettke promotes low-carbohydrate, healthy-fats (LCHF) diets to reduce the risk of limb amputation for diabetes. AHPRA said that even if LCHF becomes mainstream in future, he still can’t advise patients on nutrition.

That added to global outrage at the action against Fettke. Legal experts have called AHPRA’s handling of the case against Fettke Kafkaesque and a real, live kangaroo court.  Claire Deeks, enrolled barrister and solicitor of the High Court of New Zealand, said that Fettke was the victim of “gross injustice”.

Fettke gave a powerful submission to the Senate Inquiry into AHPRA’s complaints processes. He described bullying and harassment he experienced from doctor colleagues. He testified about the devastating effects of AHPRA’s investigation on him professionally and personally.

His wife, Belinda, initially became his “voice” and set up an I Support Gary Fettke Facebook Page to continue his views. Fettke has since bounced back from the initial shock of the ban. He has now chosen simply to ignore it. However, he only did so after asking AHPRA to clarify the ban in detail. To date, AHPRA has not responded. Fettke continues to talk to patients about nutrition and to give presentations by invitation at conferences abroad.

Fettke spoke at the recent and hugely successful, international Low-Carb Breckenridge 2017 conference in the US.

“If you don’t tell people that sound nutrition has a central role in their health, you are failing in your duty of care,” Fettke said.

Fettke has said that he only ever talks to patients about the concepts of eating to prevent the worst complications of diabetes.  And, of course, he only dispenses advice that is evidence-based.  He does not give meal plans and usually uses the analogy of the right fuel in a vehicle’s engine.

The question, therefore, becomes what AHPRA and Fettke consider the “right” or “appropriate” fuel.

“The fuel we have recommended for the past 40 years clearly isn’t working,” Fettke said. “I see patients every week who have to have bits of their anatomy amputated. I can’t wait for AHPRA to catch up.”

“There is no question that your car will run more efficiently if you use the right fuel. After all, you wouldn’t put a little diesel in the petrol.”

Real food, by definition, is low-carb, healthy-fat, Fettke said. He tells patients to avoid sugar and highly processed foods and not be afraid of healthy fats. If they need further information, he refers them to dietitians who know about optimum nutrition.

He dismisses out-of-hand criticism of conflict of interest (COI) for referring patients to the Nutrition for Life dietitians’ clinic. He and Belinda set up the clinic in 2014 at significant personal expense: Aus$700,000.

The clinic is nothing more than the common “vertical integration”, which many doctors practise, he said. For example, doctors routinely employ physiotherapists and dietitians in their own practices. They also refer to radiology and pathology services, for which they receive kickbacks.

Since he set up the clinic, Fettke has been one of 88 referring doctors, in 28 out of 1100 clients. “That’s hardly over-servicing,” he said.

He and his wife have not profited from the clinic. “We are proud of the vested interest we have in our community’s health.  And we receive no financial gain from this healthcare model,” Belinda told me.

Fettke remains a mentor to the dietitians, but only from an educational viewpoint, she said.  And he has always declared his COI to patients.

Last year, Fettke attempted to resolve the impasse by meeting the Chair of AHPRA’s Medical Board, Dr Andrew Mulcahy, accompanied by Belinda. However, Mulcahy refused to meet with Belinda present. Thus, and probably not all that surprisingly, the meeting proved fruitless.

Fettke has firm opinions on AHPRA and why the rats are abandoning the sinking ship. “Those who serve on AHPRA’s medical board have good intentions but the process is fatally flawed,” he said.

AHPRA’s website shows that board members must spend a day each month attending meetings. They must also read 1000 documents to prepare for these meetings. For that, they are paid $627 monthly.

AHPRA receives 10,000 notifications (complaints) annually, of which 53% are related to medicine. AHPRA also has 180 investigators considering complaints. Of those, 42 have some health background, 23 have nursing backgrounds and only four have some degree of medical background. The rest are community workers. That’s from a supplementary report, which AHPRA CEO Dr Martin Fletcher submitted to the Senate Inquiry last year.

Thus, investigators without legal qualifications are interpreting and implementing National Law. “Anecdotally, I think it’s fair to say that this system is fatally flawed,” Fettke said.

The Senate Inquiry has shone a light straight into the darkness of AHPRA’s secretive processes, he said. It found that these contradict all principles of natural justice.

Fettke and his wife have not referred publicly to medical board members by name. However, it’s easy enough for anyone to find the names on a public register. It is likely that these doctors are feeling increasingly uncomfortable in the Senate Inquiry’s very bright, very public spotlight.

Of course, that raises the question why the rats are only now abandoning the sinking ship. After all, board members have participated for years in processes that manifestly contradict principles of natural justice.

Fettke has openly stated his view of AHPRA:

“I respect the police and common law for processes which lawmakers developed over hundreds of years. They have tested these processes under natural justice.

“I don’t respect AHPRA for the exact opposite reasons.”