This is the final of a two-part series on the strange case of Australian orthopaedic surgeon Dr Gary Fettke. The country’s medical regulatory body has banned him for life from talking to patients about their sugar intake. Fettke says that he just wants to save patients’ limbs and lives. Senators have come to his aid in an Australian Senate Inquiry and wife Belinda speaks up when Fettke feels he can’t speak out. Here, they look at anomalies in AHPRA’s case against Fettke.

On November 16, 2016, the Australian Health Practitioner Regulation Agency (AHPRA) issued an ambiguous statement relating to Dr Gary Fettke. AHPRA said that by law it could not disclose details of Fettke’s case unless he gave permission. However, AHPRA then proceeded to do just that: disclose details. Not surprisingly, senators conducting an inquiry into AHPRA’s medical complaints process were none too happy with that.

The statement contained cherry-picked sections of AHPRA’s Medical Board’s code of conduct for doctors, including that it: 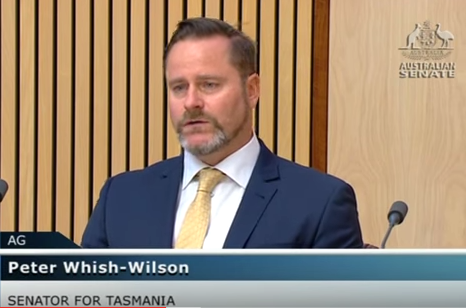 “You are not supposed to be making public statements about him yet in a sense you are.”

Fletcher, however, disagreed. He said that AHPRA was just responding to “misinformation” about the “caution” it had given to Fettke. He said that the media had incorrectly reported it as a “gag” or “ban”. Click here to read AHPRA’s full statement.

He asked Fletcher: “Can you understand that giving a busy surgeon an hour to actually know about this and then speak to his lawyers and give you an informed decision on whether he should or should not release the documents is unfair?”

Whish-Wilson reminded Fletcher that Fettke had Freedom of Information (FOI) requests to AHPRA to release the documents. However, these FOI requests had failed. He said that it would have been more helpful if AHPRA had told the public about Fettke’s FOI requests in the statement. Instead, it had implied that Fettke was blocking the release of documents.

Fletcher said that he did not think that’s what AHPRA was implying.

Whish-Wilson and Senator Nick Xenophon questioned the route that AHPRA uses to decide whether a complaint is vexatious. Both senators described it as “labyrinthine”.

Whish-Wilson told Fletcher: “You have gone down a very long rabbit hole against a surgeon for essentially providing dietary advice to patients. Where is your jurisdiction? If you do not have it over dietitians, why are you pursuing this against a medical practitioner?”

Both senators said that the Dietitians Association of Australia (DAA) had obvious conflicts of interest with Fettke. They pointed out that Anonymous DAA dietitians had lodged complaints against Fettke. Thus, they questioned why that did not immediately raise flags of vexatious complaints.

Fletcher responded that the intention of a complaint “may not have been particularly honourable”. However, there may still be “an issue of patient safety”, he said. As a result, he wouldn’t consider it a vexatious complaint.

Xenophon said that it was common for doctors to advise obese patients on diet. It was also common knowledge that excess weight wasn’t good for patients.

He called it “trivial” for AHPRA to go after a medical practitioner who had advised a medically acceptable dietary programme. He questioned why AHPRA would go after a doctor “with guns blazing” if patients weren’t complaining.

“Don’t you have better things to do?” Xenophon asked.

Click here for a full transcript of the second hearing of the Parliament of Australia Senate Inquiry into AHPRA’s medical complaints process. Or watch the video of the Senate Inquiry.

Fettke says that AHPRA’s latest statement is “a smear and slanderous”. “How is it fair to ask me to give AHPRA permission to disclose documents relating to my case that I haven’t seen?”

He says that he has proof that AHPRA has “embellished at least and fabricated at worst” documentary evidence against him. He presented that evidence to AHPRA investigators but they ignored it.

Fettke has also described the stress of defending himself against AHPRA without knowing the evidence against him. “It’s like boxing shadows,” he said.

Consequently, in the wake of the Senate Inquiry, AHPRA faces a litany of credibility, legal and ethical issues in its actions against Fettke. It hasn’t helped itself by not acting against doctors and other health professionals under its jurisdiction who routinely give nutrition advice, including LCHF.

In its most recent media release, AHPRA said that it expected registered medical practitioners to provide “appropriate dietary advice to patients when this is indicated”. Thus, its action against Fettke is inconsistent, say critics.

Click here to read: KENDRICK: SWEDEN GETS IT RIGHT WITH ‘IDIOT’ DIETITIANS

AHPRA has also reportedly gone after Fettke for being “disrespectful” towards other health practitioners. However, he has strenuously denied that.

The problem for AHPRA is that it hasn’t acted against doctors, nurses and midwives under its jurisdiction who make defamatory comments about Fettke on social media. Furthermore, these include admin members of a particularly toxic Facebook hate page, one of whom actually works for the pharmaceutical industry.

Consequently, concerns about AHPRA’s processes are not new. Xenophon called for a Senate inquiry in 2015. He said that AHPRA was “all about protecting a closed shop”, not best standards of patient care.

Top Sydney neurosurgeon Dr Charlie Teo also backed Xenophon’s call at the time.  Teo told of a culture of bullying in the profession that went “right to the top”. He said that it was “destroying the lives of doctors and their families”.

Critics of AHPRA –  they are many and growing – have called it a “star chamber”. That’s a reference to legal antics of an ancient high court of England that King Henry VII established in 1487 to break the power of the landed gentry. The English parliament abolished it in 1641 for abuses of power.

Brukner is professor of sports science at La Trobe University and the Australian cricket team doctor. He says that AHPRA’s ban doesn’t make it clear which doctors are and are not allowed to give nutrition advice.

Although doctors receive little nutrition education as medical students, Brukner says that they all receive equal amounts of nutrition training. Some, such as Fettke, go on to “explore the science behind nutrition more fully”.

The field of nutrition is going through an interesting time, Brukner says, and this is challenging some long-held beliefs. As well, many unqualified nutrition “gurus” are giving advice about what we should and should not eat.

Thus, it must surely be preferable for a doctor to give nutrition advice, not unqualified individuals, Brukner says.

He said that he has heard Fettke speak on nutrition at conferences and was impressed with his  depth of scientific knowledge and passion for patients’ welfare.

As well, experts have estimated the number of people with pre-diabetes and at high risk of developing Type 2 diabetes to be around 2 million.

Brukner says that the authorities should encourage doctors to give lifestyle advice in an attempt to reduce the rapidly increasing numbers of Australians suffering from obesity and Type 2 diabetes.

On her Facebook page, Belinda Fettke has posted An opinion ‘peace’ on vested interests. In it, she rejects AHPRA’s claim that Fettke hid a conflict of interest from patients relating to a private dietitians’ clinic he set up.

She says that he always told patients about his connection with Nutrition for Life clinic. Especially relevant is that he has declared that interest openly in every public lecture and on social media platforms. He is also pictured and named on the Nutrition for Life website as co-founder.

In the “caution” email to Fettke, AHPRA accuses him of  “failure to disclose or properly manage a conflict of interest (eg receiving a benefit for recommending a product or service).”

Belinda points out that Nutrition for Life did not exist when the original anonymous dietitian complained  in June 2014. Thus, the conflict of interest charge does not apply. As well, if AHPRA investigators had bothered to do an audit during its 832-day investigation of Fettke they would have found that:

“If AHPRA wants to hang the tag ‘vested Interest’ on Gary for his involvement with Nutrition for Life,  so be it,” she says. “We are proud to have a vested interest in our community’s health. We are also proud to have put our time, energy and money into something that we believe to be very special.

“Why? Because we have nothing to hide.”