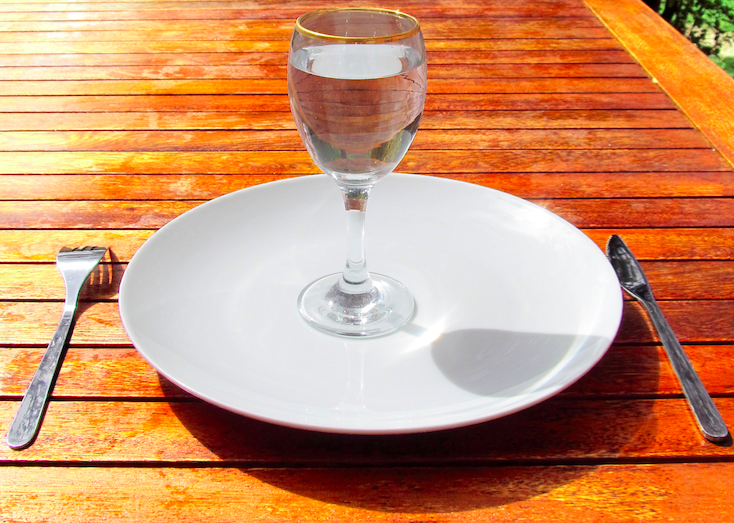 I’m not going out on a religious limb when I say this book will be the “bible” of fasting.

The sub-title is Heal Your Body Through Intermittent, Alternate-Day, and Extended Fasting. It is well-written, reader-friendly and delivers on all promises. It should be in every home. Here’s why:

Part I covers a brief history of fasting, myth busting and the benefits of fasting. The benefits are legion and include alleviation of obesity, type two diabetes, heart disease, cancer and Alzheimer’s. Alzheimer’s is so prevalent these days that doctors are calling it “type 3 diabetes” because of the documented link with diet. 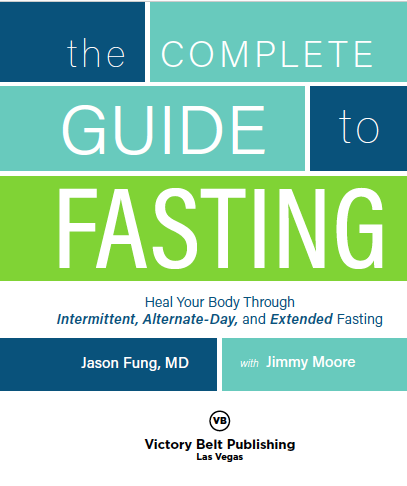 In Part II, the authors present different kinds of fasts, and best practices for intermittent and extended fasting. Part III is a rich resource of fasting fluids and protocols for 24- to 42-hour fasts, and  seven- to 14-day fasts.

Part IV dishes up delicious recipes. These remind you that low-carbohydrate, high-fat (LCHF) foods can be as tasty as they are satiating.

But it is the authors’ personal stories that are the real inspiration and power behind this book. In particular, Moore details the many lessons he learned in his battle against obesity, and as a newcomer to fasting.

In effect, Moore says fasting helps you to “reclaim your hunger for what it is”. In that way, hunger “no longer dictates what you put in your mouth”.

Along the way, Fung and Moore indulge in some mega fasting myth-busting. They devour residual fears you may have – and that many doctors and dietitians still stoke – about voluntarily depriving yourself of food.

One fear driver is the mistaken belief that fasting is starving. The terms are not interchangeable, says Fung. Fasting and starving “live on opposite sides of the world”. It is the difference between “recreational running and running because a lion is chasing you”.

Other myths are that therapeutic fasting makes you burn muscle, causes low blood sugar, makes you overeat, deprives your body of nutrients and is just plain nuts. That’s all unscientific nonsense, as the book makes clear.

From an evolutionary viewpoint, Fung says three meals a day and snacking throughout are not required  for survival or good health.

Fasting is ancient – as old as the hills of ancient Greece. And as 15th Century Swiss physician and botanist Paracelsus once memorably said: “Fasting is the greatest remedy – the physician within.”

Paracelsus also presciently said medicine is art as much as science. “It does not consist of compounding pills and plasters; it deals with the very processes of life, which must be understood before they may be guided.”

That thinking pervades this book.

A critical distinction in fasting is the voluntary aspect. It can be done for any period, from a few hours to months on end. You can begin and end  a fast at any time, says Fung.

He says fasting should be, and actually  is, part of everyday life. The word “breakfast”, implicitly acknowledges that fasting, “far from some sort of cruel and unusual punishment”, is something people do daily.

He and Moore peel back the layers to reveal why fasting has become a “forbidden secret”, especially about weight loss. They say the “experts” have forgotten its power as a dietary therapy.

Fasting enjoyed a brief resurgence in the medical literature in the early 1900s. In the Journal of Biological Chemistry in 1915, researchers describe fasting as “a perfectly safe, harmless, and effective method” for weight loss.

Yet despite its long traditions, advantages, and effectiveness, fasting as a therapeutic tool became extinct for the last 30 or more years.

“Even its very mention tends to bring ridicule,” says Fung. Yet it is a “very straightforward idea”.  If eating too much causes metabolic diseases, such as type 2 diabetes, the logical solution is to eat little.

“What could be simpler?” Fung asks. What indeed?

So why has fasting acquitted such a frightening reputation? Fung and Moore finger the usual suspects.

Fasting is bad for business, they say.  It’s hard to sell food to people who are not eating. (It’s also hard to prescribe drugs to healthy people – the push to give statins to otherwise healthy people notwithstanding).

“Through the power of advertising, big food companies have slowly changed how we think of fasting,” Fung says. “There is no correlation whatsoever between eating regular meals, grazing and good health.

The “truth is the exact opposite.”

In this book, Fung and Moore take you on a remarkable journey to reveal why fasting really is powerful. They show you ways to do it safely and effectively.

Fung explains why he strayed from the conventional medical to prescribing intensive dietary strategies. And why a main “meal” on his menu of therapies is now no food at all – in other words, fasting.

His story is a riveting, fascinating and eminently evidence-based read. Along the way, he points to a terminal weakness that is another reason for fasting’s fall from its pedestal: doctors who don’t know anything about nutrition

Fung says with admirable restraint that  medical schools don’t cover nutrition extensively. Most spend a bare minimum of time teaching nutrition. That was his experience at the University of Toronto where he studied medicine, and the University of California, Los Angeles, where he later specialised in nephrology,

In his nine years of formal medical education, Fung estimates he had just four hours of nutrition lectures. As a result, he emerged from medical school with “no more than a passing interest in nutrition until the mid-2000s”. 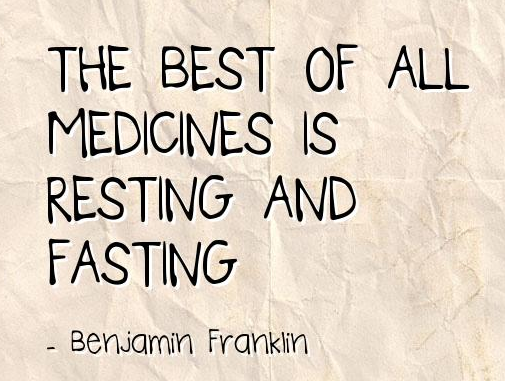 If ever there were a dereliction of duty by medical school lecturers, that’s one.

At the time, the Atkins diet that promoted low-carb eating was popular. Like most conventionally trained physicians, Fung dismissed it out of hand.

He believed that it was dangerous – that the arteries of all those who went on Atkins would “pay the price”.

Teetering ever on the periphery of his consciousness was evidence on low-carb diets. It started appearing in the New England Journal of Medicine”, which he calls “the most prestigious medical journal in the world”.

These studies included randomised controlled trials. They all came to the same “startling conclusion”: that the low-carb diet was significantly better than low-fat for weight loss.

More disconcerting was that all important risk factors for cardiovascular disease — cholesterol, blood sugar and blood pressure — significantly improved on the low-carb diet.

This was “a puzzle, a real conundrum” for Fung that began his journey.

Along that journey, he had to confront a sickening reality: he had been treating his obese, type 2 diabetic patients wrongly for decades. He made them fatter, sicker and more reliant on drugs than when they started out with him.

For any doctor who puts patients before profits, that’s a horrifying realisation. 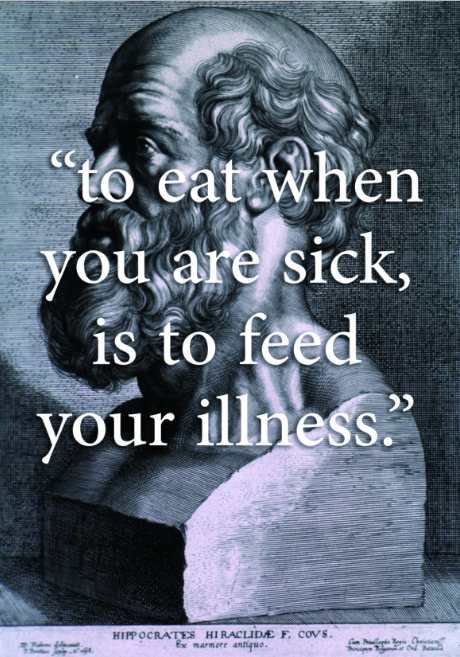 Fortunately for his patients, Fung did what any good scientist does when confronted with the evidence that contradicts a belief, no matter how strongly held. He changed his mind.

Patients of other doctors  and dietitians have not been so lucky.

Fung began intensive study of nutrition. His focus is now the etiology of obesity, that it is a hormonal, rather than a caloric imbalance. He looks at the devastating role of insulin, a fat-storage hormone, in the pandemics of obesity, diabetes and other chronic diseases of lifestyle.

In 2012, Fung established the Intensive Dietary Management Program that has a unique focus on diet as a treatment for the twin problems of obesity and type 2 diabetes. In time, he added fasting, both intermittent and for longer periods, to his therapeutic protocols.

Moore is the bestselling co-author with world-renowned US LCHF expert Dr Eric Westman of The Ketogenic Cookbook, Keto Clarity, and Cholesterol Clarity. He is also the leading low-carb health blogger globally, and host of the longest-running health podcast, The Livin’ La Vida Low-Carb Show.

In a foreword quirkily titled Not just another f-word: my experiments with fasting,  Moore documents his painful, first-hand battles to lose weight by following conventional advice. Moore once weighed in at a whopping 410 lbs (186kg).

In 2004, he learned about low-carb, and was able to lose 180 lbs in just one year. He was  able to come off three prescription medications for high cholesterol, high blood pressure, and breathing problems

Adding fasting to his therapeutic mix helps him to maintain his weight loss. He has fasted for a few hours a day, building up to longer periods.

More says he is “still tweaking” his personal fasting protocol. He knows that he gets most benefit from longer fasts. He also knows that it is “incredibly important” not to fast during stressful times, “even when it’s happy stress”.

Robb Wolf, a former research biochemist and author of The Paleo Solution, is quoted in the book saying that fasting is a stress. “Whether it is a hormetic (beneficial) stress or potentially a detrimental stress is largely determined by what other life stressors are at play.”

Fung and Moore are messianic about fasting, but both are also realistic. They aren’t saying it’s a panacea for all ills. Or that it’s easy to do when food is all around you. They are saying that it is a safe, effective and natural way of taking back control of your health.