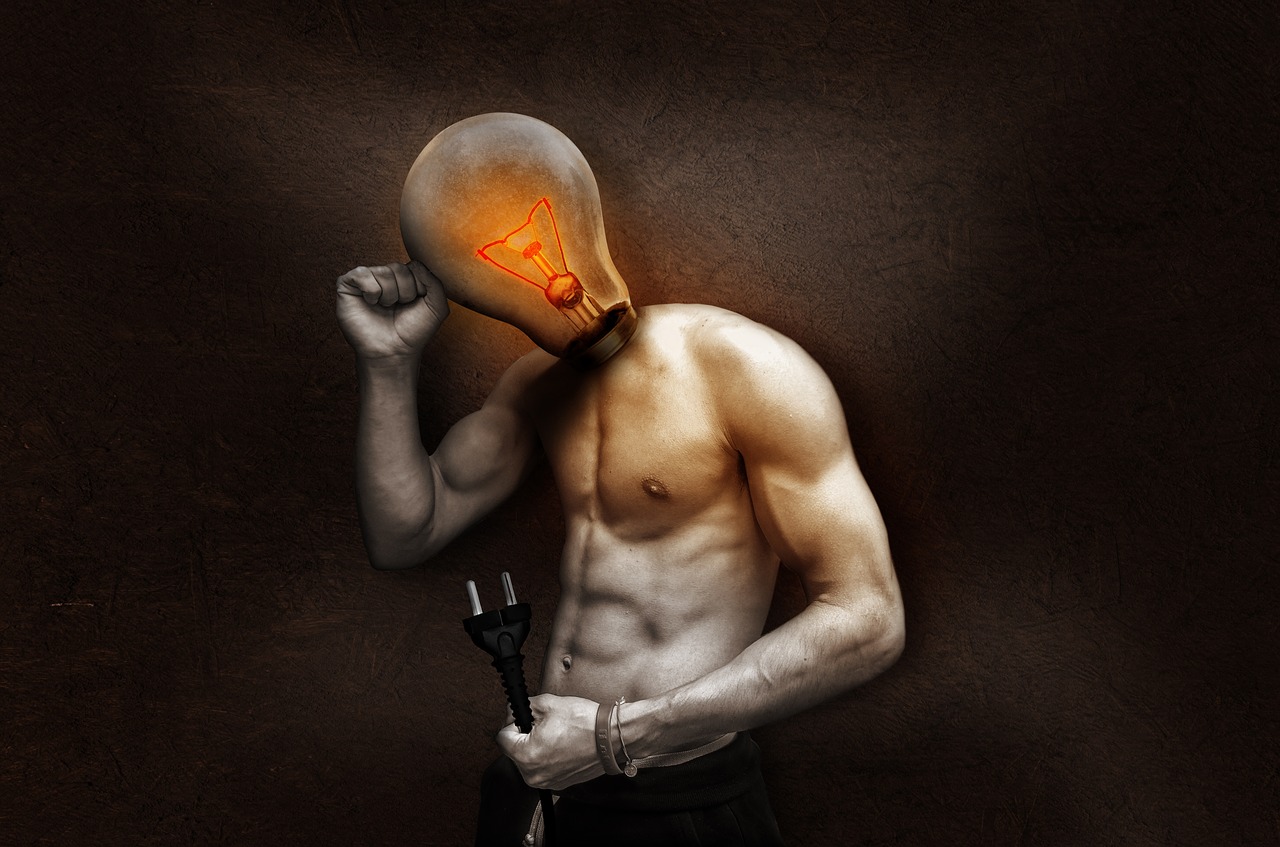 In Part One, South African doctors and dietitians say this small Canadian study isn’t worth the paper it’s written on. In the final Part Two, Foodmed.net  looks at why this research really does shed new light on weight loss and diabetes, despite what the critics say.

Though small and short-term, experts say it  is  part of a movement towards ‘pragmatic trials’ that blur the lines between science and clinical practice. The movement is a new paradigm to replace medicine that ‘no longer cures’ and instead produces ‘customers for the pharmaceutical industry’:

US paediatric endocrinologist Dr Jake Kushner is critical of a small Canadian study published in the SAMJ (South African Medical Journal). Click here to read the full text of A successful lifestyle intervention model replicated in diverse clinical settings.) However, he has very different perspectives compared to South African critics in Part One.

Kushner runs one of the world’s largest diabetes centres for children. His administrative priorities at Texas Children’s Hospital and Baylor College of Medicine focus on developing innovative new models of patient-centred care, education, and cutting-edge research.

His special interest is type 1 diabetes.

“LCHF allows some people who live with T1D to achieve differences in glucose control and quality of life that are simply stunning,” Kushner says.

These patient anecdotes “are encouraging. However, when it comes to the science to support low-carb diets for diabetes universally, “it’s not there yet”.

“ What I can say with great confidence is that the level of science out there in support of low-carb, high-fat for type 1 and 2 diabetes is currently low,” Kushner says.

“The lack of long-term follow-up in the Canadian study doesn’t allow objective evaluation of low carb approaches for the patient population.”

This deficiency may not be the fault of the researchers, he says. “There simply isn’t a lot of good science, because there hasn’t been the funding to do the right studies.”

Another view: NOAKES DISHES UP ‘REAL MEAL’ DIRT ON ‘DOCTORS OF DISEASE’

Random lifestyle interventions may work in the short term. The real challenge is getting people to lose weight permanently, Kushner says. The DPP (Diabetes Prevention Program) is a case in point.

It was a “gold-standard” RCT that involved massive resources – it was funded by the US National Institutes of Health, he says. The intervention was lifestyle: weight loss through diet largely around calorie restriction and exercise.

The DPP paper, originally published in the NEJM (New England Journal of Medicine), showed that participants had lost 7% of body weight. However, after 15 years follow-up, data showed that the cohort eventually merged with the control, with body weights that differed by slightly more than a single kilogram. In other words, the DPP intervention for weight loss proved not to be durable.

“The level of long follow-up is exquisitely important to evaluate an intervention,” Kushner says.

Kushner believes that NuSi, the Nutrition Science Initiative that is the brainchild of US science writer Gary Taubes, is poised to meet that need.

NuSi’s mission statement is to reduce the individual, social, and economic costs of obesity, diabetes, and their related diseases by improving the quality of science in nutrition and obesity research. It receives funding from the Laura and John Arnold Foundation and others.

The Foundation recently donated $1million to fund the first-ever controlled clinical trial to investigate whether a sugar-free diet could reverse the effects of the country’s most prevalent obesity-related disease, nonalcoholic fatty liver disease (NAFLD).

Must read: DIETARY GUIDELINES: WHY THEY MAKE YOU FATTER, SICKER

But back to the Canadian study. Do the flaws really outweigh the message on diabesity?

Not surprisingly, first author Mark vigorously disagrees. He says the study is simply “one of those good news, bad news stories”.

The bad news is there are many mixed messages on the optimal prescription for lifestyle intervention. This is confusing for practitioners, Mark says.

“Long-term, well-powered randomised studies will take decades. And one could argue that these studies are also prohibitively expensive,” he says.

“I’m not sure that the status quo way of doing research will give us the answer on optimal lifestyle prescription in a meaningful time frame.”

It’s even more frustrating he says, as we’ve known for decades from Reaven’s work  that insulin resistance is a disorder of carbohydrate metabolism. More generally, Dr John Ioannidis, Stanford University Professor of Medicine and of Health Research and Policy, suggests that evidence-based medicine has been “hijacked” and that in some contexts, “medicine” is doing more harm than good, says Mark.

“This resonates with Tim Noakes’ sentiment that status quo chronic disease management is the medicine of failure,” Mark says.

There’s “no question” that the Canadian study duration is a limitation, he says. The researchers say as much in their report. They also know from experience that there is only 20% to 30% long-term compliance with living a healthy lifestyle and achieving weight loss in the “real-world.

“These rates are similar to what you would expect with tobacco cessation programs,” Mark says. 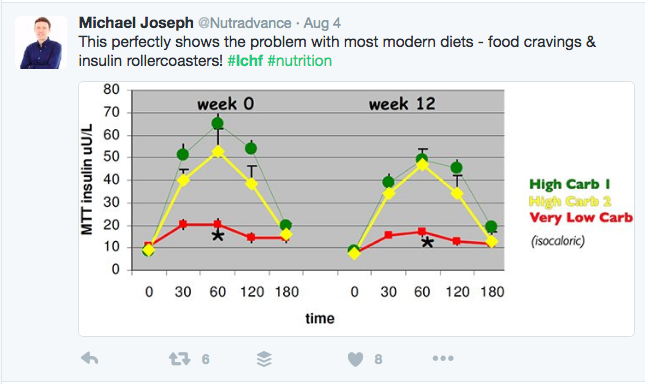 And of course, there’s usually always a trade-off in study design.

The more “controlled” the study, the less it applies to real-world clinical practice, Mark says. Experts have written extensively about this “trade-off”.  Among them is US public health specialist Dr Lawrence Green, author of Closing the chasm between research and practice: evidence of and for change published in The Health Promotion Journal of Australia in 2014.

The study has many strengths, among them no exclusion criteria. Anyone in these rural communities could participate in the therapeutic diet groups.

“These are regular people, with all sorts of different health conditions (diabetes, hypertension, alcoholism, ankylosing spondylitis, inflammatory bowel etc),” he says.  “These are also the sorts of people who usually never make it into a trial”.

Watching the impact of the therapeutic diet intervention on some of these autoimmune conditions was where things got “really interesting”, Mark says:  “There were huge improvements in symptoms.”

“So we started these group-based lifestyle interventions with obese, pre-diabetic and diabetic patient and tracked patient outcomes with the electronic medical record data – practice based evidence.
“We found that participants’ health improved. They reduced their need for medication and their control improved. And then things took off from there… “ 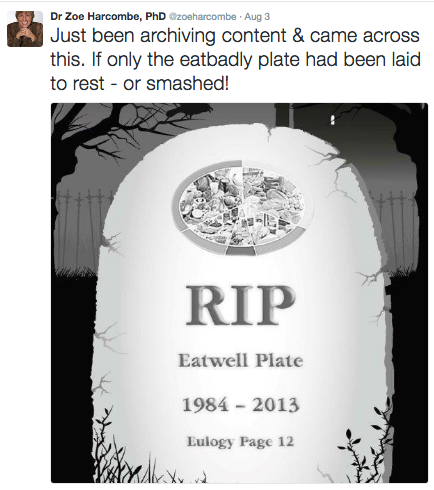 Mark says this study’s aim was simply to document the creation and spread of a lifestyle intervention model in rural British Columbia. There’s good reason why it doesn’t test any hypothesis: the authors didn’t set out to do a study.

“ Retrospectively, we could say this study aimed to test if current treatment guidelines for type II diabetes and pre-diabetes are effective,” Mark says.

“Our experience and data suggest that current guidelines are not working.”

Even if participants leave the intervention with nothing but an aversion to sugary foods, including sweetened soft drinks, fruit juices etc, “then as practitioners we’ve done pretty darn well”, Mark says.

An even bigger picture?

This study is an example of the power of “real-world science”.   It’s part of a growing movement of researchers and practitioners conducting, “pragmatic trials”, says Mark.

These are trials where the line between science and clinical practice becomes blurred.

Never was that more needed for weight loss and diabetes treatment.

“Interest in pragmatic trials is growing out of recognition that the current way evidence is generated and integrated into practice is not working,” Mark says.

It’s a clarion call for ‘real-world medicine’. It  may explain just why medical and dietetic establishment may be so keen to dismiss this study’s findings.

It is part of a seismic shift that threatens the very foundations on which medical and pharmaceutical professions build their obesity and diabetes businesses.

Noakes says conventional management of metabolic syndrome doesn’t work but “costs buckets”. The Canadian study offers a “no-cost solution based on low-carb, high-fat (LCHF) that  reverses the disease in a large proportion of those with the condition”.

He explains why this study conforms closely to LCHF practice, even in the weight loss period. In the study, the doctors instruct patients initially to restrict the amount of carbohydrate and fat they eat until they have reached their target weights, because carbohydrate restriction lowers blood insulin levels. This releases fat stores and makes them available for use as an energy source (since insulin prevents the mobilisation of fat for use as an energy fuel), he says.

“In this way, the low-carbohydrate diet for the initiation of weight loss is in fact a high-fat diet,” he says, “because the body does not know that the energy it is burning is coming from its own body fat stores, and not from ingested fat.”

The sole reason to eat fat during this period is simply to prevent excessive hunger and maintain satiety, because the body doesn’t need ingested fat as an energy source, Noakes says.

“In the obese, fat stores can provide more than enough energy to sustain life for weeks if not months without eating. Thus, there’s no reason to eat much fat during the initial weight loss period other than what is  required to maintain satiety.”

This also explains why a diet that simply reduces ingested calories without at the same time reducing carbohydrates (which stimulate insulin secretion) will not produce the same long-term outcomes (as LCHF is shown to do), he says. 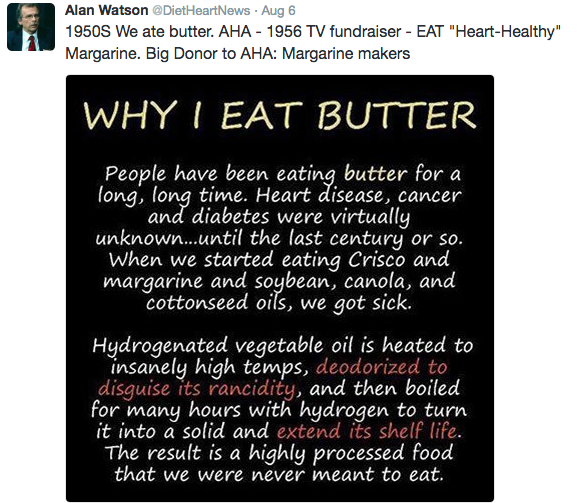 Of course the study is “weak” in terms of what you can conclude from it, Noakes says. It’s as if the authors have discovered penicillin but scientists say they  must wait for million dollar studies to prove that what we are observing is not simply a spontaneous cure.

“Thus, and  tragically, the study was a definitive test of the efficacy of penicillin.”

That single experiment subsequently repeated with a few successful outcomes was still enough to convince everyone, Noakes says. The analogy to the Canadian study is that the authors have shown that when you take normal Canadians off the diet dietitians tell them is “healthy”, they suddenly reverse their metabolic syndrome.

“This proves that the diet is the cause of the metabolic syndrome, just as the bacteria that penicillin disabled caused the policeman’s death,” he says.

Rather, it confirms the point, just as the policeman’s death did.

That logic seems “so incredibly simple”, Noakes says most people should be able to understand it. That’s whether or not they have a medical or dietetic degree.

The problem is medicine is “no longer about cures”, says Noakes. “It’s about producing customers for the pharmaceutical industry. It’s about Big Pharma’s corporate capture of medicine.”

Patients are dying daily because the dietary advice they are receiving is killing them,” he says.

“The evidence we presented provides  a cure for a large percentage of the people studied and with crucially, with no evidence for risk.

“That’s why it poses such a problem –  and evokes irrational, emotive responses from colleagues.”

Noakes says the Canadian study should be embraced for what it is.  He hopes it  will be the message from the authors.

“We really don’t have any time to wait – or waste. Just like the policeman, who sadly ran out of time.”