Low-carb, high-fat (LCHF) diets will give you a heart attack. At least, that’s what doctors who endorse the so-called diet-heart hypothesis will tell you. That hypothesis is on the menu at Footloose, a seminar on health and nutrition to be held in Reykjavik, Iceland on May 26. The hypothesis, for the lay person, is that fat in the diet equals fat in the arteries. It underpins the influential US dietary guidelines launched in the late 1970s and followed by most English-speaking countries thereafter.

Some experts say that the results of those guidelines on population health worldwide have been nothing short of catastrophic – global epidemics of obesity, diabetes and heart disease. One of the speakers on the stellar panel of international experts at Foodloose is Icelandic cardiologist Dr Axel Sigurdsson. In a blog here, he poses the question whether the popularity of LCHF will trigger another heart attack epidemic. He explains why, based on the evidence available at the time, he thinks it won’t. – Marika Sboros

Diets low in carbohydrate and high in fat (LCHF) have become increasingly popular lately. Many experts in the field of epidemiology and cardiovascular disease have expressed grave concern. They warn that this change in dietary pattern may increase the risk of heart disease.

Some have argued that LCHF poses a threat to public health in many countries around the globe.

A recent increase in butter consumption may reflect the magnitude of the problem and is by many considered alarming. Butter consumption hit a 44-year high in 2012, according to US government data, while margarine is at a 70-year low.

In Germany today, butter outsells margarine by a three-to-one margin, and the gap is widening. A similar increase in butter consumption is reported in Scandinavia and many other European countries.

Although butter fits well with an LCHF lifestyle, choosing butter may also reflect the fact that people are changing their perception of food and searching for healthier alternatives. They’re moving away from highly processed foods and artificial ingredients.

The question whether LCHF is harmful or not touches the core of our understanding of the causes of heart disease and the reasons for the so-called coronary heart disease (CHD) epidemic. That’s why this debate is both important and challenging. Let me tell you why so many specialists believe LCHF may be harmful. Then, maybe you can have your say on the issue.

For the past 60 years, CHD has been a major health concern. Although initially most prominent in high income countries, today over 80% of the world’s deaths from cardiovascular disease occur in low and middle-income countries. An estimated 17.3 million people died from cardiovascular diseases in 2008, representing 30% of all global deaths. Of these deaths, an estimated 7.3 million were due to CHD and 6.2 million were due to stroke.

The clinical presentation of CHD varies greatly. Sometimes it is a silent chronic disease that progresses slowly. In other cases it is sudden, unexpected and unpredictable. Through the decades, CHD has brought to an end the lives of many people in their prime. It has robbed wives of their husbands and husbands of their wives. It has tragically, without warning, robbed young children and adolescents of their parents.

Another view: WHY HEART FOUNDATIONS ARE OFF BEAT ON HEALTH!

The symptoms were often dramatic and devastating. A previously healthy person was suddenly hit by severe chest pain, commonly associated with serious irregularities of heart rhythm, often resulting in sudden death. Survivors often had to deal with the consequences of damage to large parts of their heart muscle, sometimes resulting in heart failure, severely compromised quality of life and a shortened life span.

Although still an important cause of death around the world, the death rate from CHD has declined in the US, Canada, Australia, New Zealand and all European countries. It is in the countries with the highest incidence that the greatest decline has occurred. Studies have reported up to 80% decline in mortality from CHD in the last 30 – 40 years in countries like the UK, Slovakia, Poland, Netherlands, Ireland, Finland, Iceland and Sweden.

A recent Swedish study indicates that CHD deaths are still falling, both among the old and the young. It is unclear how much of the decline in death rate from CHD is due to a reduction of the incidence of the disease and how much is due to improved survival of those affected. Obviously prognosis has improved and some studies have reported declining incidence of CHD.

Another question is whether the decreasing trend in CHD mortality is due to changes in major cardiovascular risk factors, better medical and surgical treatment, neither of these or both.

Many investigators have used the so-called IMPACT model to analyse the role of preventive measures versus treatment measures on the death rate from CHD. All these studies report that more than half of the mortality decline is attributable to reductions in major risk factors.

The Role of Diet

Although there are some differences, the interpretation of the data from countries where the IMPACT model has been used follows a common path. Lowering of blood cholesterol appears to be an important contributor to the decline in mortality from CHD in many of these studies. Therefore, dietary measures aimed at lowering blood cholesterol are usually highlighted by investigators. The Icelandic experience is a good example.

Icelandic investigators reported an 80% decline in death rate from CHD between 1981 and 2006. Based on the IMPACT model approximately 73% of the mortality decrease was attributable to risk factor reductions. Among these, a reduction in blood cholesterol played the biggest role, and appeared more important than reduction in smoking, lower blood pressure and less physical inactivity. Importantly, adverse trends were seen for obesity and diabetes, increasing mortality by 4% and 5% respectively”

The investigators concluded that: “The large fall in cholesterol between 1981 and 2006 reflects major changes in the Icelandic diet following the issue of Dietary Goals for Icelanders”.

These goals are very similar to the dietary goals for the US and most European countries. Let me quote the Icelandic paper again:

“The National policy is based in the dietary goals where the reduction of saturated fat, mainly from milk and dairy products, lamb and margarine, is greatly emphasised. The food policy and the dietary goals have greatly influenced nutrition education and awareness in the country”.

“Icelandic food supply data clearly demonstrate the subsequent changes. In the 1970s, the diet was characterised by high consumption of whole milk and dairy products, margarine, butter, lamb, mutton and fish. However, between 1981 and 2006 there was a 73% drop in whole milk and dairy consumption, and the supply of lamb and mutton decreased by 50%”.

“From the 1990s, the consumption of total fat in percent energy has decreased from 40% to 36%. But more importantly, the composition of fat has also changed from more saturated and trans-fatty acids to cis-unsaturated”.

Interestingly, while these changes occurred, the consumption  of refined sugars increased (sugared beverages in particular) and fish consumption decreased. So, although less total and saturated fat may have contributed to lowering of blood cholesterol among the Icelanders, it is obvious that many of the alterations in dietary habits between 1981 and 2006 were of negative nature. This is also reflected by the fact that overweight and obesity more than doubled during the same time period.

So, finally, here’s the point: If the decreased consumption of whole milk, dairy, lamb and mutton played such an important role in lowering cholesterol and reducing the death from CHD among the Icelandic people, LCHF must certainly pose a threat, but…. 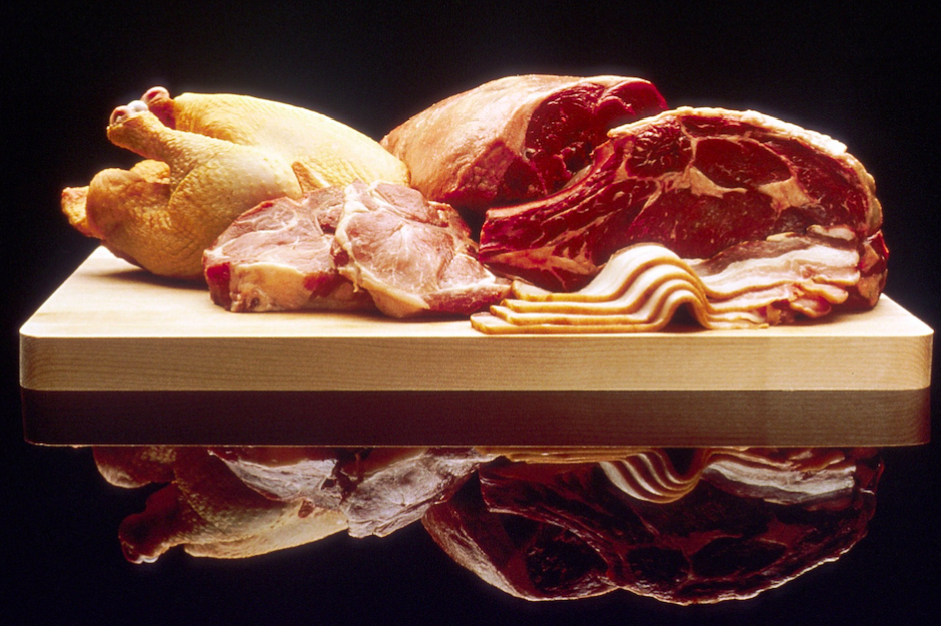 Through the years we have been led to believe that saturated fatty acids (SFA) elevate blood cholesterol. We have also been told that high cholesterol will increase the risk of heart disease. Therefore, it’s easy to assume that consuming SFA will increase the risk of heart disease. However, the problem is that the effects of SFA on cholesterol and different lipoproteins have been oversimplified. Furthermore, the epidemiological evidence linking saturated fats with CHD was weak from the beginning.

Although carbohydrates are less likely to elevate total and LDL-cholesterol, they often elevate triglycerides and lower HDL-cholesterol. These lipid changes may harbor negative cardiometabolic effects.

One of the first papers that advised decreased intake of SFA was published in 1961 by The American heart Association. Some of the support for this came from observational studies, including Ancel Keys’ Seven-Countries Study, which suggested a relationship between SFA intake and the risk of death from CHD.

Later, in the Nurses’ Health Study a greater ratio of polyunsaturated fatty acids (PUFA) to SFA was associated with lower risk of CHD. The Finnish Mental Hospital Study published 1979 found fewer deaths from CHD and lower rates of heart attacks in a hospital that administered dairy products in which SFA’s were replaced with PUFA’s, compared with regular SFA-containing dairy products. On the other hand, the intervention component of the Minnesota Coronary Survey did not show that increasing the amount of PUFA at the expense of SFA did result in less risk of CHD.

A systematic review of of the evidence supporting a causal link between various dietary factors and coronary heart disease was published in 2009. The pooled analysis from 43 randomised clinical trials showed that increased consumption of marine omega-3 fatty acids  and a Mediterranean diet pattern were each associated with a significantly lower risk of CHD. Higher intake of polyunsaturated fatty acids or total fats were not significantly associated with CHD, and the link between saturated fats and CHD appeared weak.

Why The Drop In Heart Deaths?

Trans-fats are the only type of fats that seem to impose more risk for CHD than carbohydrates. There’s no evidence that replacing other types of fats with carbohydrates will reduce risk. So, reducing carbohydrates and increasing fat consumption should not increase the risk of heart disease, unless carbohydrates are replaced by trans-fats. Therefore it is unlikely that the declining death rate from heart disease may be explained by decreased consumption of saturated fat. Furthermore, if trans fats are avoided there is no reason to believe that the popularity of LCHF will trigger a new epidemic of heart disease.

It’s now 2014 and the death rate from CHD continues to decline, despite LCHF being around for quite many years now. If there comes a day when we will see a slowing of the decline or an increase in death rate, I guess many experts will blame changed dietary habits associated with the popularity of LCHF.

In most countries where the death rate from heart disease has fallen, overweight, obesity and type 2 diabetes have increased. Because obesity is strongly linked to cardiovascular risk, many experts are surprised that the incidence and death rate from CHD continue to decline.

Most likely, there is a time lag between the increased incidence of obesity and death rate from CHD. Ultimately, if obesity trends are not reversed, it is unlikely that the decline in CHD mortality will continue.