HAS the death knell of statins finally sounded? I am probably going out on a big limb when I say: ‘Probably and not a moment too soon.’ If anyone can sound it, world-renowned British consultant cardiologist Dr Aseem Malhotra can. Heart disease is, after all, not caused by a deficiency of statins. 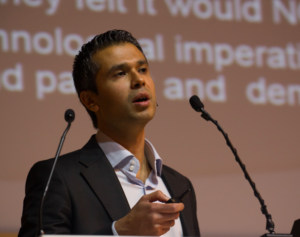 Consultant cardiologist Dr Aseem Malhotra is back in Britain after a whistle-stop, sell-out lecture tour of Australia. It was aptly titled Bring Back The Fat. Malhotra took his usual precision scalpel to eviscerate the powerful vested interests behind statins.

He carefully dissected the controversy that has dogged these cholesterol-lowering drugs. Statins have made billions for pharmaceutical companies and millions for the doctors who still dish them out like smarties. For many patients, statins have made no different whatsoever. In some cases, the drugs may even have done harm.

Malhotra has also, and  once again, focused attention on weaknesses behind a startling recommendation by the UK  National Institute for Clinical Excellence (NICE). NICE is a guideline body and now recommends that most people over 50 should be on statins.

Consequently, medical specialists say, NICE appears to believe that heart disease is caused by a deficiency of statins.

Malhotra referred to an open letter to Britain’s Prime Minister and Health Secretary, which the BMJ published in 2014. He co-authored the letter with Sir Richard Thompson, then president of the Royal College of Physicians, and other prominent doctors.

In it, the authors object vigorously to the NICE guidelines. They say  inter alia that :

The NICE guidelines also ignore independent data showing that otherwise healthy people have no mortality benefit whatsoever from taking statins. In other words, they don’t live even one day longer thanks to taking drugs that have serious side effects.

You’d think that would have been enough to stop NICE in its statin-supporting tracks. However, the doctors have reacted defensively in support of the guidelines.

De Lorgeril, of Grenoble University,  concluded that data from the industry-funded trials “cannot be trusted”. He declared that he would “warn people not to take statins”.

Malhotra told his audience that he would “not go that far”. However, he said that De Lorgeril has made a “very compelling case”.

Demasi is a scientist and science journalist. She has done a pioneering two-part documentary series exposing the statin industry and doctors who collude with it for ABC’s Catalyst programme.

ABC aired both episodes. However, the network later bowed to pressure. It removed the videos from their website, claiming a breach of its “impartiality standards”.

In a study in the Australian Medical Journal last year, researchers claimed that up to 2,900 people may have died of a heart attack as a result of not taking their statin medication after Demasi’s documentary aired.

Malhotra said tht there was “not a single shred of scientific evidence” to back up the claim.

On the contrary, many doctors said that Demasi had “opened their eyes” to the very real risks associated with statins. They also commended Demasi for bravery in taking on the vested interests, Malhotra said.

It’s not clear precisely from where that pressure came. However, an educated guess will likely hit the right target.

Below is a video clip of Malhotra’s presentation on a leg of his Bring Back The Fat tour. It makes riveting listening and reading. Australian nutrition specialist and author Christine Cronau organised the tour.