WANT to live longer, healthier days on this earth? Drink Greek coffee every day on the island of Ikaria. Better still, drink a ‘bulletproof coffee’ daily, one with a dollop of butter and some MCT oil in it on Ikaria, the island whose people ‘forget to die’.  Ikarians are not fat-phobic. They’d consider low-fat yoghurt an oxymoron. And these days their diets fit into the spectrum of low-carb, high-fat lifestyles that are shown to promote longevity. Here’s how and why:

Ikaria is a tiny little island nestling off the Greek mainland in the Aegean Sea close to Turkey. Just 48km long and less than 10km wide, Ikaria is known as “the ancient healing island”. It is also known as  “the island of old age”,  a “hotspot of exceptional human longevity”.

And the “island where people forget to die”.

National Geographic writer and explorer Dan Buettner has made Ikaria one of his five “blue zones”. Those are places where people live measurably longer, healthier, and happier, lives. (The others: Okinawa in Japan, Loma Linda in California, Sardinia in Italy and the Nicoya Peninsula in Costa Rica.)

Ikaria is tops with “more healthy people over 90 than any other place on the planet”, says Buettner. He is  author of The Blue Zones: Lessons for Living Longer from the People Who’ve Lived the Longest (National Geographic).

One in three Ikarians reaches 90 and almost always in excellent health. Consequently, they are generally very happy people. They also have much lower rates of cancer and heart disease compared with the rest of Greece, western Europe, and the US. There is virtually no dementia, and most Ikarians maintain active sex lives till the very end.

The Ikarian diet is a version of the so-called “Mediterranean diet”. Buettner says it used to be very high-carb, mostly plant food. However, it has evolved, and is a breeze for vegetarians and vegans. And these days it easily fit within the spectrum low-carb, high-fat (LCHF) lifestyles that are shown to promote longevity.

Riveting read: NOAKES: THE IDIOT’S GUIDE TO LCHF AND BANTING

In fact, it fits into any diet lifestyle you choose:

That’s because the islanders eat “real” food, as close to its natural state as possible, including organic, pasture-fed meats. They are not “fat-phobic” – a low-fat yoghurt would be inexplicable, an oxymoron to Ikarians. They don’t eat refined, adulterated, processed carbs – the ones implicated in the epidemics of “diseases of lifestyle”, such as obesity, diabetes, heart disease, cancer and more recently dementia, that are currently plaguing the planet.

American-Greek celebrity chef Dianne Kochilas calls the Ikarian diet  “naturally flexitarian before the word was ever invented”. She should know. 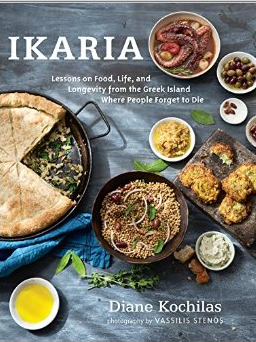 Kochilas is owner of the Ikaria Cooking for Life cooking school. She is also author of Ikaria: Lessons on Food, Life, and Longevity from the Greek Island Where People Forget to Die (Rodale). I highly recommend it. It makes tasty reading. Therefore, it is a  worthwhile addition to your bookshelf, Kindle- or  iPad-shelf, or whatever else your reading platform is these days.

In a blog on the topic, Kochilas says Ikarians eat local and seasonal. Many “still forage for wild foods, from nutritionally dense edible greens, weeds, and herbs to mushrooms,” she says. These would  “sell for a prize in any American gourmet market, looking for the likes of fiddlehead ferns, borage, purslane, nettles, thin wild asparagus, thistles, pennyroyal, salsify”.

She also says the US Department of Agriculture has published “many a manual on how to kill the very same plants, considered pests”.

Ikarians eat antioxidant-rich goat’s milk and cheeses, says Kochilas. They also eat pure, raw pine, thyme, blossom, and “heather honeys”. The islanders use homegrown honey not just for food, but also as medicine, for cuts and scrapes to colds and flu and even hangovers. Websites are expansive in its praise, calling Ikarian honey “legendary”. And of “particularly high quality due to the unique geographical and topographical attributes found on the island”.

Kochilas says that Ikarians enjoy fresh fish and goat as the main source of animal protein. They also eat “a bevy of legumes and vegetables at every time of the year, including the much-maligned potato and taro root, both foods of survival that still have a delicious place on the table”. Most of the islanders also “make their own wine and readily share it with others”. 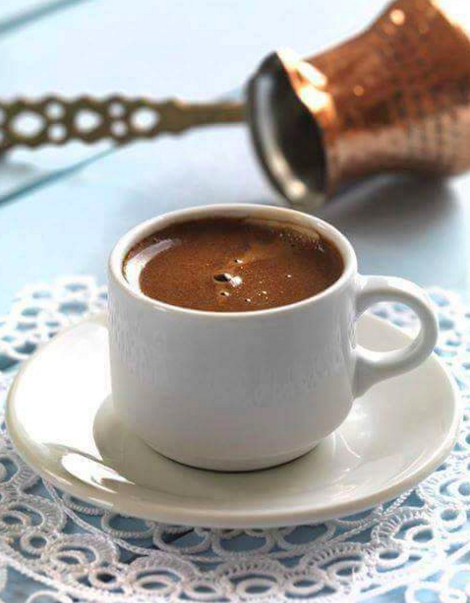 Cardiologists at the University of Athens Medical School, in a study in Vascular Medicine in March 2013 have speculated that Greek coffee could be the reason for Ikarian’s healthy hearts. They say 90% of Ikarians drink  the rich thick brew of roasted, finely ground coffee beans daily.

When made in the traditional way –  boiled first on the stove in a small pot called a “briki”. That’s usually with sugar, and served black, in a small cup, with foam on the top. Not surprisingly, it can feel like a shot of caffeine straight into the jugular. The coffee grains settle on the bottom of the cup, like a dollop of thick mud.

Diviners often use the sediment for fortune-telling, a practice known as tasseography or tasseomancy, or in Greek, kafemandeia.

It’s not yet clear what Greek coffee’s mechanism of action is that keeps hearts strong.  University of Athens researchers, led by cardiology professors Dr Christodoulos Stefanadis and Dr Gerasimos Siasos, have an idea. They say that “chronic consumption” of Greek coffee is associated with “improved endothelial function in elderly individuals with an increased burden of cardiovascular risk factors”.

The endothelium is a layer of flat cells lining the inside of blood vessels in every organ of your body, as well as lymphatic vessels (that convey the lymph, a milky fluid), and your heart. It’s a gatekeeper that regulates the flow of nutrient substances – biologically active molecules and blood cells themselves. As a result, these are  critical in regulating blood flow and vascular function.

Endothelial function reflects the health of the vessel wall, the researchers say, and is key to cardiovascular health. When endothelial function is good, it boosts the body’s defences against life-threatening diseases such as heart attack and stroke.

Siasos says caffeine on its own can reduce endothelial function. However, Greek coffee is rich in polyphenols and antioxidants, with only moderate amounts of caffeine, compared with other coffee beverages, which may explain why it doesn’t.

Ikarians also drink wild herbal teas, including a “mountain tea”. It’s a healthful mix of rosemary, mint, marjoram, sage and dandelion. It is also part of folk remedies, with properties that include diuretics that help control or bring down blood pressure.

Many other factors, apart from Greek coffee, explain Ikarians’ longevity. One of those is regular exercise. Ikaria is mountainous, with air that is good, and clean and fresh. It’s difficult to get through a day in the island “without walking up 20 hills”, says Buettner.

There’s also that very Mediterranean tradition, the daily siesta that follows a main meal at lunchtime. Research shows that it helps with digestion. And with the post-prandial drowsiness that is a normal insulin response after a heavy meal.

A 2007 study in the Archives of Internal Medicine, of more than 23,000 Greek adults, led by Dr Dimitrios Trichopoulos of the Harvard School of Public Health, found that those who took a midday nap were 30% less likely to die of heart disease.

Afternoon naps on Ikaria are part of “Greek time” — an idiosyncratic approach to time and punctuality that can be annoying to outsiders, and anathema to clock-watching and deadlines.

As Buettner writes: “It’s easy to get enough rest if no one else wakes up early, and the village goes dead during afternoon naptime.”

And of course just living in paradise helps.